On Saturday, two fields of three-year-olds went 1 mile in two divisions of the $250,000 Southwest Stakes (G3) at Oaklawn Park, a major local prep for the Arkansas Derby and an important race for graded stakes earnings to make the Kentucky Derby field. Condtions were excellent for this Presidents' Day feature, with 29,313 fans on hand enjoying the sunny skies and temperatures in the low 60's.

A field of eleven went to post in the first division, with Sham Stakes (G3) third place finisher Longview Drive sent off as the lukewarm 3-1 choice over 7-2 second choice Unbridled's Note, winner of his debut at Churchill Downs in October. Smarty Jones Stakes winner Junebugred was the 4-1 third choice on the toteboard. 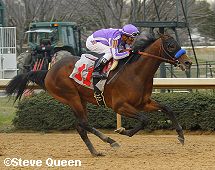 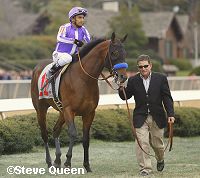 Left: Castaway in the winner's circle. Jimmy Barnes, assistant to trainer Bob Baffert said, "Everyone said we drew bad when we got the 11, but I wasn't that bothered by it," said Baffert's assistant, Jimmy Barnes. "You put them in from the rail out, so they're not in the gate that long. Rafael (Bejarano) did a good job getting him out of the gate and getting over to the rail. I knew we brought two good horses and this one had been getting over the track great all week."

Right: Castaway in the post parade. Jockey Rafael Bejarano said, "I thought he won pretty easy. I was right where I wanted to be, especially at the end." 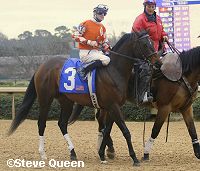 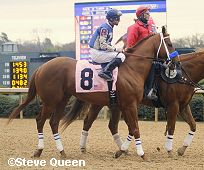 Left: Second place finisher Jake Mo in the post parade. Trainer Allen Milligan said, We had sort of a bad trip, got shuffled to the back. (Jockey) Cliff (Berry) did everything we could ask him to do."

Right: Third place finisher Reckless Jerry in the post parade. The 9-2 fourth choice stalked the pace 4th saving ground under jockey Shane Laviolette, then came out wide for the drive to get third beaten 4 1/4 lengths. The Kenny Smith trainee improved his record to 2 wins, 2 seconds, and 3 thirds in 7 starts, earning $145,515 for owner-breeder Dream Walkin' Farms and Lanita Davis. 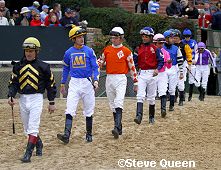 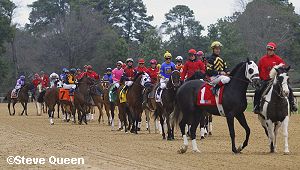 Left: All the jockeys for the first division of the Southwest walking over to the outside saddling area before the race.

Right: The post parade for the first division of the Southwest showing all the horses.


In the second division of the Southwest Stakes (G3), Breeders' Cup Juvenile Sprint winner Secret Circle sent off as the 3-5 favorite in the field of 10, off a second place finish in the Sham (G3) at Santa Anita. In to challenge him included 5-1 second choice Cyber Secret, winner of an allowance at Oaklawn last out, and 6-1 third choice Adirondack King, off a third place effort in the Pasco Stakes at Tampa Bay.

Jockey Luis Quinonez sent 10-1 Scatman to the lead immediately and he set fractions of 23.21, 46.81, and 1:11.25 while pressed by Secret Circle 1/2 length back and to his inside. The duel continued into the lane, but in the final strides Secret Circle was able to pull ahead for the 1/2 length victory in 1:37.08. It was a long 5 1/2 lengths back from Scatmn to late-running Adirondack King third. 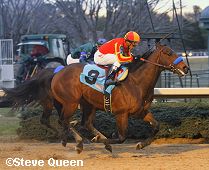 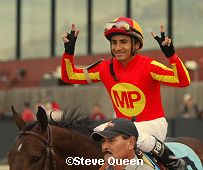 Left: Secret Circle in the winner's circle. Co-owner Paul Weitman said, "This horse tries every time. I was a little nervous at the end, but he dug in and got there. It's always fun to come here. It's one of my favorite places. We'll leave his next start up to Bob (Baffert). He's the coach."

Right: Winning jockey Rafael Bejarano celebrates the win aboard Secret Circle. Bejarano said, "When I asked him to run, he had more left than I expected. He showed a lot of heart today and I'm very pleased with his effort." 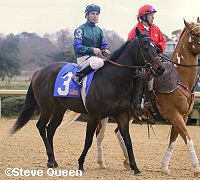 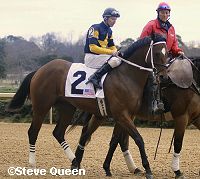 Left: Second place finisher Scatman in the post parade. Trainer Mike Lauer said, "He ran a big race, but he just got beat. Turning for home I thought we were alive. We knew he'd have to step up to run well in here, but we wanted to stay here. There was no reason to really look elsewhere. We felt he had a big chance. Now we'll get him back and reevaluate to see what the next step is."

Right: Third place finisher Adirondack King in the post parade. The 6-1 third choice was unhurried nith 5 1/2 lengths back under jockey Stewart Elliott, then rallied 6 wide to get third beaten 6 lengths. The John Servis trainee improved his record to 3 wins, 1 second, and 3 thirds in 7 starts, earning $169,610 for owner Marchfore Thoroughbreds.

The post parade for the first division of the Southwest showing all the horses.