The highlight race of the Louisiana Downs meeting is the $200,000 Super Derby, celebrating its 38th anniversary this year. However, after 37 editions run over the main dirt track at Louisiana Downs, for 2017 the race was switched to turf and the distance reduced to 1 1/16 miles, resulting in the race losing its graded stakes status. After the scratch of Gorgeous Kitten, a field of just 5 three-year-olds faced the starter on Saturday afternoon under clear skies and temperatures in the low 80's. As expected Mr. Misunderstood was sent off as the 7-10 favorite off his win in the Super Derby Prelude Stakes , the main local prep for this race. In to challenge him included 3-1 second choice Sonneteer, 16th in the Kentucky Derby (G1) 3 starts back and here off his maiden win at Del Mar, and 4-1 third choice Fast Talkin Man, second in the Prelude after finishing 5th in the Assault Stakes at Lone Star.

Jockey Roberto Morales sent 9-2 fourth choice Phat Man to the lead first time by and he set fractions of 25.32, 50.66, and 1L14.57 over the firm going while pressed by Sonneteer and stalked by Mr. Misunderstood. Entering the lane, jockey Chris Rosier sent Mr. Misunderstood, 3 wide throughout, to the front getting 1 mile in 1:37.13. Kept to task by Rosier, Mr. Misunderstood drew off late to win by 3 lengths in 1:42.91. It was another 2 lengths back to Sonneteer third. Fast Talkin Man trailed throughout, took a bad step on the far turn, was pulled up by jockey Luis Quinonez at the 3/16 pole, vanned off, and later euthanized. Jockey Gerard Melancon aboard Sonneteer claimed foul against Roberto Morales aboard Phat Man for interference in the stretch but the stewards disallowed the claim and the result stood. 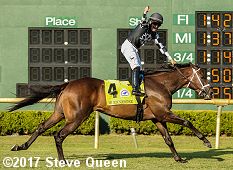 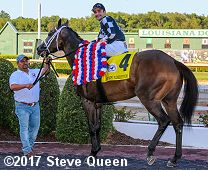 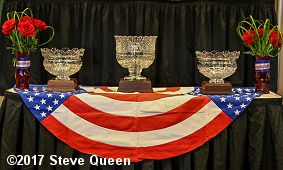 Left: Mr. Misunderstood in the winner's circle. Winning owner Staton Flurry said, "We gave the horse a little break after the Illinois Derby and thought the Prelude would be an easier spot than (in) Kentucky. He ran superb in the Prelude, and he came out of the race very well. I was surprised Sonneteer went early, but Chris knew he had a lot of horse. He said he felt like he exploded like a stick of dynamite." Trainer Brad Cox added, “He was training great coming into this race. Last time we thought he might need the race, even though he won. We thought he kind of needed the race as a tightner coming off the layoff. He ran a big race today. I’m very proud of his effort. He’s probably going to stay on the grass, being undefeated on it.”

Winning jockey Chris Rosier said, "I have watched the Super Derby since I was a kid, so winning this means the world to me. Crossing the finish line was just sheer love and passion. My dad was here and I am so happy for Staton. We are good friends and he gave me the chance to ride this amazing horse." 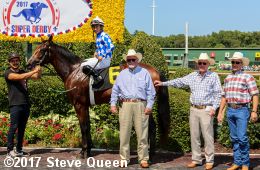 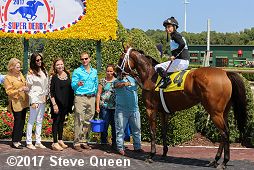 Kicking off the stakes action, the $60,000 River Cities Stakes featured a field of 5 older fillies and mares going 1 1/16 miles on the turf. Quinta Verde was the 4-5 favorite over 9-10 Illusionofreality and 9-1 Smiley Briley. 38-1 longest shot Brookie was quickest away through an opening quarter of 24.06 over Quinta Verde and Illusionofreality dueled to the lead through fractions of 48.25, 11:85, and 1:36.46. In deep stretch, Illusionofreality tired as Quinta Verde, kept to task by Diego Saenz, drew off to win by 3 1/4 lengths over late-running Smiley Briley in 1:43.32. It was another 3/4 length back to 30-1 Pera third. 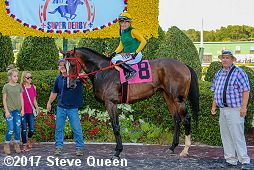 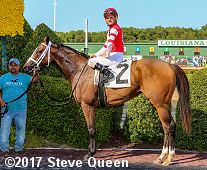 The $75,000 Happy Ticket Stakes featured 2-year-old fillies going 1 mile on the turf. Lady O'Toole was the 6-5 favorite in the field of 12 over 7-2 Rosie O'Prado and 11-2 Frisco Girl. Jockey Kerwin Clark sent 11-1 Chloe Raven to the front first time by through fractions of 23.43 and 47.78 while pressed by 16-1 Taylor's Princess and stalked by Lady O'Toole and 22-1 Caroline the Great. Rounding the turn, jockey Colby Hernandez asked Lady O'Toole to go to the front and she obliged through 7f in 1:25.51. Kept to task by Hernandez, Lady O'Toole drew off to win by 3 1/2 lengths over Caroline the Great in 1:37.03. It was a neck back to late-running Rosie O'Prado third. 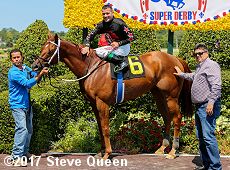 The $50,000 Need For Speed Stakes featured a field of 9 older horses sprinting 5 furlongs on the turf. 5-2 second choice Wings Locked Up set the early pace of 22.38 and 45.00 while pressed by 28-1 Biblical Strength and stalked by 9-5 favorite Icy Gentleman In the stretch, Wings Locked Up continued to lead but 4-1 third choice Eden Grey's Kitten, 4th early under Gerard Melancon, rallied to win by a neck in 56.36. It was another 1 1/4 lengths back from Wings Locked Up to 13-1 Sir Genghis third, and another length back to favorite Icy Gentlemen fourth. 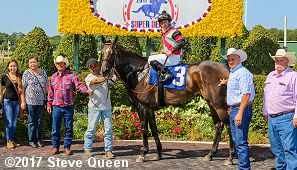 The $50,000 Tellike Stakes featured a field of 8 older fillies and mares sprinting 5 furlongs on the turf. 9-2 D'boldest was quickest away through an opening quarter in 22.14 before 25-1 Our Valor took over on the turn through a half in 44.51. Opening up a 2 length lead midstretch she looked homefree but 7-5 favorite Justa Lady, 4th early under Diego Saenz, came out for room and rallied to win by 3/4 length in 56.13. It was another 1/2 length back to 7-1 Boom Bam Bing third.