The highlight race of the Louisiana Downs meeting is the $500,000 Super Derby (G2). A field of 7 three-year-olds went 1 1/8 miles on the main track in Bossier City on Saturday, under sunny skies and temperatures in the high 90's. Illinois Derby (G3) winner Departing was sent off as the 3-10 favorite off his win in the West Virginia Derby (G2) after a disappointing 6th in the Preakness (G1). In to challenge him included 6-1 second choice Bashaar, fourth in the Jim Dandy (G2), and 8-1 third choice Cameo Appearance, third in the Straight Line at Arlington last out.

Jockey Scott Spieth sent 16-1 Ruler of Love to the lead first time by and he set fractions of 23.76, 49.29, and 1:13.35 over the fast track while stalked by Cameo Appearance 1 1/2 lengths behind. On the far turn, Departing, 5th early, came out wide for room and gained the lead at the top of the lane, getting the mile in 1:36.99. In the final furlong he drew away to finish 4 lengths in front of Ruler of Love in 1:50.08. It was another 3 lengths back to Cameo Appearance third. 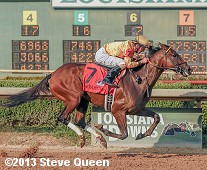 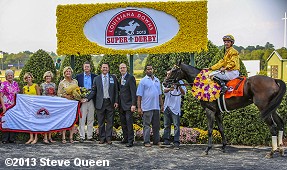 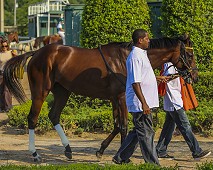 Left: Departing in the winner's circle. Trainer Al Stall Jr. said, "I like the way he traveled the first turn, better than he'd done in the Illinois Derby and the West Virginia Derby," Stall said. "I also like that his head wasn't quite up in the air looking around towards the end. So, I saw a lot of mental progress in the race." Departing will go next in the Oklahoma Derby. "It's a great fit. It's a Grade 3, the money is good, and geographically, it works out. If he's ready, we'll be there. He's going to get a breather, with a goal of being, hopefully, a top handicap horse next year. He's getting very consistent. He breaks, he lays comfortable. You can see the rider's got him in his hands. He creeps up in hand, and he kicks it. And he's learning to kick it a little better, too." Stall is the first trainer to win the Super Derby three times, after My Pal Charlie (2008) and Apart (2010).

Right: Departing comes over from the barn before the race. Jockey Robby Albarado said, "I just wanted to get away from the gate clean. I was loving that outside post. They went a little slow the first half, but sprinted home nice. He was well within himself." 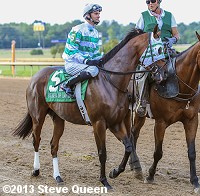 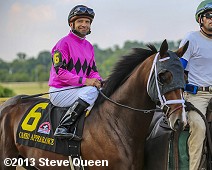 Left: Second place finisher Ruler of Love in the post parade. The 16-1 shot set the pace under jockey Scott Spieth, but was no match for the winner. The Joan Scott trainee improved his record to 2 wins, 3 seconds, and 3 thirds in 12 starts, earning $343,875 for owners Matthew Rebro Jr., Frank Coniglio, Sidney Ritman, and Richard Rendina. 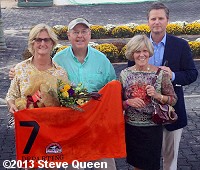 Trainer Al Stall Jr. (far right) is the first trainer to win three Super Derbies. He said, "Without question, I get a different feeling walking into this place. There is a lot of history here. Being from Louisiana – it's on the back of my mind to keep this on my schedule if we have the right kind of horse. This is the sixth year in a row we've run in this race. This is a race that has survived for 34 years – that doesn't happen. You see races come and races go. The money has changed, the distance has changed, the grade has changed, they moved it to different spots on the calendar to try to survive – I have to give Louisiana Downs and Harrah's credit. To keep this thing alive is not as easy as it seems." 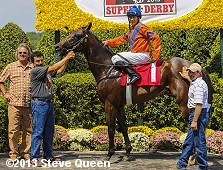 Kicking off the stakes action on Saturday, a field of 7 two-year-olds contested the $100,000 Sunday Silence Stakes at 1 mile on the turf. Got Shades was sent off as the 3-10 favorite over 5-1 Mighty Brown and 6-1 Thunder Run. 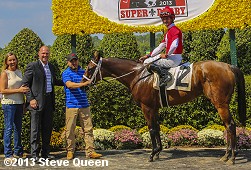 The $100,000 River Cities Stakes featured a field of 7 older fillies and mares going 1 1/16 miles on the turf. Artemus Kitten was the 11-10 favorite over 7-2 Grandma's Rules and 4-1 Miss Addison. 6-1 Queenie Vic went to the lead through fractions of 24.28, 48.08, and 1:11.78 while pressed by Grandma's Rules. At the top of the lane, Grandma's Rules was asked by jockey Robby Albarado and she easily took over, drawing off late to win by 2 1/2 lengths over Queenie Vic in 1:42.06. It was another length back to Miss Addison third, while Artemus Kitten failed to respond when asked and finished last. 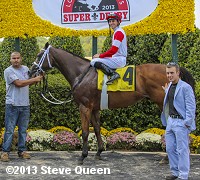 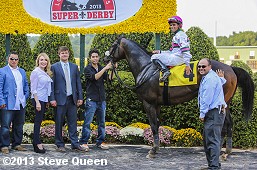 Just 5 older horses went to post in the $50,000 Temperance Hill Stakes at 6 furlongs on the main track. Last year's winner Gantry was the 2-5 favorite over 5-2 Louisiana Glory and 7-1 Joe Hollywood. Jockey Robby Albarado sent Joe Hollywood to the lead through fractions of 22.60 and 45.10. Around the turn, Gantry, who stalked the pace in 3rd early, came out for room and easily took over the lead through 5/8 in 56.93, then drew off to win by 4 1/2 lengths over Louisiana Glory in 1:09.60. It was another 3 1/2 lengths back to Joe Hollywood third. 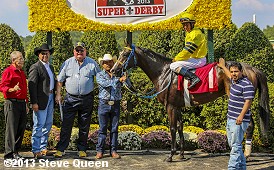