Breeders' Cup Challenge Series "Win and You're In" weekend at Woodbine concluded on Sunday with two Grade 1 races for 2-year-olds on the turf, each contested at 1 mile around 1 turn of the E.P. Taylor Turf Course. Conditions were typical for late September with sunny skies and a temperature of 21 C (70 F), and the Taylor course remained good-to-firm as it was on Saturday (GoingStick reading of 10.6).

A field of 9 two-year-old males contested the $400,000 Summer Stakes (G1) looking for automatic entry into the Breeders' Cup Juvenile Turf at Del Mar on November 5. Albahr was sent off as the 3-5 favorite off a 3 race win streak including the Stonehenge Stakes at Salisbury. In to challenge him included 4-1 second choice Dripping Gold, a debut winner at Saratoga last out, and 7-1 third choice First Empire, winner of 2 straight including the Soaring Free, the main local prep for this race.

Jockey Patrick Husbands sent First Empire to the front down the backstretch through fractions of 23.95, 47.93, and 1:12.17 while pressed by 39-1 Heat Merchant and stalked by 14-1 Degree of Risk. Turning into the stretch, Albahr, 7th early after hopping out of the start, came out for room and took over at the 1/8 pole through 7f in 1:23.63. Kept to task by Frankie Dettori, Albahr drew off late to win by 2 1/4 lengths over late-running 9-1 fourth choice Grafton Street in 1:35.77. It was another 1 1/2 length back to Degree of Risk third. 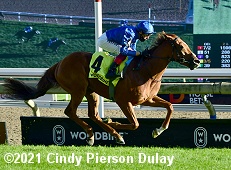 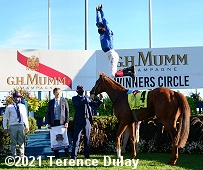 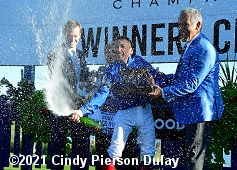 Left: Frankie Dettori leaps off Albahr in the winner's circle. Alex Merriam, assistant to winning trainer Charlie Appleby said, "They've gone hard up front. Frankie gave a great ride. He had a good trip around, and kicked on and put a good distance between them. It was impressive. That's really what it's all about, winning these big races around the world. So just like him it's for Charlie and all the team. It's been a great effort. Albahr had been in decent form, he's tough. He's got a tendency to go left as well, so he'll be suited for Del Mar."

Right: Frankie sprays everyone with champagne in the winner's circle. 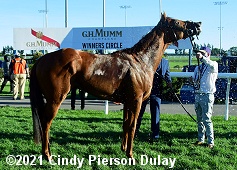 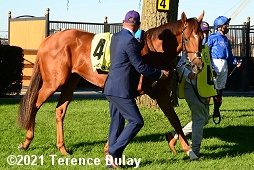 Left: Albahr gets hosed off after the race.

Right: Albahr in the paddock before the race. Frankie Dettori said, "He's got a tendency to go left as well, so he'll be suited for Del Mar. For the filly, she needs more luck, because as you see she wasn't that fast with those, but they were both great today, and have both earned their shots." 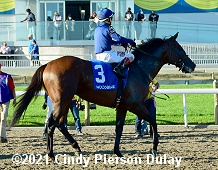 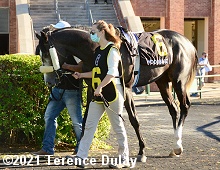 Right: Third place finisher Degree of Risk in the paddock before the race. The Eoin Harty trainee improved his record to 1 win, 1 second, and 1 third in 4 starts, earning $69,712 for owner-breeder Godolphin.


Immediately before the Summer, a field of 10 two-year-old fillies contested the $400,000 Natalma Stakes (G1), with the winner earning a berth in the Breeders' Cup Juvenile Fillies Turf. Wild Beauty was sent off as the 7-5 favorite off second place finishes in the Star Stakes at Sandown and the Sweet Solera Stakes (G3) at Newmarket. In to challenge her included 7-2 second choice Pizza Bianca, a debut winner at Saratoga last out, and 9-2 third choice Diabolic, undefeated winner of the My Dear and the Catch a Glimpse, the local prep for this race.

At the start Wild Beauty hit the starting gate and then was squeezed by 19-1 Baksheesh to her outside and 26-1 Royal Engagement to her inside, causing her to trail the field by 10 lengths. Jockey Justin Stein sent 40-1 Cardio Princess to the lead and she set fractions of 23.35, 47.03, and 1:11.44 while pressed by 69-1 longest shot Guileful and stalked by 14-1 Ready Lady. Turning for home, jockey Frankie Dettori aboard Wild Beauty found room between horses 3 wide, then came out 8 wide to sweep to the front through 7f in 1:23.11. Under a hand ride Wild Beauty drew off to win by 2 1/4 lengths in 1:35.08. It was another 1 1/4 lengths back to late-running 5-1 fourth choice Eminent Victor third. 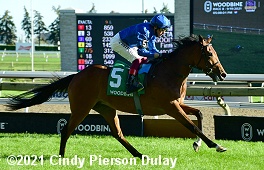 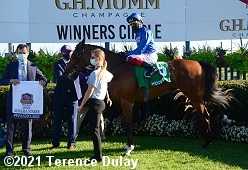 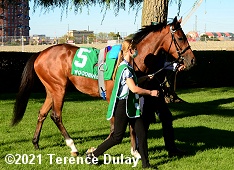 Left: Wild Beauty in the winner's circle. Alex Merriam, assistant to winning trainer Charlie Appleby said, "Look, (the start) was a bit of a worry. Seemed to me, when she broke on turns, she stumbled a bit. We'll have to watch it again and see what Frankie says. We'll have to wait until they get her home. See how she comes out of it. Look, she really was impressive there and we'll have to get home to see what Charlie wants to do and make a plan from there. I'm sure he'll have an idea of what he wants to do there anyway. The filly's tough. She'll take everything at Del Mar, the tight turns."

Right: Wild Beauty in the paddock before the race. Winning jockey Frankie Dettori said, "She just backed out of that pocket. Then for my luck, they went way too fast, and by the time we got to the quarter pole, it all just fell into my lap and she picked up really well. (At the Breeders' Cup) you rely very much on the draw, it's a full field of 14 runners, the (Del Mar) straight is half of the size of this, so you need all the luck. She's definitely good enough to take part, but you need to be lucky at Del Mar." 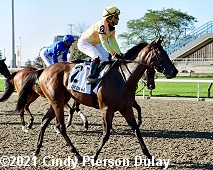 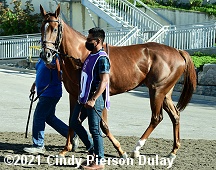 Right: Third place finisher Eminent Victor walks over before the race. The Chad Brown trainee improved her record to 1 win and 1 third in 2 starts, earning $49,317 for owners Michael Dubb, The Elkstone Group, and Louis Lazzinnaro. 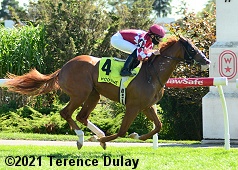 Kicking off the stakes quartet on Saturday was the $125,000 Ontario Racing Stakes for 2-year-olds sprinting 5 furlongs on the inner turf course which was rated firm (GoingStick 11.5). Diamond City, still a maiden after finishing 3rd in both his starts, was sent off as the 4-5 favorite in the field of 5 over 4-1 Feelthebeat, 6th in the Victoria Stakes, and 9-2 San Constantino, a debut winner at Presque Isle last out.

San Constantino and Feelthebeat dueled down the back and around the turn through an opening quarter of 22.27. Turning for home, the pace battle took its toll as Diamond City, who stalked the pair in third under Emma-Jayne Wilson, swept to the front through a half in 45.66, and drew off to win by 1 3/4 lengths over 11-2 fourth choice Silent Runner in 57.68. It was another 2 3/4 lengths back to San Constantino third. 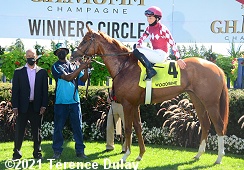 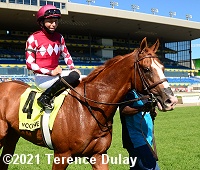 Left: Diamond City in the winner's circle. The Mark Casse trainee improved his record to 1 win and 2 thirds in 3 starts, earning $71,341 for owner D.J. Stable. 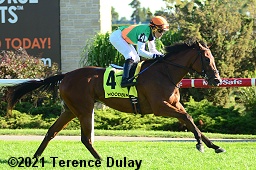 Immediately before the Natalma was the $125,000 Woodbine Cares Stakes for 2-year-old fillies also sprinting 5 furlongs on the inner turf. After 1 scratch, Bolton Landing Stakes at Saratoga 5th place finisher Derrynane was sent off as the 7-4 favorite in the field of 6 over 11-4 Fulminate, 9th in the Bolton Landing, and 3-1 Fifth Anniversary, a maiden winner at second asking last out.

Jockey Rafael Hernandez sent Fulminate to the lead down the back and around the turn through fractions of 21.96 and 44.89 while pressed by Fifth Anniversary and stalked by 16-1 longest shot Forest B. In deep stretch Fulminate tired badly as favorite Derrynane, 5th early, swept to the lead at the 1/16 pole and drew off late under Joel Rosario to win by 2 3/4 lengths over Fifth Anniversary in 57.04. It was another 3/4 length back to 7-1 Dufresne third. 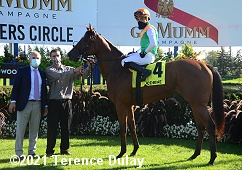 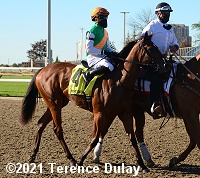 Right: Derrynane returns after the race. 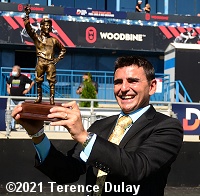 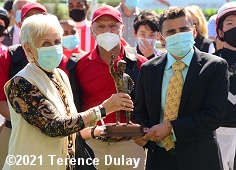 Eurico Rosa da Silva, one of Canadian Thoroughbred racing's most accomplished riders and popular personalities, has been named the 2021 recipient of the Avelino Gomez Memorial Award. The coveted Gomez Award is given to the person, Canadian-born, Canadian-raised or regular rider in the country for more than five years, who has made significant contributions to the sport. It is named in memory of one of the sport's most heralded and loved performers. The Cuban-born Gomez died of complications after a three-horse accident in the 1980 Canadian Oaks. The ceremony is traditionally held on Oaks day but in order to have fans as well as the Gomez and Da Silva families present, Woodbine postponed it to September as Covid restrictions were much tighter in June.

Da Silva, a native of Săo Paulo, started riding in his native Brazil and then in Singapore and Macau before finding his way to Woodbine. He won seven Woodbine riding titles including 5 straight leading to his retirement in 2019. He won 2 Queen's Plates including 2010 aboard Big Red Mike, with Queen Elizabeth II on hand to award the trophy, as well as upset rides in both the Woodbine Mile (El Tormenta, 2019) and Canadian International (Bullards Alley, 2017). He was the regular rider of four Canadian Horses of the Year, Pink Lloyd (2017), Up With the Birds (2013), Biofuel (2010) and Fatal Bullet (2008), and won the 2017 World All-Star Jockeys Championship in Japan. Quite fittingly, his final ride was a stakes winner, in the Valedictory Stakes on 2019 closing day.