Breeders' Cup Challenge "Win and You're In" weekend at Woodbine concluded on Sunday with two Grade 1 races for 2-year-olds on the turf, each contested at 1 mile around 1 turn of the E.P. Taylor Turf Course. Conditions were typical for late September with sunny skies and a temperature of 16 C (61 F), and the Taylor course remained firm as it was on Saturday (GoingStick reading of 11.8).

A field of 7 two-year-old males contested the $250,000 Summer Stakes (G1) looking for automatic entry into the Breeders' Cup Juvenile Turf at Keeneland on November 6. Gretzky the Great was sent off as the 5-2 favorite off a 2 race win streak including the Soaring Free Stakes last out. In to challenge him included 11-4 second choice American Monarch, a debut winner at Saratoga on August 8, and 7-2 third choice Secret Potion, who was second behind American Monarch in the same debut race. 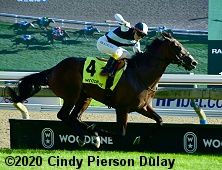 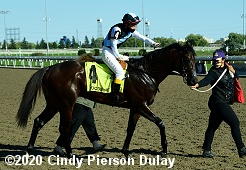 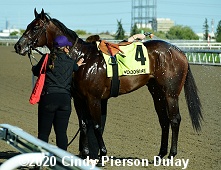 Left: Gretzky the Great heads to the winner's circle. Winning jockey Kazushi Kimura, celebrating his first Grade 1 win, said, "He's such an amazing horse. When I came to the straight, he had tremendous explosion. He was a little bit lugging in, but he's still a baby, you know. If I want to do something (with him), I can do anything."

Right: Gretzky the Great gets hosed off while the stewards review the inquiry. Kimura added, "First time out it was only five furlongs on the (Woodbine inner) turf, then when he won the first time I was like, 'Oh, that will be a stakes horse for the future. And then winning a stakes and now got a Grade 1, he's such a nice horse." 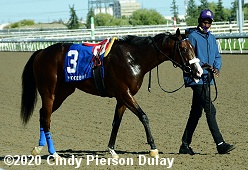 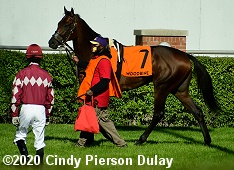 Left: Second place finisher Ready to Repeat circles while the stewards review the inquiry. He improved his record to 2 wins, 2 seconds, and 1 third in 5 starts, earning $133,342 for owner-trainer Gail Cox and co-owners John Menary, Michael Ambler, and Windways Farm.

Right: Third place finisher Dolder Grand in the paddock before the race. The Mark Casse trainee improved his record to 2 thirds in 2 starts, earning $26,839 for owner D. J. Stable.


An hour after the Summer, a field of 7 two-year-old fillies contested the $250,000 Natalma Stakes (G1), with the winner earning a berth in the Breeders' Cup Juvenile Fillies Turf. Lady Speightspeare was sent off as the 5-2 favorite off her debut win on August 22 over the Woodbine course. In to challenge her included 11-4 second choice Alda, winner of 2 straight including the Catch a Glimpse Stakes last out, and 4-1 third choice Dreaming of Drew, 2nd behind Alda in the Catch a Glimpse. 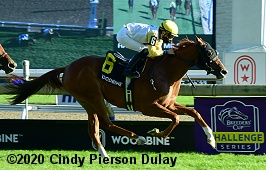 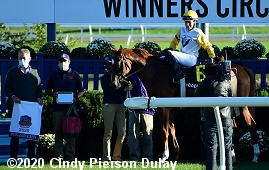 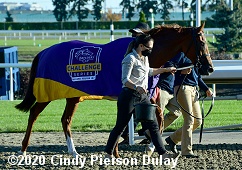 Left: Lady Speightspeare in the winner's circle. Winning jockey Emma-Jayne Wilson said, "She went to the lead with such intent, I think it was the same thing today in the gate. She knew it was coming, they yelled ‘last one,' she was anticipating the doors to open so she popped up a little. But kudos to the gate crew here at Woodbine, they kept her straight and steady so, despite her rearing, she didn't manage to get herself hung up or hurt in any way, which meant she was able to compete and win today. She knew that she was going to get a chance to run and I had a chance to let that horse cross over and just put her right on her flank and she settled into stride, got into rhythm and, man, when they started to come to her, just like last time, she really leveled off and dug in."

Right: Lady Speightspeare heads back to the barn after the race. Winning trainer Roger Attfield said, "That's always nice to see. When you break your maiden and you're going into a race like this off of going wire-to-wire you really haven't had any education or anything going into something like this so it was nice to see that for sure. (Going to the Breeders' Cup) would be up to Mr. Fipke, and I would say knowing Mr. Fipke we probably are." 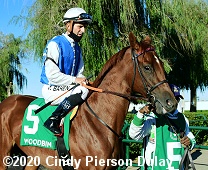 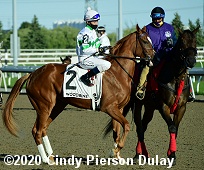