Woodbine Mile weekend kicked off on Saturday with two Breeders' Cup Challenge "Win and You're In" races for 2-year-olds on the turf, each contested at 1 mile around 1 turn of the E.P. Taylor Turf Course. Conditions were excellent with sunny skies, temperatures in the low 60's, minimal wind, and a firm course.

A field of 9 juveniles went to post in the $200,000 TVG Summer Stakes (G2) looking for automatic entry into the Breeders' Cup Juvenile Turf, with School On a Hill sent off as the 3-1 favorite off his debut win over the same distance at Arlington. In to challenge him incluced 7-2 second choice Matador, fourth in his career debut in the Vandal Stakes last out, and 9-2 third choice Tropic of Artie, a close second in a maiden after finishing 7th in his debut in the Colin Stakes.

Jockey Patrick Husbands sent Tropic of Artie to the lead down the backstretch and he set fractions of 23.27, 46.29, and 1:10.89 while pressed by 11-2 Asserting Bear. At the top of the lane, the leading pair both tired, as 5-1 fourth choice My Conquestadory, the only filly in the field and also the only first time starter, easily took command at the 3/16 pole. Kept to task by jockey Eurico Rosa da Silva, she drew off to win by 3 1/4 lengths over late-running 27-1 Go Bro in 1:34.81. It was a head back to Matador third, while favorite School on a Hill checked in seventh.

Also on the card was the Natalma Stakes (G2) won by Llanarmon. 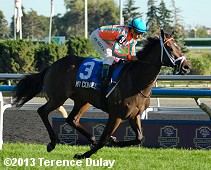 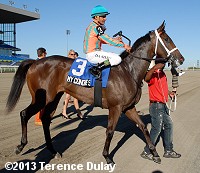 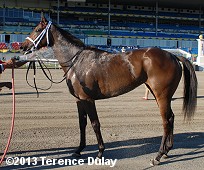 Left: My Conquestadory heads ti the winner's circle. Winning jockey Eurico Rosa da Silva said, "I didn't think about losing the race. It never came to my mind that she could be beat. I had great confidence in her and the whole (Casse) team said how nice she is. She's a great filly."

Right: My Conquestadory gets hosed off after the race. As a filly, she earns a spot in the Breeders' Cup Juvenile Fillies Turf as the Juvenile Turf is restricted to colts and geldings. 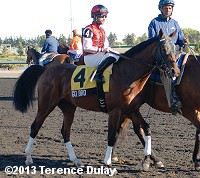 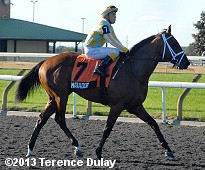 Left: Second place finisher Go Bro in the post parade. The 27-1 shot was last early under jockey Tyler Pizarro then rallied late to get second. The Mike Keogh trainee improved his record to 0 wins, 1 second, and 0 thirds in 2 starts, earning $46,750 for owner-breeder Gus Schickedanz. 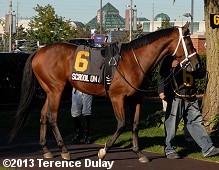 Seventh finisher and beaten favorite School On a Hill in the paddock. The 3-1 favorite raced 8th early under jokey Emma-Jayne Wilson but failed to rally, finishing 7th beaten 10 3/4 lengths. The Wayne Catalano trainee has a record of 1 win, 0 seconds, and 0 thirds in 2 starts, earning $24,732 for owners James Covello, Millennium Farms, and West Point Thoroughbreds.


Earlier in the card, a field of 8 three-year-old fillies contested the $200,000 Natalma Stakes (G2), with the winner earning a berth in the Breeders' Cup Juvenile Fillies Turf. Ready to Act was sent off as the 8-5 favorite off her debut win at Saratoga. In to challenge her included 5-2 second choice Appreciating, off her debut win at Woodbine, and 8-1 third choice Spring Likeacobra, a maiden winner last out after finishing 6th in her debut in the My Dear Stakes.

Jockey Justin Stein sent 10-1 Unspurned to the lead and she set fractions of 23.89 and 47.04 while stalekd by Ready to Act. Entering the stretch, Unspurned tired allowing Ready to Act to inherit the lead. Jockey Rajiv Maragh aboard Ready to Act went to the right-handed whip at the 1/8 pole after opening up a 2 length lead, but the filly veered in sharply towards the temporary inside rail, unseating Maragh. 9-1 Llanarmon, fifth early, veered out to avoid the fallen rider, then outfinished 14-1 Spanish Flower for the 3/4 length win in 1:35.89. It was a neck back to Appreciating third. A stewards' inquiry into the stretch run did not change the order of finish. Maragh was taken off the course by ambulance. 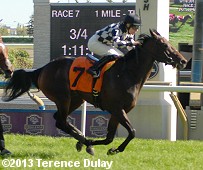 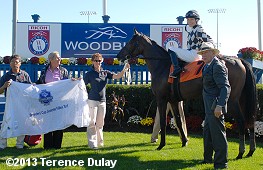 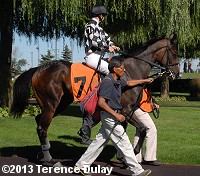 Left: Llanarmon in the winner's circle. Jockey Emma-Jayne Wilson said, "I was really happy with my position. When I called on her, despite the activity, she was really strong. She stalled, had a look at everything, regained her focus and finished up."

Right: Llanarmon in the paddock before the race. 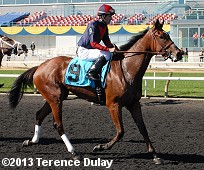 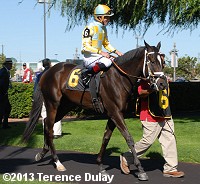 Left: Second place finisher Spanish Flower returns after the race. The 14-1 shot stalked the pace in third under jockey Steven Bahen, then rallied to get second beaten just 3/4 length. The Mark Frostad trainee improved her record to 2 seconds in 2 starts, earning $49,450 for owner-breeder Robert Evans.

Right: Third place finisher Appreciating in the post parade. The 5-2 second choice was 7th about 5 lengths off the pace under jockey Gary Boulanger, then rallied to get third but a neck short of second. The Mark Casse trainee improved his record to 1 win and 1 third in 2 starts, earning $53,140 for owner-breeder John Oxley. 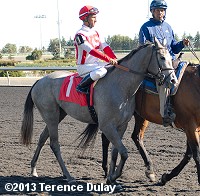 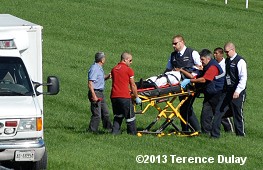 Left: Beaten favorite Ready to Act in the post parade. The 8-5 favorite pressed the pace under jockey Rajiv Maragh, gained a 2 length lead at the 1/8 pole but bolted to the left, striking the rail and unseating Maragh. She galloped out the distance uninjured. The Chad Brown trainee has a record of 1 win, 0 seconds, and 0 thirds in 2 starts, earning $48,386 for owners Klaravich Stables and William Lawrence.

Right: Rajiv Maragh is put in the ambulance 20 minutes after the race. Early reports say Maragh never lost consciousness, was able to move his arms and legs, and appears to have escaped serious injury. He was taken to hospital with a possible injured rib.