The $100,000 Stuyvesant Handicap (G3) on Saturday is the highlight race of the weekend at Aqueduct Race Track in New York. After 2 scratched out, just 6 older horses went to post in this 1 1/8 mile trip over the main track, with Solar Flare sent off as the lukewarm 2-1 choice exiting an allowance win at the Meadowlands after finishing third in the Delaware Owners' Day Handicap at Delaware Park. In to challenge the Larry Jones trainee included 7-2 second choice Stud Muffin, winner of the Empire Classic for New York breds last time out, and 4-1 third choice Dry Martini, fifth in the Knickerbocker Handicap last out and winless since the Cornhusker Handicap at Prairie Meadows in June 2007. Steady rain fell all day rendering the track muddy with temperatures in the low 60's, with just 3,013 paying customers on hand.

9-2 fourth choice Temporary Saint was quickest away and was sent to the lead immediately by jockey Eddie Castro, setting early fractions of 24.16 and 47.73 while being stalked by 7-1 Brilliant Son around the clubhouse turn. Entering the far turn, Brilliant Son faded from contention allowing Temporary Saint to open up a 1 1/2 length advantage over 5-1 Ravel after 3/4 in 1:11.42. Temporary Saint led the field into the stretch, however Dry Martini, who was outrun for the first 6 furlongs, came out 4 wide for the drive. He swept past the rest of the field to take over at the 1/8 pole after 1 mile in 1:37.33, and drew off late to win by 3 1/4 lengths over late-running Stud Muffin in 1:51.18 over the muddy, sealed track. It was another 3 3/4 lengths back to pacesetter Temporary Saint third, completing a trifecta of grey horses. Favorite Solar Flare tracked the pace in fourth early but showed no rally late, fading in the stretch to finish last beaten 18 1/4 lengths. 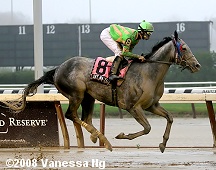 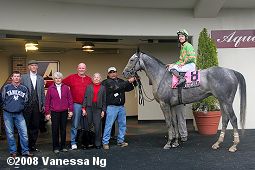 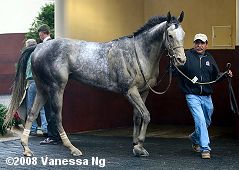 Left: Dry Martini in the winner's circle with trainer Billy Turner second from the left.

Right: Dry Martini heads back to the barn after the race. Winning trainer Billy Turner said, "I'm very pleased. This horse has been coming along steadily. The last race on the grass (Knickerbocker Handicap), well, he just got a little too far out of it. The race set up just as we had hoped. He had to make up ground, quite a bit of ground, but the jockey was easing up on him at the wire." 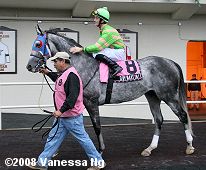 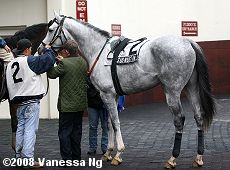 Left: Dry Martini heads out of the paddock before the race. Winning jockey Channing Hill said, "The race set up perfect for us. The horse really showed up today. I have to give credit to Mr. Turner and the owners. He was a little unlucky lately; he was second to that good Godolphin horse (Formal Decree, in the Strawberry Burrah Stakes). He really ran his race today."

Right: Second place finisher Stud Muffin gets saddled before the race. The 7-2 second choice raced in fifth for the first 3/4 mile about 6 lengths off the pace under jockey Alan Garcia, then unleashed a four-wide sweep into the stretch to get into contention late, but was no match for the winner, cruising under the line second beaten 3 1/4 lengths. The David Duggan trainee improved his record to 6 wins, 4 seconds, and 4 thirds in 25 starts, earning $400,356 for owners Louis Zito, John Crean, and James Romanelli. Earlier in the week Duggan said, "In the Empire Classic, he got it all together. At the 1/4 pole, he was sitting just off the lead and then split horses. He was a different horse. It may be that he is a cold weather horse, or simply that he has gotten stronger over the last 6 months." 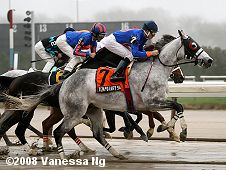 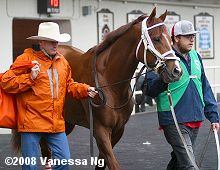 Left: Third place finisher Temporary Saint goes right to the front after the break. The 9-2 fourth choice broke sharply and led the field for the first 3/4 mile under jockey Eddie Castro but tired in the stretch, finishing third beaten 7 lengths. The David Jacobson trainee improved his record to 8 wins, 5 seconds, and 7 thirds in 30 starts, earning $372,309 for owner Drawing Away Stable.

Right: Last place finisher and beaten favorite Solar Flare is led into the paddock by trainer Larry Jones. The 2-1 favorite stalked the pace in fourth just 2 lengths off the lead for the first 3/4 mile under new jockey Norberto Arroyo Jr., but tired badly at the top of the stretch to finish last beaten 18 1/4 lengths. His record is currently 5 wins, 4 seconds, and 1 third in 13 starts, earning $187,872 for owner Fox Hill Farm. Earlier in the week Jones said, "He had sprained an ankle at Saratoga and we might have run back a little too soon at Delaware. He re-aggravated his ankle in the slop, so we decided to give him a little break and let him get over that. He's been training very well and that race at The Meadowlands was just the right prep we were looking for this race. It wasn't too taxing and he should be tight enough for this race."