The feature race on Saturday at Woodbine was the $150,000 Star Shoot Stakes for 3-year-old fillies sprinting 6 furlongs on the Polytrack, a race used by Biofuel one year ago to kick off her Horse of the Year campaign. A field of 6 went to post on a sunny afternoon in Toronto with temperatures in the mid 50's, with Nina Fever sent off as the 4-5 favorite off an allowance win over the Gulfstream turf. In to challenge her included 5-2 second choice Third Chance, fourth in the Suncoast Stakes at Tampa last out, and 6-1 third choice Caribbean Lady, off her win in a Gulfstream allowance.

Nina Fever battled for the lead with Third Chance exiting the chute through an opening quarter of 22.44, and the pair was joined by Caribbean Lady on the far turn through a half in 44.96. Entering the stretch, Nina Fever shook off her stalkers, opening up a 1 1/2 length lead at the 1/8 pole through 5 furlongs in 57.14, but 11-1 Portside, last at the 1/4 pole, came out five wide to pass tiring horses and closed with a rush to pass Nina Fever in the final strides to win by a neck in 1:10.09. It was another 1 1/4 lengths back to 10-1 Miss Inclined third. 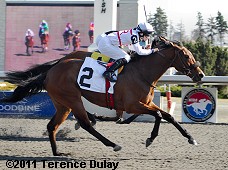 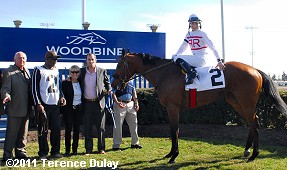 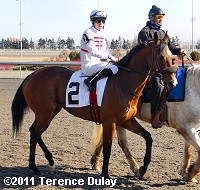 Left: Portside in the winner's circle. Winnning jockey Emma-Jayne Wilson said, "She tried to outbreak the gate, and settled just as they sprung it. She settled into stride nicely, and I was happy where we were the first portion. I started asking her to pick it up at the 3/8 pole. We weren't closing into them too much, so I got a little worried. I thought we'd have to do some running, because Wesley Ward's horses are sharp and fit. She was true to her form, and punched on down the lane just fine."

Right: Portside in the post parade. The 11-1 fifth choice broke in air, settled last 4 lengths off the pace early, then rallied late to get the win. The Barbara Minshall trainee improved her record to 2 wins, 2 seconds, and 1 third in 7 starts, earning $145,730 for owner Warren E. Byrne. 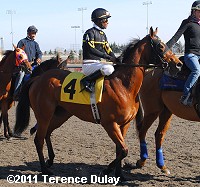 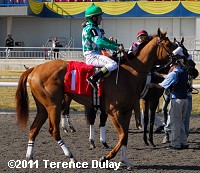 Left: Second place finisher and beaten favorite Nina Fever in the post parade. The 4-5 favorite set the pace under new jockey Patrick Husbands, took command into the stretch but failed to hold off the winner. She improved her record to 6 wins, 2 seconds, and 1 third in 12 starts, earning $205,049 for owner-trainer Wesley Ward and co-owner Gatewood Bell.

Right: Third place finisher Miss Inclined returns after the race. The 10-1 fifth choice stalked the pace in fifth just 2 lengths behind under new jockey Eurico Rosa da Silva, came out four wide for room but was blocked at the 3/16 pole, but got clear to get third beaten 1 1/2 lengths. The Malcolm Pierce trainee improved her record to 2 wins, 0 seconds, and 1 third in 6 starts, earning $66,360 for owner-breeder Mueller Thoroughbred Stable, Ltd. 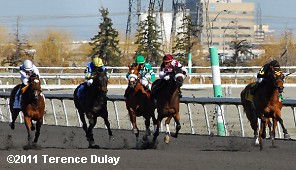