The feature race on opening weekend of the L.A. County Fair Meet at Los Alamitos Race Course is the $300,000 Starlet Stakes (G1) for 2-year-old fillies going 1 1/16 miles, and is a points-scoring race in the Road to the Kentucky Oaks. Conditions were typical for Orange County in early December, with sunny skies and temnperatures in the high 60's. Del Mar Debutante (G1) and Chandelier Stakes (G1) winner Princess Noor was sent off as the 3-5 favorite in the field of 5 off her disappointing 5th in the Breeders' Cup Juvenile Fillies (G1). In to challenge her included 6-5 second choice Astute, undefeated in her 2 starts including the Desi Arnaz Stakes at Del Mar, and 11-1 third choice Kalypso, winner of the Anaokia at Santa Anita last out.

Jockey Abel Cedillo sent Kalypso to the lead first time by through fractions of 22.91 and 46.43 while pressed by Princess Noor and stalked by Astute. On the far turn Princess Noor gained the lead but after a bad step at the 1/4 pole, was safely pulled up by jockey Victor Espinoza. Kalypso re-inherited the lead, opening up by 2 1/2 lengths through 1 mile in 1:37.51 but 18-1 Varda, last early under Drayden Van Dyke, rallied 4 wide to win going away by 1 1/2 lengths in 1:44.53, completing the exacta for trainer Bob Baffert. It was a long 4 lengths back to 25-1 longest shot Nasreddine third, and 8 more to Astute fourth. Princess Noor walked into the van under her own power and was taken back to the barn. Left: Varda in the winner's circle. Winning trainer Bob Baffert said, "(Varda) had been working really well and she looked like the kind of filly that the farther the better with her, so that's why we've been waiting and waiting with her. I'm so upset (about Princess Noor) it's hard to focus."

Right: Varda enters the paddock before the race. 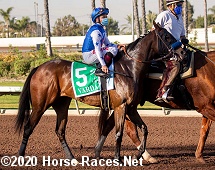 Left: Varda in the post parade. Winning jockey Drayden Van Dyke said, "She always tries hard. She broke well and we just waited. She needed every bit of that long stretch." Los Alamitos' Thoroughbred oval has the longest dirt stretch in North America at 1,380 feet, 34 feet longer than the Fair Grounds.

Right: Varda returns after the race. This is the fourth year in a row Bob Baffert and Drayden Van Dyke teamed up to win the Starlet. Left: Second place finisher Kalypso enters the paddock before the race. Trainer Bob Baffert said, "(Kalypso) ran a good race. She was out there, going pretty fast." She improved her record to 1 win, 2 seconds, and 1 third in 4 starts, earning $125,600 for owners Rockingham Ranch and David Bernsen.

Right: Third place finisher Nasreddine in the paddock. The Mike McCarthy trainee improved her record to 1 win, 1 second, and 1 third in 3 starts, earning $82,700 for owners Andrew and Rania Warren. Left: Beaten favorite (pulled up) Princess Noor heads out to the track. Trainer Bob Baffert said, "(Espinoza) said he pulled her up right away. He said it didn't look real bad. It was her left front. I can't believe it. She was running so easy." X-rays revealed no fractures. Baffert added, "She looks comfortable now. When she got back to the barn, she looked better. Her X-rays were clean, so that's good. It looks like she might have hit herself above the ankle; there's a tendon area that looks like some swelling there. We're just going to monitor her for a few days, see if she did any damage there. We'll scan it and do an ultrasound. She was walking well when she got off the trailer, so that's very comforting. It was scary, but it's not life-threatening or anything."

Right: The fillies break from the gate for the Starlet Stakes, with Princess Noor breaking from post 3 in what would be her final career start. On Sunday, owner Amir Zedan announced, "Princess Noor has been retired from racing after a soft tissue injury in the Starlet. She's a star -- she had the race and probably more Grade 1's to her name. Our focus is to get her healthy and be the best mom she can be. It hurts, but we pray to God she's well and retirement is the best decision." She retires with a record of 3 wins, 0 seconds, and 0 thirds in 5 starts, earning $363,500.