The highlight race of the Turfway Park winter-spring meeting is the $550,000 Horseshoe Casino Cincinnati Spiral Stakes (G3), contested at 1 1/8 miles on the Polytrack. Conditions were excellent for this key Triple Crown prep worth 50 "Road to the Kentucky Derby" points to the winner, run just 6 weeks before the Kentucky Derby, with cloudy skies and temperatures in the mid 50's. A full field of 12 three-year-olds went to post on Saturday afternoon, with My Name Is Michael sent off as the 3-1 favorite, exiting a third place finish in the Sam F. Davis (G3) at Tampa Bay Downs. In to challenge him included 7-2 second choice Uncaptured, off wins in the Iroquois (G3) and Kentucky Jockey Club (G2) both at Churchill Downs, and 4-1 third choice Balance the Books, unraced since third in the Breeders' Cup Juvenile Turf (G1).

Jockey Norberto Arroyo sent 6-1 fourth choice Mac the Man to the early lead and he set fractions of 23.74 and 48.30 while pressed by 23-1 Giant Finish and 22-1 Taken by the Storm. Down the backstretch, Mac the Man tired badly and was evetually eased, as Taken by the Storm gained the lead through 3/4 in 1:13.00. At the 3/16 pole, 15-1 Black Onyx, sixth early, came out 5 wide for room and passed the pacesetters, drawing off to win by 1 1/2 lengths over late-running Uncaptured in 1:51.98. It was another length back to Giant Finish third, while favorite My Name Is Michael checked in 8th. 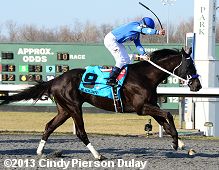 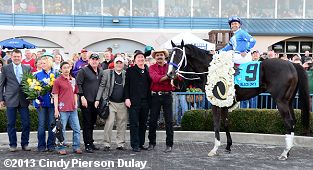 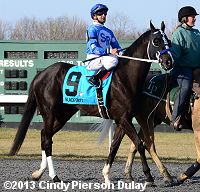 Left: Black Onyx in the winner's circle. Winning trainer Kelly Breen said, "He's proven he's a multi-talented horse. He's won on dirt, on turf, and now on Polytrack. The plan was—if he won—that we wouldn't run again until the Derby. His next start will be the Derby." Breen said that Black Onyx will be late-nominated to the Triple Crown.

Right: Black Onyx in the post parade. Jockey Joe Bravo said, "The gates opened and he was sluggish. I was saying, 'Don't tell me he's not taking the track.' After 1/8 mile he took hold of the bit and started pulling me along. I was watching Miguel Mena (aboard Uncaptured), because I respect that horse, but it didn't look like that horse was handling as well as mine. After that, my horse settled down and it was all over. I've known the owners for 7 or 8 years. We used to play poker together. We hang out a few nights a week and go to Heat games together." 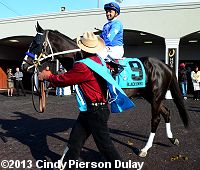 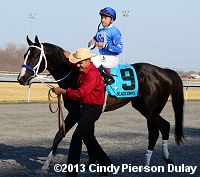 Left: Black Onyx in the paddock before the race. Assistant Jim Reed added, "Kelly sure had him ready to run. Despite his odds on the Tote board, I liked the way the race set up. There was going to be a little more speed in front of us and we could finish at the end. I sure don't have any ideas on future plans. Kelly will have to take care of that. But I'm sure that they're looking to go to Churchill—somehow, some way."

Right: Black Onyx parades after winning. Trainer Kelly Breen confirmed that Joe Bravo would retain the mount for the Derby. 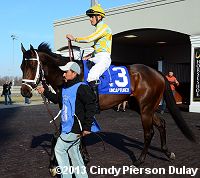 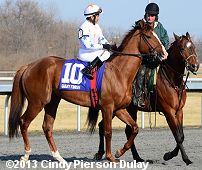 Left: Second place finisher Uncaptured in the paddock. Trainer Mark Casse said, "It's been a really long road getting there. For him to run farther than he ever has in his first start in 4 months, he performed very well. If all goes well, we'll go from here to the Blue Grass Stakes, and then into the Derby. You never know (about getting the distance). But we do know one thing: he's two-for-two at Churchill Downs. And judging by the way he ran and by the way he rated, I don't see how distance would be an issue."

Right: Third place finisher Giant Finish in the post parade. Jockey Jose Espinoza said, "He took a very good position and he kept dragging me all the way around. When I asked him to go, I thought he'd have a lot of kick in the end, but he just kept on with a steady run. He's pretty much a professional horse. He has a lot of class." 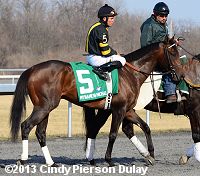 Left: Beaten favorite and 8th place finisher My Name Is Michael in the post parade. Jockey Joel Rosario said, "He was taking a little time to get going in the first turn. Past the turn he was fine after that, but when we went into the second turn it took him a lot of time to really get into the race. I was working to hold him together and keep him going, but it was probably not his day."

Right: The entire field shortly after the start. 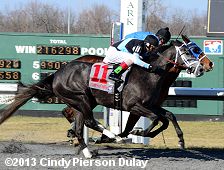 The distaff counterpart to the Spiral is the $100,000 Fathead Bourbonette Oaks (G3) for 3-year-old fillies going 1 mile on the Polytrack, with the winner earning 50 points in the Road to the Kentucky Oaks. Hollywood Starlet (G1) winner Pure Fun was sent off as the 4-5 favorite in the field of 12 over 8-1 second choice Awesome Mama, undefeated in 2 starts and making her stakes debut, and 9-1 third choice Silsita, off a third place finish on the Gulfstream turf.

Jockey Joe Bravo sent 20-1 Martha's Moon to the early lead through fractions of 24.09 and 47.56 while stalked by Silsita and 31-1 Marathon Lady. At the top of the lane, Martha's Moon tired badly and was eased, allowing Marathon Lady to inherit the lead through 3/4 in 1:12.08. Silsita moved up alongside Marathon Lady through 7/8 in 1:24.83 setting up a duel in the final furlong. The pair hit the line together, with Silsita on the outside prevailing by a nose in 1:38.27. It was a long 3 lengths back from Marathon Lady to favorite Pure Fun third. 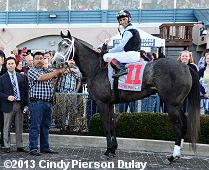 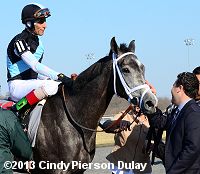 Left: Silsita in the winner's circle. Ginny DePasquale, assistant to Todd Pletcher said, "It's very exciting to see this filly jump up and win like this. She seems to be a turf filly and some horses seem to take to the Poly. It seemed like a good spot and Todd felt that she was improving over a period of time in Florida. So we thought we'd take a shot and obviously it worked out quite well. I'm sure the Kentucky Oaks is up to Todd and the owners."

Right: Silsita returns after the race. Jockey John Velazquez said, "Pretty easy trip, we broke well and we wanted to be where we were following somebody and it was perfect. I was trying to get her to slow down the first part of the race and she did that nicely. She's showed improvement each time I've ridden her." 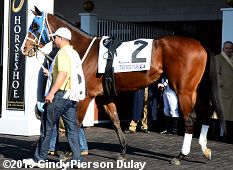 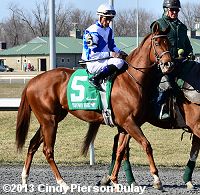 Left: Second place finisher Marathon Lady in the paddock. Trainer Steve Hobby said, "She ran great. We'll more than likely head back to Hot Springs and make plans from there. I knew she was going to run a nice race and I was very happy that she was sitting where she was in the race. Robby did a great job with her. The head bob wasn't ours, but that's racing."

Right: Third place finisher and beaten favorite Pure Fun in the post parade. Trainer Ken McPeek said, "It was her first start of the year. It looked like she was fighting the track a little the last 1/4 mile. It was a little loose and cuppy out there and Garrett said she was fighting it. We thought she had a chance to get beat today, but she's a good filly and it's a step in the right direction." 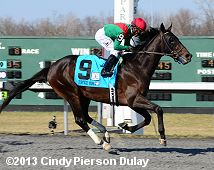 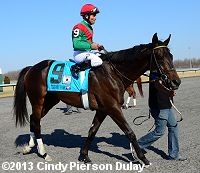 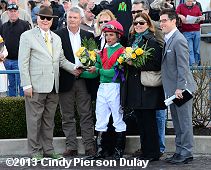 Winning jockey Joel Rosario said, "He proved today that he can run, but I was kind of worried when we passed the 3/8 pole. But he was catching horses so quickly, he got the job done today. I was concerned coming around the far turn because it took a while for him to get going. When we started running, he just went. At the top of the stretch, he was moving a lot better than (Divine Ambition). After that, I just let him get it together."

Winning owner and race sponsor Barry Irwin of Team Valor (far left) added, "It's pretty weird! I didn't even realize I was (presenting the trophy to myself), but I guess I was. It's the first time I ever sponsored a race, and it was fun. I think we'll do it again. When he's in motion, he's as good as Animal Kingdom. But he's so immature and so klutzy away from the gate that he gives up 5, 7, 8 lengths at the start. He's not going to make the Derby, but I think he's an exciting prospect for a race like the Belmont." 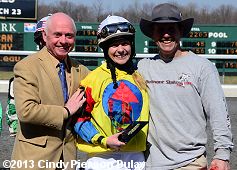 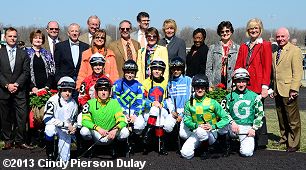 The 5th race, a 6 furlong sprint for $5000 claimers, was the inaugural "Catch a Riding Star" competition between graduates of the North American Riding Academy and similar riding schools in the rest of the world. American jockey Mallory Strandberg, who only won her first race on Friday at Laurel Park, won aboard 8-5 second choice St. Armands. French jockey Mathieu Adam, captain of the World team, was second aboard 5-1 Simon Ridge, while American team captain Ben Creed aboard 11-10 favorite Ful Da Funk was third.
Results Chart

Right: All the jockeys pose in the paddock before the race.