The $500,000 Vinery Racing Spiral Stakes (G3) at Turfway Park, formerly known as the Lane's End Stakes, is a major prep for the Kentucky Derby, run just 6 weeks before the Run for the Roses. Despite a sunny start of the card, the stakes races were run under overcast skies with temperatures in the mid 30's with 22 mph wind gusts. A field of 11 three-year-olds contested this 1 1/8 mile Polytrack test, with Positive Response was sent off as the 8-5 favorite after winning the John Battaglia Memorial, the major local prep for this race. In to challenge him included 3-1 second choice Animal Kingdom, making his stakes debut after finishing a close second in allowance company, and 6-1 third choice Decisive Moment, fifth in the Risen Star (G2) after winning the Jean Lafitte.

Positive Response went to the early lead and was pressed by 82-1 Son of Posse and Decisive Moment through fractions of 22.57 and 46.56. On the turn, Decisive Moment moved up to challenge, taking over the lead at the 3/8 pole through 3/4 in 1:12.57. Animal Kingdom, who settled in midpack saving ground early, came out 5 wide for the drive and rallied to pass Decisive Moment inside the 1/8 pole to win going away by 2 3/4 lengths in 1:52.32. It was another 3 1/4 lengths back to 15-1 Twinspired third, while favorite Positive Response tired badly late to finish 8th.

Also on the card was Bourbonette Oaks, a Kentucky Oaks preps for the 3-year-old fillies, and the Queen Stakes for distaff sprinters. 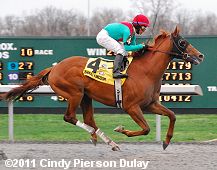 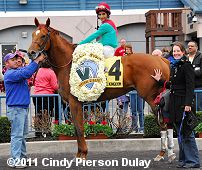 Left: Animal Kingdom in the winner's circle and the trophy presentation. His trainer Graham Motion said, "We knew there would be an honest pace. I just told Alan to ride his race. We've kind of been pointing for this race for a while. I won't be in a hurry to run him back in the Blue Grass off of this today. We haven't had him on the dirt but (the Kentucky Derby is) something (owner) Barry (Irwin of Team Valor) and I will talk about. I don't think distance is a problem. Now he's got the earnings. We know he's an impressive animal." 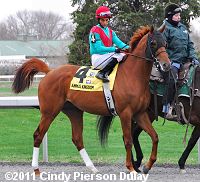 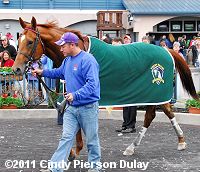 Left: Animal Kingdom in the post parade. His jockey Alan Garcia said, "My horse didn't break that well and I had a little bit of trouble around the first turn. So I decided to be patient and save ground. My horse responded very well today. I stayed on the rail because I had a feeling everybody would try to go wide. I figured that if he was good enough, he would make a move and he did. I'm very excited. The long distances will be good for him. Wherever they want to go with this horse, I want to be there."

Right: Animal Kingdom heads back to the barn in his new winner's blanket. 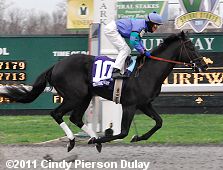 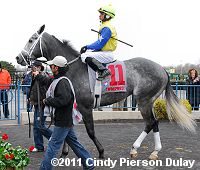 Left: Second place finisher Decisive Moment crosses the finish line. His jockey Kerwin Clark said, "I had a really good trip. The horse was a tad confused running on the Polytrack but he did lay off the pace so easy with his ears straight up. He's getting better every time I ride him. Usually he doesn't let a horse get by him but that was a good horse that beat us today."

Right: Third place finisher Twinspired in the paddock before the race. His jockey Victor Lebron said, "We had a little bit of a rough trip at the beginning. We kind of got a little squeezed in around the turn. After that I kind of had to manage my way and steer him along and he came running at the end. The distance wasn't an issue. He came running at the end and was giving me all he had and every step he took was a gaining step. If we had a different trip at the beginning, he would've at least gotten second. He gave everything, no excuses about the race." 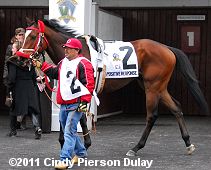 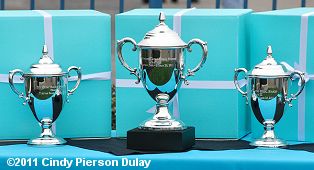 Left: Eighth place finish and beaten favorite Positive Response in the paddock before the race. His trainer Billy Morey said, "We're very disappointed. When I saw the pace I was beyond concerned. They went 21 and change for the second quarter and when they hung that up I knew we were in trouble. We're going home to regroup."

Right: The trophies for the Vinery Spiral Stakes.

The start of the Vinery Spiral Stakes. 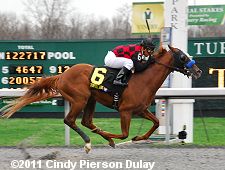 Three-year-olds nominated for the Vinery Racing Spiral looking for an easier spot ran in the 1 1/16 mile, $100,000 Rushaway Stakes on the undercard just before the feature. Crimson China, winne of a maiden in England and an allowance at Gulfstream, was sent off as the 6-5 choice over 4-1 Swift Warrior and 5-1 The Ole Gen. Swift Warrior battled for the lead with 28-1 St. Ivan through fractions of 24.52 and 48.92. St. Ivan tired badly as Swift Warrior opened a 4 length lead at the 1/8 pole, and easily held off late-running Crimson China by 2 lengths in 1:45.73. It was another 3 1/4 lengths back to The Ole Gen third.
Results Chart 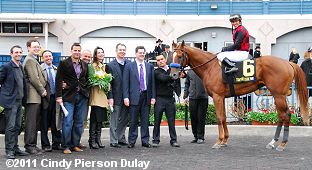 Swift Warrior in the winner's circle. Winning trainer John Terranova said, "We originally were pointing for the Spiral but we wanted to take a more conservative route. He's nice and fresh. We wanted to see how he liked the synthetic surface, so we may go to the Blue Grass. He's nominated for it. This race will set him up nicely for that. It's anybody's guess if a horse is going to take to synthetics."

His jockey Javier Castellano said, "We had a beautiful trip. John told me, 'Put him on the lead and improve your position,' and that's exactly what he did. He had been training so good at Palm Meadows. I worked him one time and really liked the horse. It's unbelievable. He was in the lead, just galloped along. It was beautiful. The thing I liked best is when I asked him he responded and took off again." 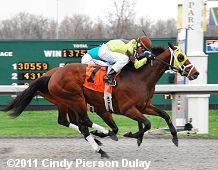 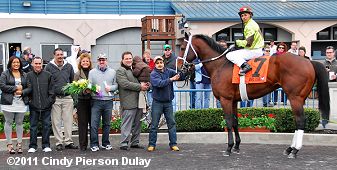 Ghost Is Clear in the winner's circle. His jockey Victor Lebron said, "We had a good break. Mike (Maker) told me before the race, 'Wherever he breaks, just sit and relax with him, and swing him out down the lane.' I did exactly what he told me. The horse showed up. When I called on him, he exploded. He came through." Trainer Mike Maker added, "I was happy to see those two horses going hard at it on the front end. We had a good post and Victor gave him a great ride."

On to the Bourbonette Oaks and the Queen Stakes