The juvenile division was highlighted at Saratoga on Sunday afternoon, on a clear day at the historic oval with temperatures in the mid 70's. The official attendance was 46,330, which was inflated due to turnstile spinners taking advantage of the Fourstardave bobblehead promotion. The $200,000 Saratoga Special (G2) featured a field of seven 2-year-old males sprinting 6 1/2 furlongs on the main track. Candy Dandy, winner of his debut at Churchill by 5 lengths on June 30, was sent off as the even-money choice over 7-2 Wired Bryan, winner of his first two starts, his debut at Belmont and then the Sanford (G2) on Saratoga opening weekend. 11-2 Lunarwarfare was the third choice on the board, off his debut win at Gulfstream on July 14.

Jockey John Velazquez sent 6-1 fourth choice Corfu to the lead down the backstretch and he set quick fractions of 21.62 and 44.02 while stalked by Wired Bryan a length behind, in turn 2 lengths ahead of Candy Dandy third. Entering the stretch, Corfu continued to lead as Candy Dandy began to tire. Wired Bryan closed the gap setting up a duel to the line, the pair rubbing saddles at the 1/16 pole, but Corfu held him off for the hard fought gate-to-wire win in 1:15.57 over the fast track. It was just 1/2 a length back to 14-1 Danza third. 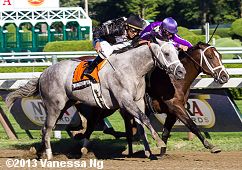 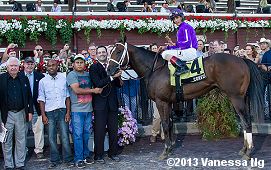 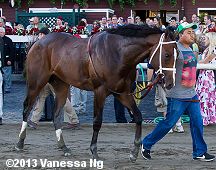 Left: Corfu in the winner's circle. Winning trainer Todd Pletcher said, "We've liked him all along since we purchased him at Barretts. We felt like he was a very fast horse there, and we felt like he was a precocious 2-year-old. We're happy to get him started here and happy to have him win first time out. We were monitoring pretty closely how he bounced out of his maiden race and just wanted to decide whether we could turn him back on fairly short rest. He came back with a very good breeze, and I felt like that was the answer we were looking for. Luckily, he showed up today and had enough to hold on in a pretty fast race."

Right: Corfu heads back to the barn after the race. 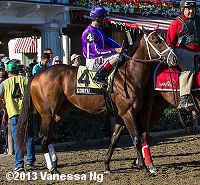 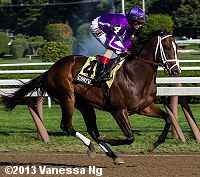 Left: Corfu heads out for the post parade. Jockey John Velazquez said, "For having just one race and to come back to perform the way he did today, I am proud. He held on after going as fast as they were going all the way around. You've got to take your hat off to him when the horse keeps running like that. We knew he is fast. That's the way he won the first time out. We were hoping to get a little bit of a break, but we didn't. We were rolling all the way around with the other horse next to me." 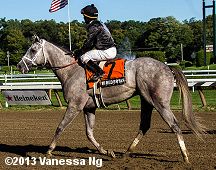 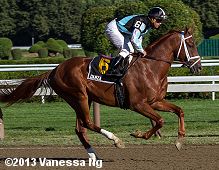 Left: Second place finisher Wired Bryan returns after the race. Trainer Mike Dilger said, "I am very, very proud of our horse. He ran a great race. I was disappointed not to win. That was the closest thing to a dead heat that I've ever seen. We are very happy with him. Despite the quick turnaround he was doing very well." Dilger worked for Pletcher for 7 years before going out on his own in January.

Right: Third place finisher Danza in the post parade. The 14-1 shot raced fifth 5 lengths off the pace under jockey Javier Castellano, then rallied to get third beaten just 1/2 a length. The Todd Pletcher trainee improved his record to 1 win and 1 third in 2 starts, earning $62,000 for owner Eclipse Thoroughbred Partners. Pletcher said both Corfu and Danza will start next in the Hopeful (G1) on Sept. 2. 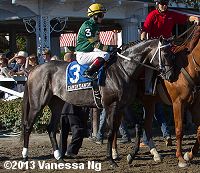 Fifth place finisher and beaten favorite Candy Dandy heads out for the post parade. The even-money choice stalked the pace in third under jockey Rosie Napravnik but tired in the stretch to finish fifth beaten 9 3/4 lengths. The Steve Asmussen trainee has a record of 1 win, 0 seconds, and 0 thirds in 2 starts, earning $33,000 for owners Cathy and Bob Zollars.


Immediately before the Saratoga Special, a field of six 2-year-old fillies contested the $200,000 Adirondack Stakes (G2) also at 6 1/2 furlongs. Fiftyshadesofgold, winner of her debut at Lone Star in May followed by the Debutante at Churchill, was sent off as the 3-10 favorite over 4-1 Who's in Town, a debut winner at Delaware, and 10-1 Thank You Marylou, a debut winner on the Colonial Downs turf.

Who's in Town battled for the lead with 13-1 Hop the Six through fractions of 21.79 and 44.57, while stalked by 16-1 Designer Legs. Entering the stretch, Fiftyshadesofgold, 4th early, moved up to challenge on the inside, gaining second at the 1/8 pole. Who's in Town drifted inward causing the favorite to check and lose momentum. Designer Legs rallied late but Who's in Town held her off by a neck in 1:16.42. It was another 1 3/4 lengths back to Thank You Marylou third, and neck back to favorite Fiftyshadesofgold fourth. However, the stewards disqualified Who's in Town for interference and placed her fourth behind the favorite, handing the victory to Designer Legs. The race was marred by the breakdown of 21-1 longest shot Charmed Hour who was euthanized on the track. 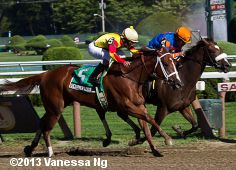 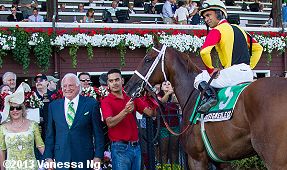 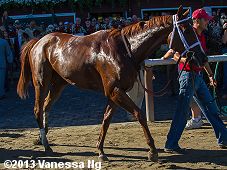 Left: Designer Legs in the winner's circle. Winning trainer Dallas Stewart said, "She ran a great race. She was game. She fought back with that horse, and fortunately, it came up the right way. I had her early, but Murray sent her to Minnesota because his father's up there. A lot of credit goes to (owner) Murray Valene and (previous trainer) Gary Scherer. They sent her in ready to run, and I just tried not to mess her up."

Right: Designer Legs heads back to the barn after the race. 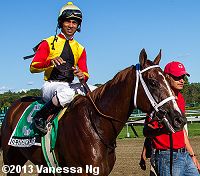 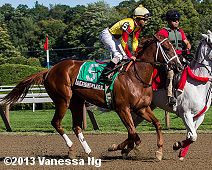 Left: Designer Legs returns after the race. Jockey Shaun Bridgmohan said, "Well, I thought I was sitting a good trip down the backside; turning for home, me and Rosario (aboard Who's in Town) were kind of fighting it out. He kind of bumped (Fiftyshadesofgold) a little bit and she hesitated just enough. His filly was game, but we got lucky and got put up." 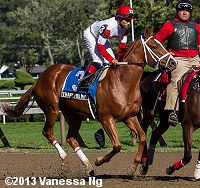 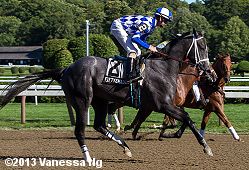 Left: Second place finisher Thank You Marylou in the post parade. The 10-1 third choice raced fifth under jockey Alan Garcia, then passed tired horses to get third but was moved up to second by the disqualification. The Mike Maker trainee improved her record to 1 win and 1 second in 2 starts, earning $83,200 for owners Ken and Sarah Ramsey.

Right: Third place finisher and beaten favorite Fiftyshadesofgold in the post parade. Trainer Bret Calhoun said, "It's very disappointing. It looked like we were coming through and going to win. Race riding is race riding, but I think (Joel Rosario aboard Who's In Town) overdid it today. He endangered a lot of riders and horses, and I hope he gets a long vacation to think about it. He's a great rider, but that was very uncalled for." 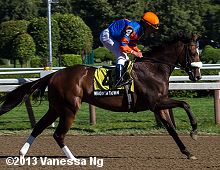 Disqualified winner Who's in Town who was placed fourth in the post parade. Trainer Michael Matz said, "What can I do? I was real pleased with the way my filly ran. She was game."