Ontario-sired juveniles were featured at Woodbine on the third Sunday of November. Conditions were typical for fall in Toronto, with dark overcast skies early in the card followed by light rain at sunset, and a high temperature of 8 C (46 F) with wind gusts of 40 km/h (25 MPH). The first of two stakes races was the $100,000 South Ocean Stakes for Ontario-sired 2-year-old fillies sprinting 6 1/2 furlongs on the all-weather Tapeta main track. Shady Well Stakes third place finisher Ya Mar was sent off as the 3-2 favorite in the field of 7. In to challenge her included 3-1 second choice Lois Len, a close third in the Victorian Queen but 9th last out in the Princess Elizabeth, and 7-2 third choice My Girl Sky, fourth in the Shady Well.

Jockey Luis Contreras sent 23-1 longest shot Loaded Vixen to the lead out of the chute through an opening quarter of 23.40 before Ya Mar took over on the turn through a half in 45.96. Turning for home, jockey Kazushi Kimura asked Ya Mar for run and she obliged, drawing away in the lane to win by 2 1/2 lengths over late-running Lois Len in 1:17.16. It was another length back to 19-2 Swinging Mandy third. 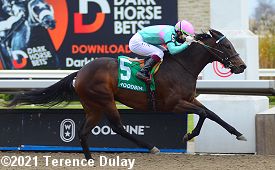 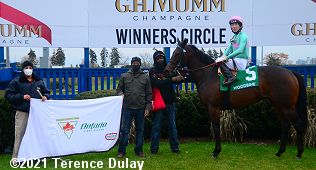 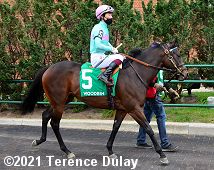 Right: Ya Mar heads out to the track before the race. Kimura added, "She knew when it was time to go." Asked about being the leading rider of the meet with two weeks remaining, he added, "I appreciate the trainers and the owners, but also the grooms and exercise riders who take care of the horses. I can't do this job without the horses." 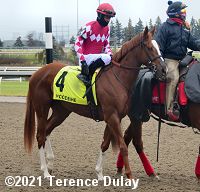 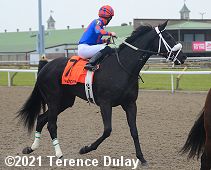 
Three hours after the South Ocean, the $100,000 Frost King Stakes featured Ontario-sired 2-year-old males also sprinting 6 1/2 furlongs. Gatling Gun was sent off as the 2-1 favorite in the field of 7 off his maiden win at second asking on October 24. In to challenge him included two horses at identical odds of 3-1, Silent Runner, second in both the Ontario Racing and Clarendon Stakes, and Where's Neal, winner of the Bull Page but 11th in the Cup and Saucer last out.

Jockey Kazushi Kimura sent Where's Neal to the lead out of the chute and around the turn through fractions of 23.47 and 46.50 while pressed by 10-1 J M R Best of Turf and 20-1 longest shot Lucys Child. In the stretch Where's Neal tired as Silent Runner, 4th early under David Moran, swept to the lead 2 wide through 3/4 in 1:10.45. Kept to task by Moran, Silent Runner held off late-closing 9-1 Sir for Sure to win by 3/4 length in 1:16.96. It was another 1/2 length back to favorite Gatling Gun third. 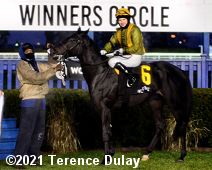 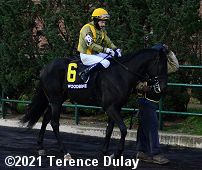 Left: Silent Runner in the winner's circle. Winning jockey David Moran said, "He's a lovely little horse. He's a real ATM machine. I was a little worried coming back so quick with him (a winning performance on November 12). So, he broke really fast and I was there to take him back and get him in behind the speed. He settled lovely and then as you saw, when I asked him, he ran right to the wire. He's a lovely little guy."

Right: Silent Runner heads out to the track before the race. Moran added, "Today I said I would try to get him to relax, save some energy for home, and that's what he did." 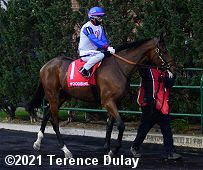 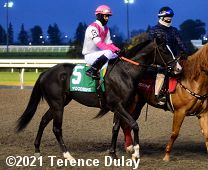 Left: Second place finisher Sir for Sure heads out to the track before the race. The Mark Casse trainee improved his record to 1 second in 1 start, earning $15,819 for owner Heste Sport Inc.

Right: Third place finisher and beaten favorite Gatling Gun in the post parade. He improved his record to 1 win and 2 thirds in 3 starts, earning $81,262 for owner-trainer and breeder Barbara Minshall.