The feature race on the second Sunday of the Saratoga meeting was the $200,000 Shuvee Stakes (G3), featuring a field of 6 older fillies and mares going 1 1/8 miles, one complete lap of the main track. Despite overnight rain, the track dried to fast midway through the card, under sunny skies and temperatures in the low 80's. Turnback the Alarm Handicap (G3) winner and Doubledogdare Stakes (G3) runner-up Royal Flag was sent off as the 8-5 favorite. In to challenge her included 9-4 second choice Dunbar Road, 5th in the La Troienne (G1) after finishing third in the Breeders' Cup Distaff (G1), and 4-1 third choice Crystal Ball, winner of the Lady Jacqueline Stakes at Thistledown.

Jockey Junior Alvarado sent 9-2 fourth choice Horologist to the lead first time by through fractions of 23.35, 47.01, and 1:11.13 while pressed by 18-1 longest shot Liberty M D and stalked by 11-1 Gold Spirit. Turning for home Horologist continued to lead through 1 mile in 1:36.39 but favorite Royal Flag, last for the first 3/4 mile under jockey Joel Rosario, drifted out 7 wide into the lane and rallied to win by 3/4 length in 1:49.42. It was a head back to Crystal Ball third. 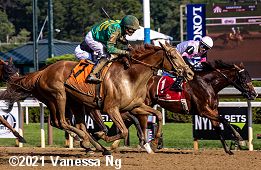 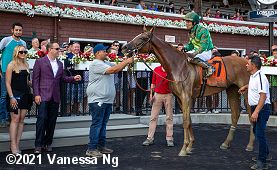 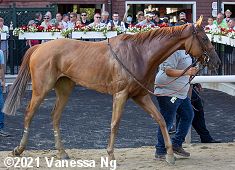 Left: Royal Flag in the winner's circle. Winning trainer Chad Brown said, "I was a little surprised but Joel [Rosario] knows her really well now. I thought her last race at Keeneland a few months ago was a good race for her. I wasn't sure what the pace was going to [dictate], so I told him to put her wherever she was comfortable and I saw her back there. The pace was solid enough and he times it just right. It was a beautiful ride. She was able to get up in time. She was quite far back turning for home. I was very proud of her effort. She showed that she has a lot of heart. She might not have run a lot of times in her career, but every time she shows up."

Right: Royal Flag heads back to the barn after the race. Her next start will likely be in the Personal Ensign (G1) on August 28. Brown added, "I don't know if she likes time in between races or something always happens that requires us to give her time. This is her last season racing so hopefully we can give her a more consistent campaign now and get a few starts into her before she's retired." 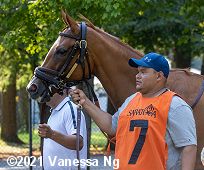 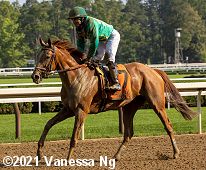 Left: Royal Flag in the paddock before the race.

Right: Royal Flag returns after the race. Winning jockey Joel Rosario said, "She was there for me. It looked like a good pace in front. I was waiting to come out turning for home and she did it very well. The pace was good and the way she was going, I was just hoping to have something in the end. She ran really hard last time and we just got beat at Keeneland [Doubledogdare]. I thought she ran really well again today. Chad told me that to stay out was probably the best. I was just following his other horse [Dunbar Road]. I just wanted to have a clean run when I started moving. When she started moving in the last turn and then with the stride that she has; I was not even asking for everything yet, so I felt she was going to run really big." 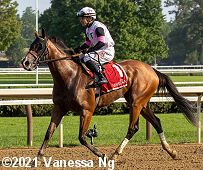 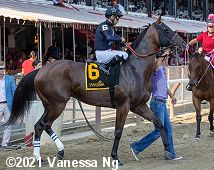 Left: Second place finisher Horologist returns after the race. Jockey Junior Alvarado said, "She has always been a good, game filly. We had been trying to track a little bit and make a run. It seems like she wasn't happy being stuck in between horses. Bill [Mott, trainer] said, 'send her out of there, take advantage of the break and by the three-quarter pole if you're on the lead fine, if someone else wants the lead just sit right off of them.' She hustled me out of there, I put her right there and she fought the whole mile-and-an-eighth to the wire." 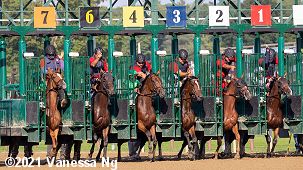 Left: The fillies break from the gate for the Shuvee Stakes with eventual 5th place finisher Dunbar Road out of post 4. Trainer Chad Brown said, "That was disappointing. On the final turn when she made that move, I really thought if you stopped the race there she was the probable winner at that point. It's concerning and we'll have to just examine her back at the barn and see where she is."

Right: Shortly after the start of the race with eventual 4th place finisher Gold Spirit (2) pressing pacesetter and eventual runner-up Horologist (1). Gold Spirit's trainer Chad Brown said, "I didn't think it would unfold quite the way it did. I thought with Gold Spirit right in the middle of it she would be forward based off the way she had been training, but I didn't think she would be three abreast on the track. I was surprised watching it unfold that closely down the backside. We're still learning about her. Javier [Castellano] said she broke so sharp that he didn't want to take anything away from her, which I'm fine with. For her still to be throwing rights and lefts at the sixteenth pole is encouraging. It wasn't the trip I wanted but its something we can work with moving forward. She ran bravely for fourth in her first start in the country."