The feature race at Del Mar on Sunday was the $100,000 Shared Belief Stakes for three-year-olds going one mile on the main track and marked the return to racing of Kentucky Derby (G1) winner Medina Spirit, who had been sidelined since finishing third in the Preakness (G1). Conditions were typical for late August in San Diego County, with cloudy skies and temperatures in the low 70's. As expected Medina Spirit was sent off as the 9-10 favorite in the short field of 6. In to challenge him included 8-5 second choice and Santa Anita Derby (G1) winner Rock Your World, 17th in the Kentucky Derby then 6th in the Belmont Stakes (G1), and 11-2 third choice Team Merchants, making his stakes debut off an allowance win. 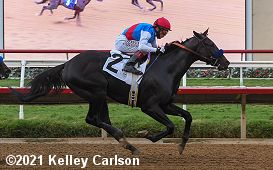 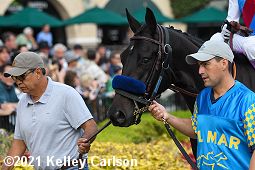 Left: Medina Spirit in the winner's circle. Winning trainer Bob Baffert said, "It's a relief. A Shared Belief relief. It's good that the fans were here for the showdown. I did not have any intention of running him in this race until a couple weeks ago. I started thinking about it, figuring it couldn't come up that tough. Then (son) Bode said, 'You know Rock Your World's running there?' For what this horse has gone through he's such a game horse and I wanted to run him here and see if he likes Del Mar. I've never had a Derby winner come back and win here so that's a first. He looks good and John said he feels better than ever. There's still some good racing for him out there. We're waiting for the process to happen."

Right: Medina Spirit in the paddock. Winning jockey John Velazquez said, "It went the way we wanted it. Once I made the lead into the first turn, I felt better. He was moving well. When he got on the backside, his ears went up and he was really cruising. When a horse would come to him, he'd pick it up on his own. When we got to the quarter pole, I said 'Let's go; time to pick it up.' And he was right into it. He finished strong and the gallop out was strong, too. He can build off this race." 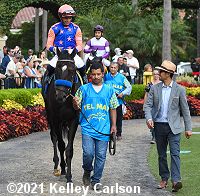 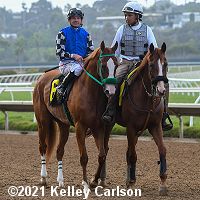 Left: Second place finisher Rock Your World in the paddock before the race. Jockey Umberto Rispoli said, "He ran well. He ran a huge race. He got beat by the winner of the Kentucky Derby. What are you going to do? I can't ask anything more of my horse."