The first of six stakes races on Arlington Million Saturday was the $400,000 Secretariat Stakes (G1) for 3-year-olds going the Million distance of 1 1/4 miles on the turf. A field of 6 went to post with Oscar Performance sent off as ths 3-2 favorite off wins in the Pennine Ridge (G3) at Belmont Derby Invitational (G1) at Belmont Park. In to challenge him included 2-1 second choice Permian, winner of the King Edward VII (G2) at Royal Ascot but 2nd in the Grand Prix de Paris (G1) at Saint-Cloud, and 3-1 third choice Afandem, second in the Prix Eugene Adam (G2) at Maisons-Laffitte.

Jockey Julien Leparoux sent 11-1 Sonic Boom to the front first time by and he set fractions of 24.77, 49.51, 1:13.83, and 1:38.03 over the firm going while pressed by Oscar Performance and stalked by Permian. Turning for home, Sonic Boom tired as Oscar Performance and jockey Jose Ortiz gained the lead at the 3/16 pole. 8-1 Taj Majal, 5th early, rallied 3 wide but Oscar Performance drew off to a 2 1/4 length win in 2:01.79. It was another 1 1/2 lengths back to Afandem third. Shortly after the finish Permian, who finished 6th beaten 11 3/4 lengths, broke down, unseating jockey William Buick and had to be euthanized on the course. 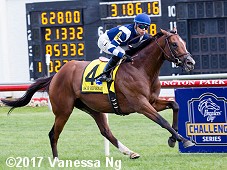 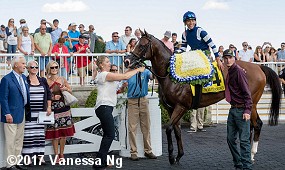 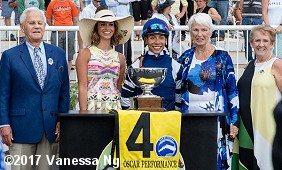 Left: Oscar Performance in the winner's circle. Winning owner John Amerman (far left) said, "You're never confident until the finish line but they were very good horses and so we're delighted Jose could ride so well and beat him. I said good luck [to Jose Ortiz] because he knows the horse and has ridden him ever since his first race."

Right: The trophy presentation for the Secretariat.. 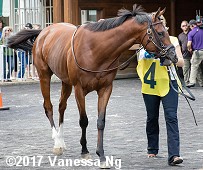 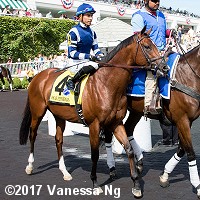 Left: Oscar Performance in the paddock before the race. Winning jockey Jose Ortiz said, "He was sitting very comfortably in second and when I asked him to go he ran very well. I love that Brian [Lynch] gave me the opportunity on this horse. I'm very happy I won the race for [owner John Amerman and Brian Lynch]"

Right: Oscar Performance heads out to the track before the race. 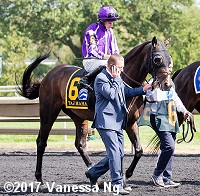 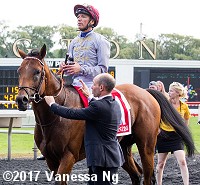 Right: Third place finisher Afandem returns after the race. Jockey Frankie Dettori said, "Everything went smooth like I thought. He's a young horse, and he hasn't encountered these kinds of bends. You have to race into them and race off them and he's not used to those kinds of things and lost all his momentum on the turns and that cost me." 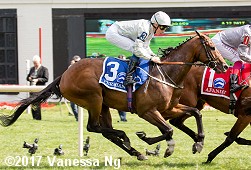 Last place finisher and 2-1 second choice Permian first time by. Permian broke down after the finish unseating jockey William Buick. Charlie Johnston, assistant to his father Mark said, "We've lost the horse. He suffered a catastrophic fracture of his left fore. I was with him on the track for 30 seconds. He was in the process of running a very disappointing race and I believe it was when he was winding down that it happened. I am with William (Buick) and he is conscious, but complaining of back pain." Buick was taken to Northwest Community Hospital, diagnosed with a fractured T-12 vertebrae in his lower back. 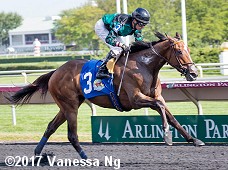 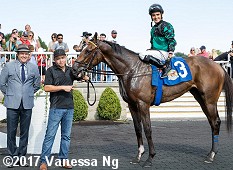 Winning trainer Grant Forster said, "It was a gamble to run here today, but he had run very well on the turf in New Orleans this winter. There's not a lot of spots for an up-and-coming 3-year-old right now, so this seemed like a good opportunity and we took a crack at it. We will look and see what our options are. Possibly the Smarty Jones at Parx on Labor Day weekend or the Oklahoma Derby in six weeks."

On to the Arlington Million won by Beach Patrol
On to the Beverly D. won by Dacita