The first of three Grade 1 stakes races Saturday on Arlington Million day was the $400,000 Secretariat Stakes (G1), a 1 1/4 mile trip over the turf for 3-year-olds. Take The Points was sent off as the 5-2 favorite in the field of 10, exiting a close third place finish in the Virginia Derby at Colonial Downs after finishing fourth in the Colonial Turf Cup. In to challenge him included 7-2 second choice Reb, winner of the American Derby, the main local prep for this event, and 4-1 third choice Black Bear Island, winless since taking the Dante Stakes at York in May, including a 7th place effort in the Grand Prix de Paris at Longchamp last out.

Jockey Elvis Trujillo sent 40-1 outsider Hoosier Kingdom to the lead first time past the stands and he set fractions of 25.71, 51.35, and 1:16.29 over the good turf while 2 lengths in front of Black Bear Island and Take The Points who battled for second down the backstretch. Hoosier Kingdom held a short lead into the stretch through a mile in 1:40.76, but he tired badly late to eventually finish last. Black Bear Island inherited the lead at the 3/16 pole and battled the rest of the way with Take the Points, bumping the favorite in mid stretch. In the final strides Take the Points pushed his head in front to get the hard-fought win in 2:05.41. It was a long 3 1/4 lengths back to 8-1 Laureate Conductor third. 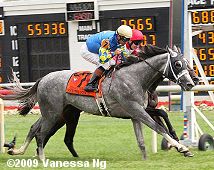 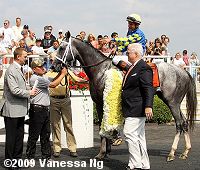 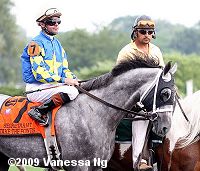 Left: Take the Points in the winner's circle.

Right: Take the Points in the post parade. His jockey Kent Desormeaux said, "He is a wonderful horse. He has a great stride and showed it throughout the race, and really had a strong stride down the lane. He was comfortable down the backstretch and had a ton of fight at the end. It was a great race, and he ran great." 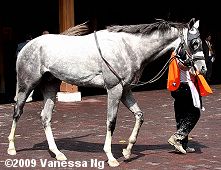 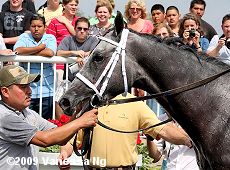 Left: Take the Points in the paddock before the race. Michael McCarthy, assistant to trainer Todd Pletcher said, "The distance was a bit of a question mark coming in to this race, but I think he answered that question today."

Right: Take the Points heads back to the barn after the race. 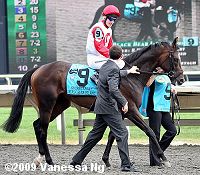 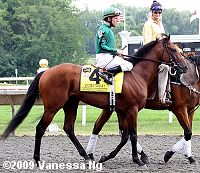 Left: Second place finisher Black Bear Island in the post parade. His jockey John Murtagh said, "My horse ran a very good race. Two furlongs out I thought I had it. It was just the last 20 yards or so he went dead on me. The winner just got me at the wire." Black Bear Island was sold before the race and will be sent to California to new trainer Julio Canani.

Right: Third place finisher Laureate Conductor in the post parade. His jockey Ramon Dominguez said, "I had a great trip. When it was time to go, my horse gave me a good run but couldn't really get to the top two."

On to the Arlington Million won by Gio Ponti
On to the Beverly D. won by Dynaforce