The feature race on Thanksgiving Saturday of Del Mar's Bing Crosby Season was the $250,000 Seabiscuit Handicap (G2) for older horses going 1 1/16 miles on the Jimmy Durante turf course. Conditions were excellent with sunny skies and temperatures in the mid 60's for the 3,596 fans in attendance at the seaside oval. Hong Kong Harry was sent off as the 8-5 favorite in the field of 8 off his Del Mar Mile (G2) win after finishing second in the Eddie Read (G2), both at Del Mar. In to challenge him included 3-1 second choice Santin, ninth in the Coolmore Turf Mile (G1) at Keeneland after winning the Arlington Million (G1) at Churchill Downs, and 7-2 third choice Set Piece, fourth in the Coolmore Turf Mile after winning the Baltimore Washington Turf Cup (G3) at Pimlico.

Jockey Mike Smith sent 19-1 Masteroffoxhounds to the lead first time by and he set fractions of 23.32, 46.31, and 1:09.56 while pressed by 4-1 fourth choice Smooth Like Strait and stalked by Santin. Turning for home Masteroffoxhounds opened up a 2 1/2 length lead through 1 mile in 1:33.73 but Hong Kong Harry, fifth early under Flavien prat, came out 3 wide and outfinished late-running Beyond Brilliant to win by a head in 1:39.79, just 0.29 seconds off the course record. It was another head back to Masteroffoxhounds third, completing the three-horse photo finish. 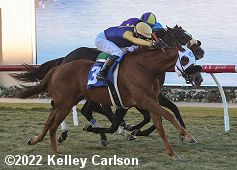 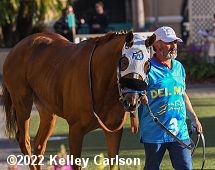 Left: Hong Kong Harry in the winner's circle. Winning trainer Phil D'Amato, who trains the first two finishers said, "Flavien rode him with a lot of confidence. He could sense they were flying up there. He waited a little bit longer than usual, but he came with a great, late kick, and the time was ultra-fast. This horse has got a heart of gold. He's just one of those horses—he's not the prettiest horse but he's got the best constitution, the best heart, and the best turn of foot, lately. I think he's as good of a miler as there is on the West Coast. Maybe focus around the mile races. He's not Breeders' Cup nominated, so (in order to run in next year's BC Mile at Santa Anita) he's going to have to show us next year by winning some of these mile preps that he can pay his way in there. But, if he keeps running like this, I think it's a very good possibility."

Right: Hong Kong Harry in the paddock before the race. Winning jockey Flavien Prat said, "I felt like the pace was hot. I didn't want to force him to keep up. Turning for home, I thought I would win. I got to the eighth pole and they weren't slowing down. He really gave me another gear." 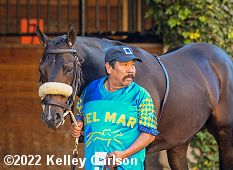 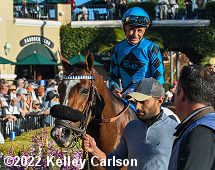 Left: Second place finisher Beyond Brilliant in the paddock before the race. Jockey Victor Espinoza said, "It's unbelievable the way the horse has changed. I think he's getting smarter to not use his energy early."

Right: Third place finisher Masteroffoxhounds in the walking ring. Trainer Phil D'Amato (who also trains the winner) said, "I'm proud of both my horses. They were about a neck apart, really."