Saratoga Race Course's 2021 season kicked off on Thursday afternoon under partly cloudy skies and temperatures in the low 80's, with the main track fast and the turf courses good. In the first stakes event of the meeting, a field of 6 three-year-olds sprinted 5 1/2 furlongs on the Mellon turf course in the $120,000 Quick Call Stakes (G3). Golden Pal was sent off as the 2-5 favorite, unraced since winning the Breeders' Cup Juvenile Turf Sprint (G2) in November. In to challenge him included 4-1 second choice Jaxon Traveler, second in the Chick Lang (G3) at Pimlico and the Woodstock at Woodbine, and 12-1 Kentucky Pharoah, who unseated his rider at the start in a Belmont allowance after finishing 5th in the Kitten's Joy (G3) at Gulfstream.

Jockey Irad Ortiz Jr. sent Golden Pal to the front soon after the start through fractions of 21.92 and 44.88 while pressed by Jaxon Traveler and stalked by Kentucky Pharoah. In the stretch, Golden Pal opened up a 3 1/2 length lead through 5f in 56.54. Kept to task by Ortiz, Golden Pal cruised the rest of the way to win by 3 lengths over late-running 36-1 longest shot Omaha City in 1:02.99. It was 1/2 a length back to Jaxon Traveler third. 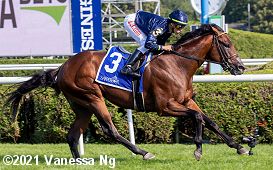 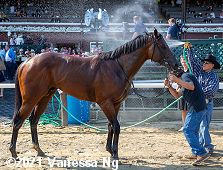 Left: Golden Pal in the winner's circle. Winning trainer Wesley Ward said, "He's so extremely talented and quick. He's a big horse and he moves like a cat and that's where he really has an advantage. I was a little concerned going into the race that I didn't have a gate work into him, but he's so smart that he overcame that in the first jump. When they said 'go,' he was gone."

Right: Golden Pal gets hosed off after the race. Winning jockey Irad Ortiz Jr. said, "He's a nice horse. I'm happy he came back where he left off. He broke really nice for me. When I asked him, he responded really well. I didn't want to ask too early. I didn't want him to do too much, he's been off for a long time." 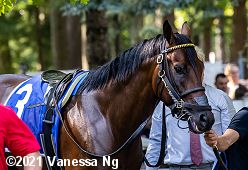 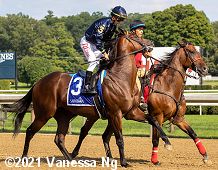 Left: Golden Pal in the paddock before the race. Ward added, "The bigger races are here in the next months and heading into the fall and then the Breeders' Cup, so this is when you want to see them do this. It's great (to win on opening day). Hopefully, we can keep it rolling." 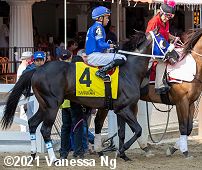 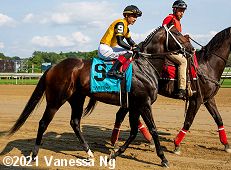 Left: Second place finisher Omaha City heads out to the track before the race. Jockey Manny Franco said, "I knew the pace was going to be hot, so I just tried to relax my horse and make him finish at the end. He responded really well."


The traditional feature on opening day is the $150,000 Schuylerville Stakes (G3) for two-year-old fillies sprinting 6 furlongs on the main track. A field of 7 went to post with Mainstay sent off as the 6-5 favorite off her 7 3/4 length debut win at Monmouth Park on June 4. In to challenge her included 11-4 second choice Pretty Birdie, a debut winner at Churchill on June 18, and 5-1 third choice Velvet Sister, off her debut win at Belmont on June 10.

Jockey Luis Saez sent Pretty Birdie to the lead through fractions of 22.29 and 45.82 while pressed by Mainstay and stalked by Velvet Sister and 7-1 Eagle Express. Into the lane Pretty Birdie opened up a 2 length lead through 5f in 58.40. Kept to task by Saez, Pretty Birdie maintained her lead the rest of the way to win by 2 lengths over Mainstay in 1:12.32. It was a long 5 1/4 lengths back to 18-1 Saucy Lady T third. 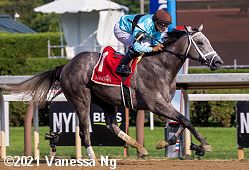 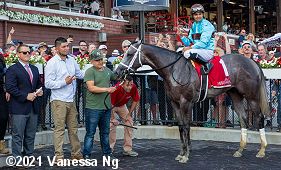 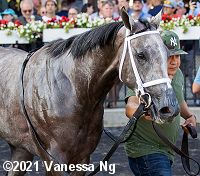 Left: Pretty Birdie in the winner's circle. Winning owner John Hendrickson said, "It means so much. The smiling faces and having Saratoga back the way it should be and having a win. It's very special. This is where [the late Marylou Whitney] felt the most alive. This is the way she is alive and she has a win on opening day. It's pretty special. This is a dream come true for me and Marylou. Things getting back to normal and winning on Opening Day, she's throwing a party. She said 'I want to race, get back to work.'"

Right: Pretty Birdie heads back to the barn. 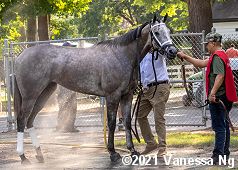 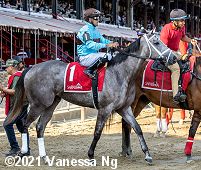 Left: Pretty Birdie in the paddock before the race. Winning trainer Norm Casse said, "I feel like she was a little more green today. She didn't want to switch leads down the lane. I was a little bit concerned about that as she was finishing, but I think that was just her seeing a new place. "[The break was] very important but that's why we put Luis in the irons. I knew going in that I had a horse that's extremely quick and I think we took advantage of the fact that we got the best rider for this type of horse."

Right: Pretty Birdie heads out for the post parade. 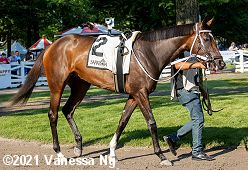 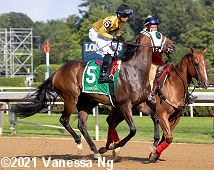 Left: Second place finisher and beaten favorite Mainstay in the paddock. Trainer Butch Reid Jr. said, "I think she ran well. It was a quality horse that beat her. My jockey was a little upset that she wasn't standing quite right in the gate and they snapped it before she was really ready. She had one leg that was underneath the next stall. I think maybe if she breaks a little better, who knows, but she didn't get away from the gate clean. He said she saw something in the lane and ducked in a little bit. Maybe it was the crowd." 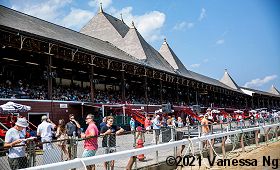 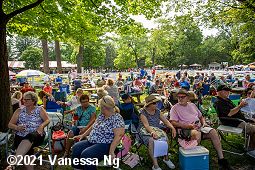 Spectators were back at Saratoga for the first time since 2019 with 27,760 fans in attendance. After winning the Quick Call Stakes, jockey Irad Ortiz Jr. said, "It's awesome to have the fans back. They're happy and they make me feel good." 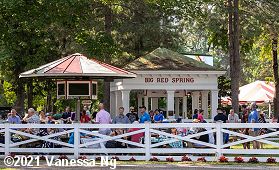 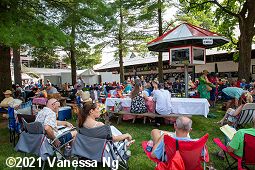