Saratoga Race Course's 2015 season kicked off on Friday afternoon, with 34,783 fans enjoying partly cloudy skies and temperatures in the mid 80's, with passing showers. A field of 9 three-year-fillies contested the $200,000 Lake George Stakes (G2) at 1 1/16 miles on the Mellon turf course. Breeders' Cup Juvenile Fillies Turf (G1) 6th place finisher Partisan Politics was sent off as the 5-2 favorite off her close second in the Wild Applause. In to challenge her included 4-1 second choice Mississippi Delta, winner of the Glorious Song and the Alywow both at Woodbine, and 9-2 third choice Mrs McDougal, fourth in the American Oaks (G1). 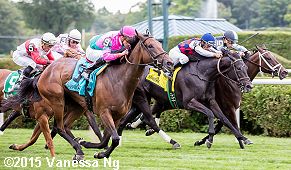 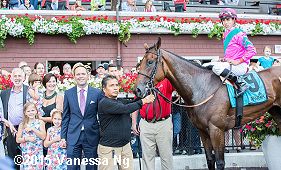 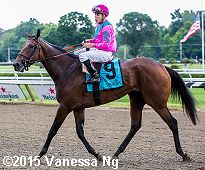 Left: Mrs McDougal in the winner's circle. Winning jockey Irad Ortiz Jr. said, "I got a good trip, a little wide, but it worked out good. I just rode my race. I was comfortable and in a great spot. She's a nice filly. She can go to the lead, she can come from off the pace, it doesn't matter."

Right: Mrs McDougal returns after the race. Winning trainer Chad Brown said, "I was a little concerned; I knew she didn't have the greatest post with the 6. I was hoping we could save a little more ground early. She didn't get away from the gate great and got hung out most of the race. I was concerned we were losing too much ground. But she overcame it. As much planning as you do, as many horses as you have, Saratoga is tough for anybody and we don't take any wins for granted." 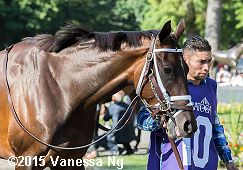 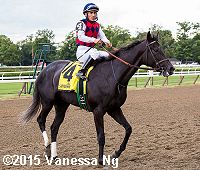 Left: Second place finisher Feathered in the paddock before the race. Trainer Todd Pletcher said, "I thought she ran very well. We kind of had pressure all the way. It's tough when you have to carry 123 pounds from the 10 post, but I thought she almost overcame it."

Right: Third place finisher Cara Marie returns after the race. The 20-1 shot pressed the pace under Paco Lopez then held on to finish third beaten 1/2 a length. The Kellyn Gorder trainee improved her record to 2 wins 0 seconds, and 1 third in 6 starts, earning $87,050 for owner Three Chimneys Farm. 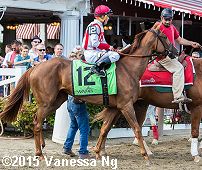 Fourth place finisher and beaten favorite Partisan Politics in the post parade. The 5-2 favorite was 8th early under Javier Castellano then rallied to get fourth beaten just 3/4 length. The Chad Brown trainee has a record of 1 win, 1 second, and 1 third in 6 starts, earning $108,300 for owners Klaravich Stables and William Lawrence.


The traditional feature on opening day is the $150,000 Schuylerville Stakes (G3) for two-year-old fillies sprinting 6 furlongs on the main track. A field of 8 went to post, with Belmont debut winner Positively Royal sent off as the 6-5 favorite over 3-1 Moment is Right, winner of the Astoria, and 5-1 Decked Out, runner-up in the Astoria.

Moment is Right set the pace of 22.15 and 45.52 while stalked by 9-1 Off the Tracks and Decked Out down the backstretch and around the turn. At the 3/16 pole, Off the Tracks surged past the tiring pacesetter. Kept to task by Luis Saez, Off the Tracks drew off to win by 3 1/4 lengths over late-running 11-2 Banree in 1:11.27 over the fast main track. It was a long 4 3/4 lengths back to Decked Out third, while favorite Positively Royal tired badly to finish last. 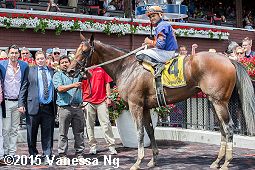 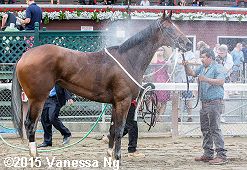 Left: Off the Tracks in the winner's circle. Trainer Roderick Rodriguez, celebrating his first graded stakes win said, "I think she's going to be better going longer, so I was expecting just to finish strong but the race presented itself different. She was right there second and that surprised me, that she was right there so soon. I was just hoping for a good finish."

Right: Off the Tracks gets hosed off after the race. Winning jockey Luis Saez said, "I feel amazing. I knew the filly was good, and she was coming from Florida. She had a good debut and was training good. When I got her in the clear, I knew she was going to win." 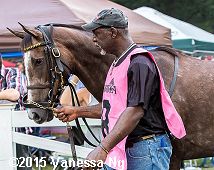 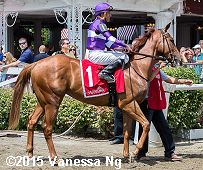 Left: Second place finisher Banree in the paddock before the race. The 11-2 fourth choice raced 4th under Rafael Hernandez then rallied to get second beaten 3 1/4 lengths. The Wesley Ward trainee improved her record to 1 win, 1 second, and 0 thirds in 3 starts, earning $70,000 for owner Mark Dodson.

Right: Third place finisher Decked Out heads out for the post parade. The 5-1 third choice raced 3 lengths off the pace under Kent Desormeaux then passed tired horses to get third beaten 8 lengths. The Keith Desormeaux trainee improved her record to 1 win, 1 second, and 1 third in 3 starts, earning $98,600 for owners Big Chief Thoroughbreds and Gene Voss. 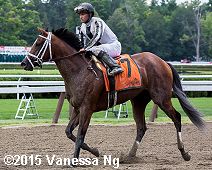 Last place finisher and beaten favorite Positively Royal returns after the race. Trainer Todd Pletcher said, "She broke OK, but she kind of got bumped repeatedly down the backside by the outside horse. She just didn't fire today."