The feature race on the Sunday of Whitney weekend at Saratoga was the $700,000 Saratoga Oaks Invitational (G3), for 3-year-old fillies going 1 3/16 miles over the Mellon turf course. Conditions were typical for early August with sunny skies and temperatures in the low 90's. After Regret (G3) winner Walkathon scratched, just 5 went to post With The Moonlight was sent off as the 11-10 favorite off her second place finish in the Belmont Oaks Invitational (G1). In to challenge her included 7-5 second choice McKulick, winner of the Belmont Oaks, and 6-1 third choice Contemporary Art off her maiden win at second asking.

Jockey Flavien Prat sent Contemporary Art to the lead first time by and she set fractions of 24.91, 50.14, and 1:15.18 while pressed by With The Moonlight and stalked by McKulick. Turning for home Contemporary Art tired allowing With the Moonlight to inherit the lead through 1 mile in 1:38.09. Kept to task by jockey William Buick, With The Moonlight pulled away to a 1 3/4 length win over McKulick in 1:54.60. It was a neck back to 11-1 longest shot New Year's Eve third. 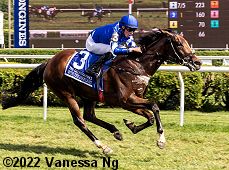 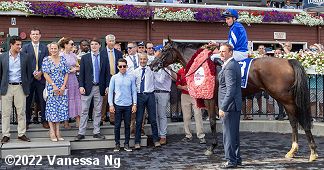 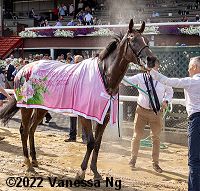 Left: With The Moonlight in the winner's circle. Winning trainer Charlie Appleby said, "On the evidence of today and evidence of (the Belmont Derby), coming back a half a furlong suited her. She's got plenty of boot. You could almost bring her back to a mile. The more races she's got, the more experience she's got. She's learning how to do it. It was a good performance today. I felt comfortable coming into today. We respected Chad's [Brown] filly [No. 2, McKulick] but we were confident we'd be running her a bit closer this time. Will [Buick] had a great ride around there and once he gave her the signal, I was pretty confident that she'd see that out. They looked comfortable and she was in a nice rhythm. She was travelling well within herself. They'd gone nice even fractions and I knew coming off the turn that William had her in A1 position."

Right: With The Moonlight gets hosed off after the race. Winning jockey William Buick said, "She felt really good today. I think the team had been really happy with the way she was training, so they were quietly confident going into it. She travels very well, which is key really. Our horses coming from Europe to here, they always improve with one run on these tracks. It's a lot different for them. Yesterday [with Nations Pride] and the filly today, they were always going to improve off that first run and I think they showed that. It's nice to come over here with two nice horses, two nice rides and two winners. It's a real privilege to be here to be honest. It really feels special." 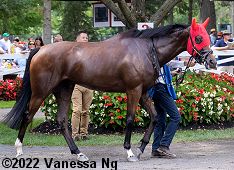 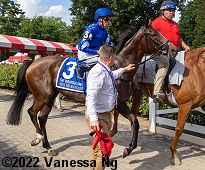 Left: With The Moonlight in the paddock before the race. Appleby added, "When there were three of Chad's horses in there and to be fair to the Dubawi filly [No. 5, Contemporary Art], she led when she broke her maiden. We were going to try and jump to the lead and see if anyone wanted to take it off us, but she was a half a stride slow from there and the race developed the way it did. We were happy with it."

Right: With The Moonlight heads out for the post parade. Appleby added, "No. Unfortunately, not (going to run in the Jockey Club Oaks). We might find one for it. The questions mark was whether the Oaks would be something to look at, but that's clearly not an option for her. William said that was far enough for her today. Everybody at Saratoga have been very kind to us and very hospitable. They looked after myself and my team very well. Obviously, it's great to have the winners, but it's my first time here and I thoroughly enjoyed it. It's an amazing place and I can see why there's been a lot of history and a lot of fun had here." 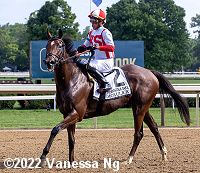 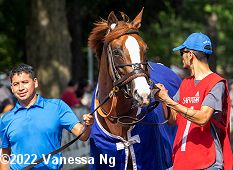 Left: Second place finisher McKulick returns after the race. Trainer Chad Brown said, "There really wasn't any pace in the race today. It was a totally different setup. The winner ran very well. She was positioned in front of us and really outkicked us. We weren't too far behind her. She outkicked us today off that pace, so hats off to her. McKulick ran very credibly. We'll just regroup with her and see. We don't really have any plans for her right now."

Right: Third place finisher New Year's Eve heads into the paddock. Jockey Tyler Gaffalione said, "I had a pretty smooth trip. The slow pace definitely affected us with her being a dead closer, but I couldn't change up her running style. I just had to let her do her thing. I was very happy with her performance and she finished up really well. It was a talented group of fillies and she held her own. [The turf] dried up quite a bit now, it's got a little bit better footing and the horses are getting over it comfortably." 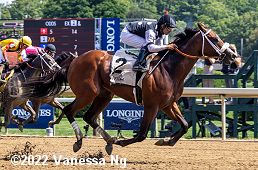 The $200,000 Adirondack Stakes (G3) featured a field of 6 two-year-old fillies sprinting 6 1/2 furlongs on the main track. Naughty Gal was sent off as the 7-5 favorite off her maiden win by 9 1/4 lengths at Churchill Downs at second asking. In to challenge her included 11-4 second choice Promise of Hope , a debut winner at Churchill Downs, and 9-2 third choice Sabra Tuff, second in the Debutante at Churchill Downs.

Jockey Luis Saez sent Naughty Gal to the lead out of the chute through fractions of 22.46 and 46.15 while pressed by 5-1 Apple Picker and stalked by 7-1 Janis Joplin. Turning for home, Naughty Gal opened up a 2 length lead through 3/4 in 1:12.09. Despite drifting 6 wide, Naughty Gal cruised the rest of the way to win by 2 1/2 lengths over Janis Joplin in 1:18.97. It was a head back to Sabra Tuff third.
Results Chart 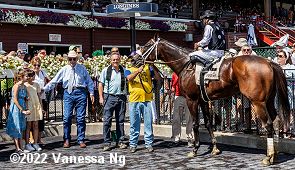 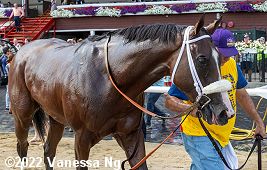 Left: Naughty Gal in the winner's circle. Winning trainer D. Wayne Lukas said, "She's never been on this racetrack. It was her first time stepping foot on it. She always would train on the Oklahoma track, so that's one thing. But I think what happened was [Luis Saez] didn't want to be down on the inside or on the rail. He said the rail is not the place to be. Looking at it and thinking about it, I think what happened [when she went wide in the turn] was he came off the turn and decided to go wide and suddenly figured he was a lot wider than he wanted to be. I think it probably made it worse than it was."

Right: Naughty Gal heads back to the barn after the race. Winning jockey Luis Saez said, "Pretty good trip. She broke from there pretty clean and took the lead, controlled the pace. She was a little green. At the three-eighths, her ear was back-and-forth looking at something and got a little lost, but she kept running and going. She gave me another gear and ran good." 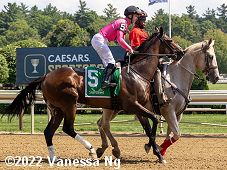 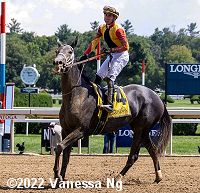 Left: Second place finisher Janice Joplin in the post parade. Jockey Flavien Prat said, "She ran really well and broke better than last time. She got us into the race and we were traveling well. I thought she could win for a little bit, but [Naughty Gal] was just better. She's improving." Trainer Mark Casse added, "I thought we had a good shot, and then coming down [the stretch], I couldn't tell whether we were in front or who was in front. We were watching from the wire and when they got up close, I was like, 'Oh well, second.'" 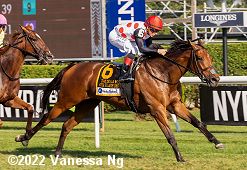 Closing out the weekend's stakes action was the $135,000 Fasig-Tipton De La Rose Stakes featuring a field of 8 older fillies and mares going 1 mile on the inner turf. Perfect Sting Stakes third place finisher Love and Thunder was sent off as the 5-2 favorite over 7-2 second choice Jouster, winner of the Perfect Sting after finishing third in the Intercontinental (G3), and 4-1 third choice Our Flash Drive, third in the Nassau Stakes (G2).

Jockey John Velazquez sent 9-1 In Good Spirits to the lead first time by through fractions of 24.46, 49.20, and 1:13.15 while pressed by Jouster and stalked by 15-2 Plum Ali. Turning for home In Good Spirits tired as Our Flash Drive, 4th early under Dylan Davis, came out 4 wide to sweep to the lead through 3/4 in 1:13.15. Plum Ali gave chase but Our Flash Drive held her off to win by a length in 1:35.42. It was another 1/2 length back to late-running favorite Love And Thunder third.
Results Chart 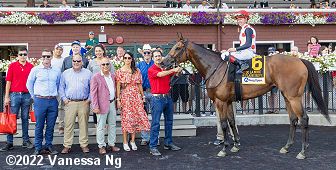 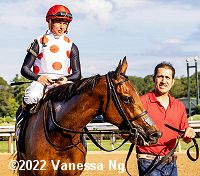 Left: Our Flash Drive in the winner's circle. Winning trainer Mark Casse said, "I wasn't comfortable [being wide] but there wasn't much I could do about it at that point in time. You always want to save ground, but I did tell [Dylan Davis], 'I think she's the best horse in the race - ride her that way.' And he did. We all know how tough this turf course is to win [on] when you don't save ground. I think she broke OK, and then she took off with [Dylan Davis] a little. She's been a project. She's not an easy horse. Her last breeze was at Woodbine and it was all done by plan because she likes it there. I just brought her in for the race."

Right: Our Flash Drive returns after the race. Winning jockey Dylan Davis said, "It was maybe 2-3 wide, I was never planning on tucking her in too much. If I didn't want to go four-wide, I would have to tuck her after that, but it was basically being forwardly placed, laying second or third going into that first turn and that's exactly what we got. She was giving me everything she's got. She ran hard and I didn't think there was much behind me to catch me. When I asked her, I knew it was game time. I knew [Plum Ali] was trying to come up the fence so I kept her focused, even though she got the lead a touch early. Even then, she was still running." 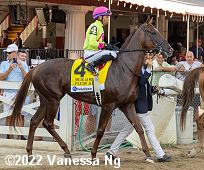 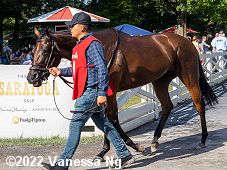 Left: Second place finisher Plum Ali heads out to the track. Jockey Manny Franco said, "I was in a good position the way [trainer Christophe Clement] wanted me to ride her. The hole opened up late, but that's the way the race set up. She's pretty nice and she always gives me her best. I'm just glad to be able to ride her."

Right: Third place finisher and beaten favorite Love and Thunder in the paddock before the race. The Chad Brown trainee improved her record to 3 wins, 5 seconds, and 3 thirds in 14 starts, earning $244,341 for owners John and Tanya Gunther.