The feature race on the Sunday of Whitney weekend at Saratoga was the $700,000 Saratoga Oaks Invitational (G1), for 3-year-old fillies going 1 3/16 miles over the Mellon turf course. Conditions were excellent with partly cloudy skies and temperatures in the low 80's. Wonder Again (G3) winner Con Lima was sent off as the 3-1 favorite in the field of 8 off her close second in the Belmont Oaks (G1). In to challenge her included 13-4 second choice Creative Flair, a close third in the Prix Chloe (G3) at Chantilly, and 9-2 third choice Rocky Sky, winner of the Salsabill Stakes at Navan. 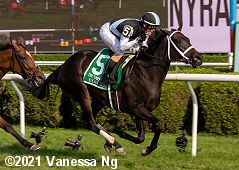 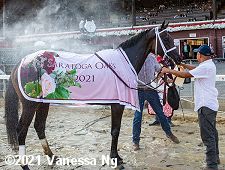 Left: Con Lima in the winner's circle. Winning trainer Todd Pletcher said, "I was analyzing the race beforehand and we were the only speed but I wasn't 100 percent sure with a couple of the Euros if they would show some initiative. I left it in Flavien's [Prat] hands and Plan A was to break well and see if anybody would try to take the lead away from us and if they didn't, we'd be happy to have it. It worked out really well."

Right: Con Lima gets hosed off after the race. Winning jockey Flavien Prat said, "The speed was pretty much me and the Godolphin filly [No. 7, Creative Flair] and it seems she broke a step slow. I broke better than her and I ended up on the lead." 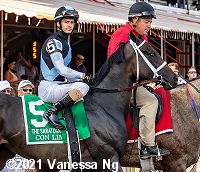 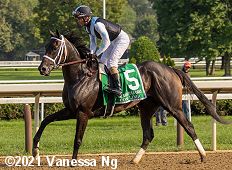 Left: Con Lima heads out for the post parade. Pletcher added, "He [Prat] just gradually got up there instead of having to hustle her and use her. She relaxed really well. You could see when she turned up the back side and her ears were flicking back and forth that she was in a happy zone. People asked me if I was confident she would handle the distance. I've always thought she would handle the distance. I'm a little surprised at where the turf comes from. It's not obvious in her pedigree, but she seems to handle it really well."

Right: Con Lima returns after the race. Prat added, "Going to the first turn I felt really comfortable. I was really pleased with the way she was traveling and I felt we were doing some easy fractions. She really kicked on well. I got her ready to kick and she really did. When she swapped leads, she responded well from that point." 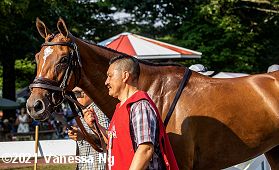 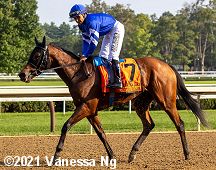 Left: Second place finisher Higher Truth heads into the paddock. Jockey Jose Ortiz said, "It was a great trip. We were right behind the winner the whole way. She went very easy for the second quarter, so that helped us a lot. When it was time to go to her, she out-ran me. We were second-best."

Right: Third place finisher Creative Flair returns after the race. Jockey Mike Smith said, "She didn't jump at all. The rail was [18] feet out. I couldn't circle them all. So, I just covered her up and actually that's the kind of trip you like on a grass horse, but she's a front runner. I finally got a trip on the grass and I was supposed to be on the lead." 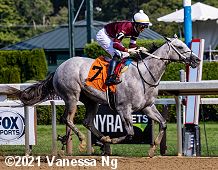 The $200,000 Adirondack Stakes (G2) featured a field of 9 two-year-old fillies sprinting 6 1/2 furlongs on the main track. Ontheonesandtwos was sent off as the 2-1 favorite off her close second place finish in the Debutante at Churchill Downs. In to challenge her included 11-4 second choice Microbiome, a debut winner last out, and 4-1 third choice Mainstay, second in the Schuylerville (G3) on the opening day of the meet.

Jockey Jose Ortiz sent 9-2 fourth choice Wicked Halo to the lead out of the chute and she set fractions of 21.55 and 44.80 while pressed by Microbiome and stalked by Mainstay. Turning for home, Wicked Halo left the field behind, opening up a 1 1/2 length advantage through 3/4 in 1:11.01 and drawing off to win by 3 1/2 over late-running 16-1 Interstatedaydream in 1:17.99. It was another 1/2 length back to 37-1 longest shot Saucy Lady T third, while favorite Ontheonesandtwos raced 6th early after bobbling at the start and failed to rally finishing 6th beaten 7 1/4 lengths.
Results Chart 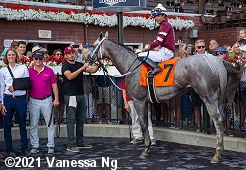 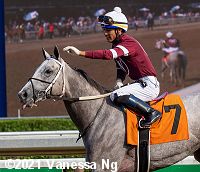 Left: Wicked Halo in the winner's circle. Winning trainer Steve Asmussen said, "Ron [Winchell, owner-breeder] giving us horses like this makes all the accolades possible. This filly, her mother won the Adirondack [Just Wicked, 2015], and what a great sire Gun Runner is proving to be. To duplicate what her mother did is very special. The filly on the outside outbroke her a little bit. They ride aggressively here and horses either respond or get beat and she responded. For a 2-year-old filly, and the way she acted in the paddock off hard races, it's a level of class that is hard to come by."

Right: Wicked Halo gets a pat as she returns after the race. Winning jockey Jose Ortiz said, "In these 2-year-old stakes races there's going to be pace because a lot of them break their maiden wire-to-wire or are just sitting off it. A lot of times, the pace is going to be hot in races like this, and it was hot this time. Tyler [Gaffalione aboard Microbiome] broke better than me. I put her up there and she responded well. They were going fast, but she was ready. Steve had her ready to run." 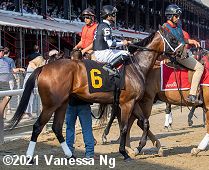 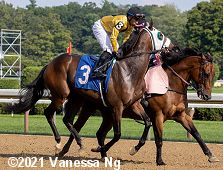 Left: Second place finisher Interstatedaydream heads out to the track before the race. Jockey Luis Saez said, "She tried. She broke from there well and ran pretty well. I'm really happy with how she ran." 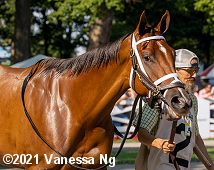 Sixth place finisher and beaten favorite Ontheonesandtwos in the paddock before the race. The Norm Casse trainee has a record of 1 win, 1 second, and 0 thirds in 3 startsm, earning $88,088 for owners Deuce Greathouse, Cindy Hutson, Madaket Stables, and Thomas Romano. 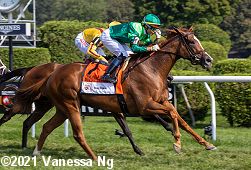 Kicking off the Sunday stakes trip was the $120,000 Fasig-Tipton De La Rose Stakes featuring a field of 7 older fillies and mares going 1 mile on the inner turf. Last year's winner Viadera was sent off as the 6-5 favorite, unraced since winning the Matriarch (G1) at Del Mar in November, over 8-5 Regal Glory, 4th in the Just a Game (G1), and 13-2 Shifty She, winner of the Ginger Punch at Gulfstream.

Jockey Irad Ortiz Jr. sent Shifty She to the front first time by and she set fractions of 23.89, 48.58, and 1:12.20 while pressed by 33-1 longest shot Belle Laura and stalked by 10-1 Hendy Woods. Shifty She continued to lead to midstretch through 7f in 1:23.25 but Regal Glory, 6th early under Jose Ortiz, came out 6 wide for room and rallied to win by 1/2 a length over Hendy Woods in 1:34.85. It was another 1 1/4 lengths back to Shifty She third, and another length back to favorite Viadera fourth.
Results Chart 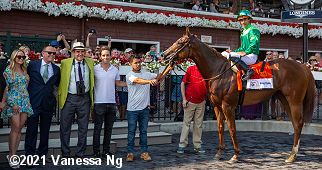 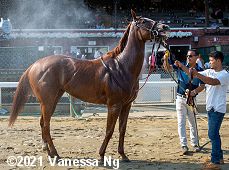 Left: Regal Glory heads into the winner's circle. Winning trainer Chad Brown said, "She got a really bad trip in the Just a Game which was unfortunate because she was really primed to run a big one and she did, it just didn't work out for her. But we regrouped. I spoke to Mr. [owner Peter] Brant and said, 'Let's get her to Saratoga and let's put her in a race where she can get a good trip,' and hopefully put a W under her belt with the eye of trying to win a Grade 1 with her this year, which is why he kept her in training after he bought her. We'll see what's next for her, but for now we'll just enjoy this."

Right: Regal Glory gets hosed off after unsaddling. Winning jockey Jose Ortiz said, "I broke running but I knew the pace was fast when Saez [Luis, aboard Raven's Cry] wasn't anywhere close. [Saez] had speed and he wasn't there, so I knew it was kind of fast. I just sat there and followed him. I was following the right horse but Tyler [Gaffalione, aboard Hendy Woods] had a great trip on the inside and it made it closer than it should be. I knew I had him." 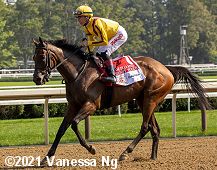 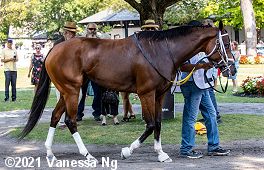 Left: Second place finisher Hendy Woods returns after the race. Jockey Tyler Gaffalione said, "Everything went to plan. The speed set a nice tempo in front of us and I was able to tuck in and save some ground. I had every chance down the stretch. She gave me a huge run. We just couldn't get the bob today. That's horse racing. I'm super proud of my filly. She ran big today."

Right: Third place finisher Shifty She in the paddock before the race. The Saffie Joseph Jr. trainee improved her record to 5 wins, 0 seconds, and 1 third in 8 starts, earning $189,395 for owner-breeder Chris Pallas and co-owner Harvey Rothenberg. 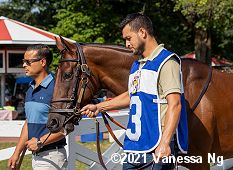 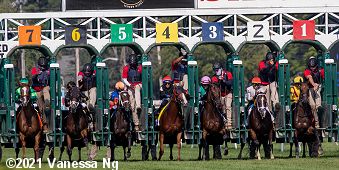 Left: Fourth place finisher and beaten favorite Viadera. Trainer Chad Brown said, "She had a rough trip for her first time back. It happens sometimes when you have a late-running horse like that. I spoke to Joel [Rosario] briefly and he was frustrated because he had to stop a couple of different times and by the time she got clear, it was just too late. She got started a lot later than we had hoped this year. Now that she has a race under her belt, hopefully she'll move forward."

Right: The horses break from the gate for the De La Rose Stakes.