The feature race at Santa Anita on Sunday was the $200,000 Santa Ynez Stakes (G2) for 3-year-old fillies sprinting seven furlongs on the main track. Conditions were excellent again with sunny skies, a fast track, and temperatues in the low 70's. After one scratch, Breeders' Cup Juvenile Fillies (G1) third place finisher Bast was sent off as the 3-5 favorite in the field of 6 off her win in the Starlet (G1) at Los Alamitos. In to challenge her included 5-2 second choice Auberge, a debut winner last out at Santa Anita, and 4-1 third choice Golden Principal, off her debut win at Del Mar.

Jockey Flavien Prat sent Auberge to the front exiting the chute through fractions of 22.02 and 44.59 while pressed by Golden Principal and stalked by Bast. Turning for home, Auberge continued to lead through 3/4 in 1:09.99 but Bast, confidently ridden by Drayden Van Dyke, came out 3 wide for room and rallied by at the 1/16 pole to win going away by 1 3/4 lengths in 1:23.42. It was another 2 1/2 lengths back to Golden Principal third. 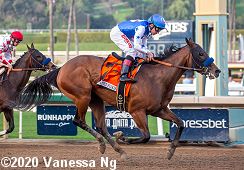 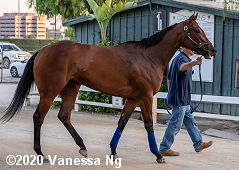 Left: Bast in the winner's circle. Winning trainer Bob Baffert, who trained the first 3 finishers, said, "Bast looked like she was in trouble at the 5/16 pole. I heard Frank (Mirahmadi, announcer) say she was coming under pressure and (Authentic and Golden Principal) were looking good. She came out of the Breeders' Cup (Juvenile Fillies, third going 1 1/16 miles) well. She's a picture of health and that's why we ran her today. You hate to run three in a race like that but it's a graded race and its $200,000. I want to give all my clients a chance at it. I've gone sort of easy on her for this race. Those are two really good fillies that she was chasing there, as you can tell by the way they were spread out. They showed up, they ran well so here we are."

Right: Bast back at the barn after the race. Winning jockey Drayden Van Dyke said, "The outside post gives you the option of being able to read the pace. When we got near the quarter pole, the other two were going easy, so I had to get after her. She was shortening up out of a route, but she kicked it in." 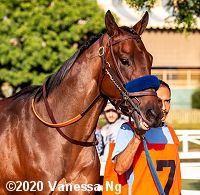 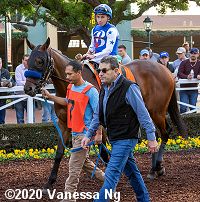 Bast in the paddock before the race. Baffert added, "She was doing really well, she looks great and I just hate training them too long they could get hurt in the mornings. As long as they are doing well and you enter them, the more races you get into 'em it is better for them. Especially those other two, there was no race for them, so I think they are going to get a lot out of it. They'll move way up from this. Bast I can just freshen her up."

Van Dyke added, "There was a concern, Bob said the horses were running a big race so I really had to get after her but she showed her class today. I'm very lucky to be in the position I'm in right now. I'm blessed, I am grateful." 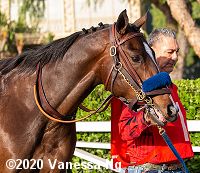 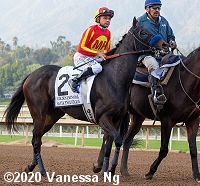 Left: Second place finisher Auberge in the paddock before the race. The Bob Baffert trainee improved her record to 1 win and 1 second in 2 starts, earning $70,000 for owner Speedway Stable.