The feature race on Saturday at Santa Anita was the $200,000 Santa Monica Stakes (G2) for older fillies and mares sprinting 7 furlongs on the main track. Conditions were excellent with sunny skies and temperatures in the low 70's the 4,882 fans in attendance. Just five horses made the entry box with Breeders' Cup Filly and Mare Sprint (G1) winner Ce Ce sent off as the 1-2 favorite. In to challenge her included 11-4 second choice Merneith, last year's winner but 2nd in the Kalookan Queen last out, and 9-2 third choice Kalypso, winner of the La Brea (G1).

Jockey Edwin Maldonado sent Merneith to the lead exiting the chute and she set fractions of 22.39 and 45.75 while pressed by 12-1 Park Avenue and stalked by Ce Ce and Kalypso. Turning for home, Merneith continued to lead through 3/4 in 1:09.98. Kept to task by Maldonado, Merneith drew off late to win by 3 lengths over favorite Ce Ce in 1:22.39. It was another 3 3/4 lengths back to Kalypso third. 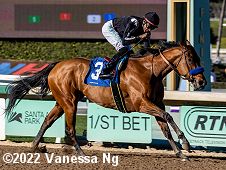 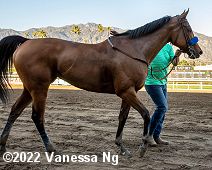 Left: Merneith in the winner's circle. Winning trainer Bob Baffert said, "She won this race last year and she needed her last race (on Jan. 2). Edwin gets along with her great and it was a perfect pace for her. Everything went well and when she's on, I've always thought very highly of her. She got to prove it today, she beat a good field of fillies. Today she put it all together…She came back (after her last start) and worked great, like a good horse. I'm so proud of her. You get attached to these fillies, especially (when they're by) American Pharoah."

Right: Merneith heads back to the barn after the race. Winning jockey Edwin Maldonado said, "It never gets old. I'm very happy. I just want to thank Bob for leaving me on her. I'm pretty sure he could have put anybody else but the fact that he put me back on her, it means a lot to me. I was just letting her do everything on her own, I didn't want to take anything away from her." 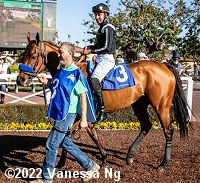 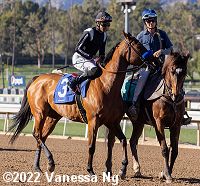 Left: Merneith in the paddock before the race. Maldonado added, When (Ce Ce) came (to) her, she saw her and picked it up on her own. I didn't even have to ask her. I'm very pleased. I know that last time, we sat second and she kind of shied away from the filly in front of her, and today Bob just told me to put her on the lead, so she did the rest. When we turned for home, I was pretty sure she was the winner, I didn't even ask her until she switched leads. She's a nice filly, she's just a nice filly."

Right: Merneith in the post parade. Baffert added, "Some of these riders, they don't get the chances. I've had a lot of luck with Edwin. He's calm, cool, collected. He's the kind of guy…He comes out (to the paddock) like he's ridden for me all my life. I can tell he's pretty cool…When I need him, I use him…This jockey colony, they're all really good, but they gotta get the right horses." 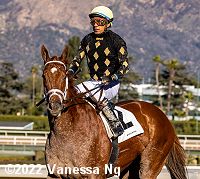 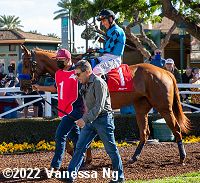 The $200,000 San Pasqual Stakes (G2) is a 1 1/8 mile main track contest for older horses prepping for the Santa Anita Handicap (G1) scheduled for March 5. San Antonio Stakes (G2) winner Express Train was sent off as the 8-5 favorite in the field of 6. In to challenge him included 2-1 second choice Eight Rings, third in the San Antonio, and 4-1 third choice Law Professor, winner of the Santa Anita Mathis Mile (G2).

Jockey John Velazquez sent Eight Rings to the lead first time by and he set fractions of 22.72, 47.16, and 1:11.75 while pressed by Express Train and stalked by Law Professor. Turning for home Eight Rings tired as Express Train took over through 1 mile in 1:37.32. Kept to task by Victor Espinoza, Express Train drew off late to win by 3 1/4 lengths in 1:50.99. It was another 2 1/2 lengths back to Eight Rings third. 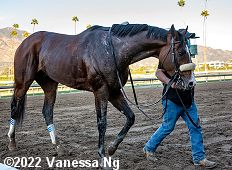 Left: Express Train in the winner's circle. Winning trainer John Shirreffs said, "I think this was a little bit more difficult for him. There was a lot going on early with the fast pace. He was in the two-hole…Nobody got to relax because Mike's horse (Smith, aboard American Theorem) came up on the outside and wanted to force the pace, so it was do or die time then. We're looking forward to the Big Cap. Mr. and Mrs. Searing have been loyal fans and patrons of the sport. It's just great to be able to train for them and to have a horse as good as Express Train for them."

Right: Express Train heads back to the barn. 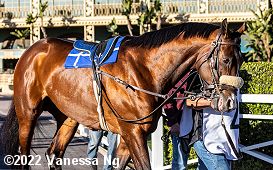 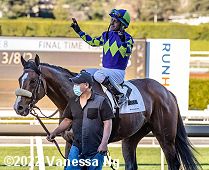 Left: Express Train in the paddock before the race. Winning jockey Victor Espinoza said, "It got a little bit complicated out of the gate because I thought the two horses outside of me were going to go and make the pace. Then the one decided to take back, and I already next to them, so that kind of made my decision to go forward and stay there rather than be stuck on the inside. It's all about the horses too. Express Train he helped me to move with such confidence, at that point that I was not afraid to just let him go. It was one of those things where you have to make a decision and hope for the best. Today it seemed like we did the right combination and it worked. 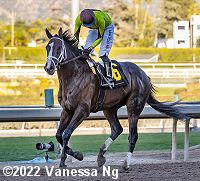 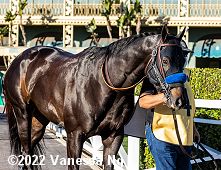 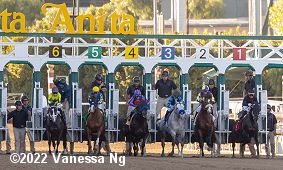 The horses break from the gate for the San Pasqual Stakes.

Kicking off the Saturday card was the $100,000 Thunder Road Stakes (G3) for older horses going 1 mile on the turf. Twilight Derby (G2) winner Subconscious was sent of as the 3-5 favorite in the field of 6 off his 5th place finish in the Hollywood Derby (G1). In to challenge him included 11-4 second choice Count Again, unraced since 5th in the Del Mar Mile (G2) in August, and 13-2 third choice Delaware, 4th in the Joe Hernandez Stakes (G2).

Jockey Chris Emigh sent 30-1 longest shot Sniper Kitten to the lead first time by and he set fractions of 23.32, 47.41, and 1:11.16 while pressed by Subconscious and stalked by 15-2 fourth choice Ready Soul. Turning for home Sniper Kitten tired allowing Subconscious to inherit the lead through 7f in 1:22.65, but Count Again, 4th early under Flavien Prat, came out 3 wide for room and rallied to win by 1/2 a length in 1:34.12. It was 3 lengths back to Ready Soul third. 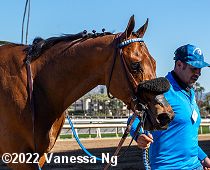 Left: Count Again in the winner's circle. Winning jockey Flavien Prat said, "I've been on this horse a few times in the morning, so I got to know him. We had a good trip today, he broke well and he put me in the race. He was traveling super all the way around there and when I asked him to run, he gave me a good kick."

Right: Count Again heads back to the barn. Winning trainer Phil D'Amato said, "The (time off) did him a ton of good. He told me in his last race at Del Mar, 'Hey, I've had a long campaign maybe it's time to give me a freshener.' And we did that. The owners have been great. Sam-Son Farms, Mark Martinez of Agave Racing, they just told me to give him all the time he needs, and we brought him back fresh and happy. I think Flavien got acquainted with him, breezing him the last couple of times and I think that helped him with his timing. He's a horse that just takes him a while to get in gear, but once he does, he's got a pretty impressive late turn of foot." 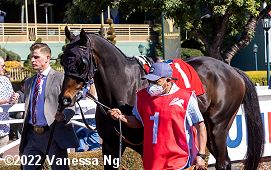 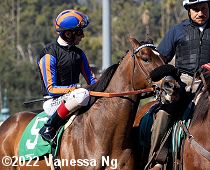 Left: Second place finisher and beaten favorite Subconscious in the paddock before the race. The Richard Mandella trainee improved his record to 3 wins, 2 seconds, and 1 third in 8 starts, earning $247,820 for owner LNJ Foxwoods.