The feature race on Saturday at Santa Anita was the $200,000 Santa Monica Stakes (G2) for older fillies and mares sprinting 7 furlongs on the main track. Rain earlier in the week downgraded both the main track and turf course to "good", with sunny skies and temperatures in the high 50's for the 9,558 fans in attendance. After 2 scratches, a short field of five faced the starter with Breeders' Cup Filly and Mare Sprint (G1) fourth place finisher Marley's Freedom sent off as the 7-10 favorite off her win in the Go for Wand Handicap (G3). In to challenger her included 3-1 second choice Escape Clause, winner of the La Canada (G3), and 5-1 third choice Paradise Woods, unraced since finishing 6th in the Osunitas at Del Mar in July.

Jockey Joe Talamo sent 11-2 fourth choice Selcourt to the front exiting the chute through fractions of 22.48 and 45.07 while pressed by Paradise Woods and stalked by Marley's Freedom. Entering the stretch, Selcourt continued to lead through 3/4 in 1:09.77. Marley's Freedom moved out for room by jockey Drayden Van Dyke and rallied past Selcourt inside the 1/8 pole to win going away by 1 1/4 lengths in 1:22.34. It was another 1 1/2 lengths back to 21-1 longest shot Mopotism third. 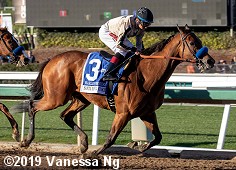 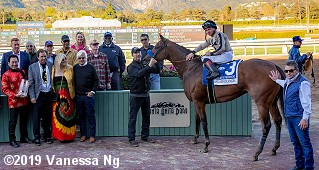 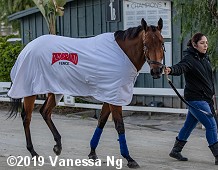 Left: Marley's Freedom in the winner's circle. Winning owner Ron Perry said, "We call what Marley does, she doesn't stalk she hunts. She was hunting Selcort all the way down the backside, Drayden had an intent to sit on her and not let her get away and that's what he did, he ran a perfect race, she ran a perfect race. My t-shirt is indeed a tradition (black tee under his open dress shirt with an image of Bob Marley on it) any time she runs. Two years ago I traded a gentleman in a bar in Oakland for a dress shirt."

Right: Marley's Freedom heads back to the barn after the race. Winning jockey Drayden Van Dyke said, "Bob (Baffert) told me to be sure to warm her up real good and to get her running away from there. She did and we had a good tactical spot. I was just sitting on her, but I had to get after Selcourt a little early because it looked like she was running pretty easy on the lead." 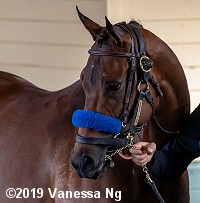 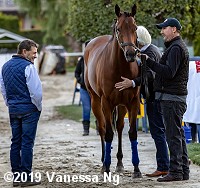 Left: Marley's Freedom in the paddock before the race. Co-owner Barbara Perry said, "It all starts with them team from the very beginning and the farm even. Everybody has worked together and Bob has just been absolutely amazing with her. She is just a completely different horse with him. She's so special and so sweet. She loves her job but she's such a love in the barn as well."

Right: Trainer Bob Baffert and assistant trainer Jimmy Barnes check out Marley's Freedom back at the barns after the race. 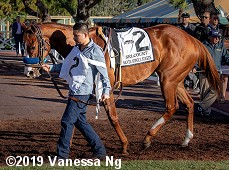 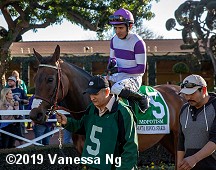 Second place finisher Selcourt in the paddock. Jockey Joe Talamo said, "She flew out of there, she broke like a shot today and we got to set our own fractions. She was very relaxed and hat's off to the winner. Man, Marley's Freedom has been able to string some really nice races together. I was really proud of my mare today though. Even when Marley's Freedom came to her, she was fighting. I thought we were going to steal it there for a second at the top of the lane."