The feature race on Saturday at Santa Anita was the $200,000 San Pasqual Stakes (G2), a 1 1/8 mile main track contest for older horses prepping for the Santa Anita Handicap (G1) scheduled for March 6. Conditions were excellent for the last Saturday of January, with sunny skies and temperatures in the mid 60's, however rain on Friday downgraded the main track to good and cancelled turf racing for the day. A short field of just 5 made final entry, with San Antonio Stakes (G2) runner-up Idol sent off as the even money choice. In to challenge him included 5-2 second choice Express Train, runner-up in the Malibu (G1) on opening day, and 7-2 third choice King Guillermo, unraced since 4th in the Cigar Mile (G1) at Aqueduct.

Jockey Drayden Van Dyke sent 5-1 fourth choice Tizamagician to the lead first time by and he set fractions of 23.84, 48.74, and 1:13.70 while pressed by 19-1 longest shot Zestful and stalked by Express Train. At the top of the lane jockey Juan Hernandez moved Express Train out 3 wide for room and he swept to the front through 1 mile in 1:39.26. Kept to task by Hernandez, Express Train drew off late to win by 3 1/4 lengths over Tizamagician in 1:52.13. It was a neck back to late-running favorite Idol third. 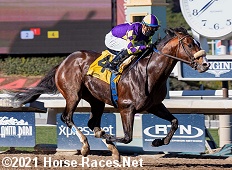 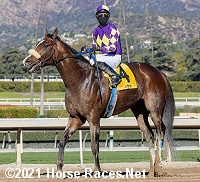 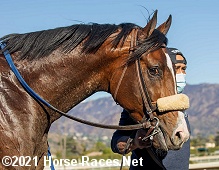 Left: Express Train in the winner's circle. Winning jockey Juan Hernandez said, "The difference was the distance (of) 1 1/8 and different horses, but he's a really nice horse. He loves going short and going long so you can do whatever you want with him, he's a really nice horse. The boss, Mr. Shirreffs, just told me to have a good trip.There were three horses that tried to go to the lead and my horse relaxed pretty well behind them. I was just waiting to (get into) the stretch to let him run, that's what (he) did. Around the turn before the stretch, I checked, I went outside and I was clear and he started running again. I want to thank the owners and the trainer for this beautiful opportunity. Thanks guys."

Right: Express Train heads back to the barn. 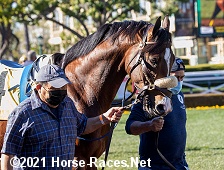 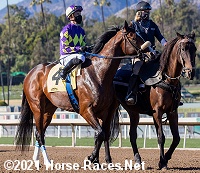 Left: Express Train in the paddock before the race. Winning trainer John Shirreffs said, "We knew there was plenty of speed in the race and it worked out fine. Juan fits this horse very well, show me a horse he doesn't fit. When you speak to him, he exudes confidence. He's a rider. We'll stay home and run in the Big Cap." 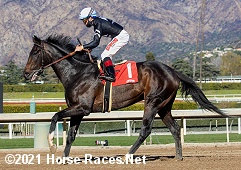 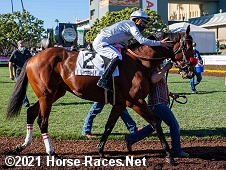 Left: Second place finisher Tizamagician returns after the race. The Richard Mandella trainee improved his record to 3 wins, 6 seconds, and 0 thirds in 14 starts, earning $219,851 for owners MyRacehorse and Spendthrift Farm.

Right: Third place finisher and beaten favorite Idol in the paddock before the race. The Richard Baltas trainee improved his record to 2 wins, 2 seconds, and 1 third in 5 starts, earning $176,464 for owner Calvin Nguyen. 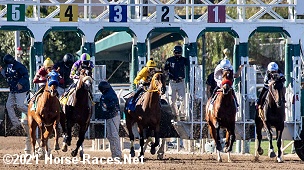 The horses break from the gate for the San Pasqual Stakes. 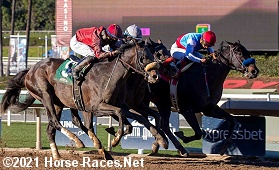 An hour after the San Pasqual, a field of 6 three-year-olds went to post for the $100,000 Robert B. Lewis Stakes (G3), a 1 1/16 mile points-scoring race in the Road to the Kentucky Derby series used to determine Derby starting spots. Medina Spirit was sent off as the even-money choice off his second place finish in the Sham Stakes (G3). In to challenge him included 5-1 second choice Hot Rod Charlie, unraced since a close second in the Breeders' Cup Juvenile (G1), and 11-2 third choice Spielberg, winner of the Los Alamitos Futurity (G2).

Jockey Abel Cedillo sent Medina Spirit to the lead first time by and he set fractions of 22.89, 46.61, and 1:12.36 while pressed by 8-1 fourth choice Wipe the Slate and stalked by 15-1 longest shot Parnelli. Turning for home, Hot Rod Charlie moved up to challenge from 4th and 11-1 Roman Centurian put in a strong late rally from 7 lengths off the pace. However, in deep stretch Medina Spirit dug in to win by a neck over Roman Centurian in 1:46.26. It was a nose back to Hot Rod Charlie third, and a long 11 lengths back to Spielberg fourth. 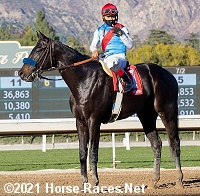 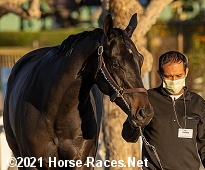 Left: Medina Spirit in the winner's circle. Winning trainer Bob Baffert said, "That reminded me a little bit of Silver Charm. He had every reason to give it up late down in the stretch (when) those horses came to him, I thought he was beat. I thought they were going to get by and he wouldn't let them by, he fought on. He really is not as tired as I thought he would be. He got caught up in the speed duel. We were afraid about the one-hole and I was hoping he could just back off a little bit. We're going to work with him and learn about the horse."

Right: Medina Spirit heads back to the barn after the race. Winning jockey Abel Cedillo said, "He's a very game horse. At the quarter pole, I didn't know, but he looked around and when he saw those horses, he kept going. He didn't get tired at all. On the gallop out, he was by himself." 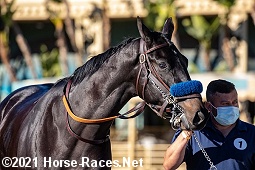 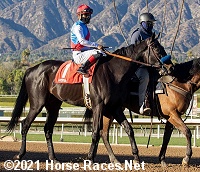 Left: Medina Spirit in the paddock before the race.

Right: Medina Spirit in the post parade. Baffert added, "A race like this gives them a good foundation, that's why I decided to run him here. I rather run him in a race and keep breezing him, getting him ready. He's going to get a lot out of this race, but I think you have to take him pretty seriously now. Those are two good horses that he beat, so I'm really fortunate. We just have to keep him healthy. It's a really tiring track, he went real fast early, but he showed that he had the qualities there. It's nice to win the Robert B. Lewis because it means so much to me. " 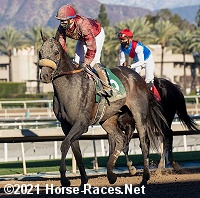 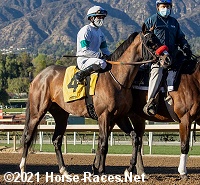 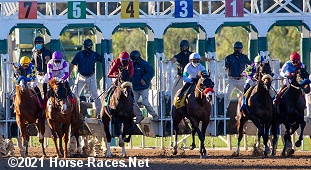 The horses break from the gate for the Robert B. Lewis Stakes with a bit of bumping going on.