The feature race at Santa Anita on Saturday was the $200,000 San Gabriel Stakes (G2) for older horses going 1 1/8 miles on the turf. Conditions were excellent in Arcadia, with sunny skies and temperatures in the high 60's. Count Again was sent off as the even-money favorite in the field of 7, winner of the Seabiscuit Handicap (G2) at Del Mar after finishing 4th in the Northern Dancer (G1) at Woodbine. In to challenge him included 11-4 second choice Anothertwistafate, winner of the Longacres Mile Handicap (G3) before finishing 4th in the Seabiscuit, and 11-2 third choice Bob and Jackie, 3rd in the City of Hope Mile (G2).

Jockey Heriberto Figueroa sent Bob and Jackie to the lead first time by and he set fractions of 23.02, 46.95, and 1:11.62 over the firm going while pressed by Anothertwistafate and stalked by 10-1 fifth choice Next Shares. Turning for home, jockey Joel Rosario sent Anothertwistafate to take over through 1 mile in 1:34.91. Kept to task by Rosario, Anothertwistafate drew off late to win by 2 1/4 lengths over pacesetter Bob and Jackie in 1:46.63. It was another 2 lengths back to Next Shares third, while favorite Count Again was slowest away, trailed the field by as many as 10 lengths, and was eased late by jockey Juan Hernandez beaten 20 1/2 lengths. 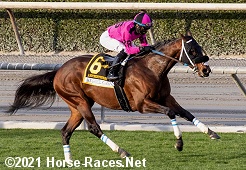 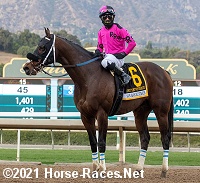 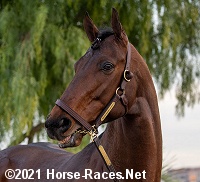 Left: Anothertwistafate in the winner's circle. Winning trainer Peter Miller said, "The first half mile, he was a little rank, then Joel got him to settle. Joel recommended the blinkers after his last race. He made the lead and was gawking around. We wanted him to have a target (today). This is my first win for Mr. Redekop. It's a nice way to do it, in a Grade 2, $200,000. We'll look at the Pegasus, both the turf and the dirt. The dirt is more money, but obviously, there's tougher horses in there."

Right: Anothertwistafate poses as he heads back to the barn. 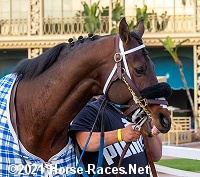 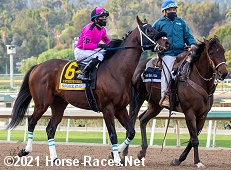 Left: Anothertwistafate in the paddock before the race. Winning jockey Joel Rosario said, "It was the first time with blinkers today and he broke really quick out of there. It looked like the other horse (Bob and Jackie) really wanted to go to the lead, so I had to just let it work out a little bit, let him sit off and he did, he was fine after I put him behind the other horse. He was good. Today having the blinkers on helped, he was more focused today. I never rode him before his last start, but he improved today." 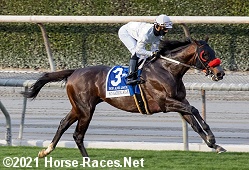 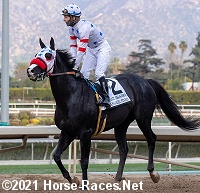 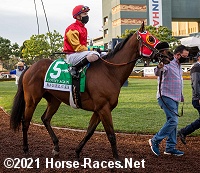 Last place finisher and beaten favorite Count Again in the paddock before the race. Trainer Phil D'Amato said, "Juan (Hernandez) said when he asked him, he didn't pursue." He has a record of 4 wins, 1 second, and 2 thirds in 9 starts, earning $271,665 for owner-breeder Sam-Son Farm and co-owner Agave Racing Stable. 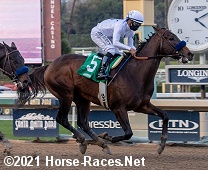 Immediately after the San Gabriel, a field of 5 three-year-olds contested the $100,000 Sham Stakes (G3) over 1 mile on the main track, worth 10 points to the winner under the Road to the Kentucky Derby. Life Is Good was sent off as the 2-5 favorite off his debut win on November 22 at Del Mar by 9 1/2 lengths. In to challenge him included 9-2 second choice Parnelli, a maiden winner at 4th asking, and 9-1 third choice Medina Spirit, a debut winner by 3 lengths at Los Alamitos on December 11.

Jockey Mike Smith sent Life Is Good to a clear lead first time by through fractions of 23.56, 46.47, and 1:10.66 over the fast main track while pressed by Medina Spirit and stalked by 29-1 longest shot Waspirant. Turning for home, Life Is Good opened up a 4 length advantage through 7f in 1:23.24. Medina Spirit closed in the final furlong but Life Is Good held him off to win by 3/4 length in 1:36.63. It was a long 13 lengths back to late-running Parnelli third. 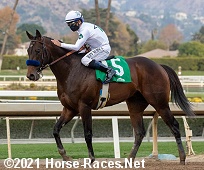 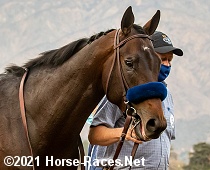 Left: Life Is Good in the winner's circle. Winning trainer Bob Baffert, who trains the first 2 finishers said, "I could tell that Mike was just cruising out there. It reminded me a lot of Authentic last year, when he did the same thing, he looked like a drunk out there coming down, he almost hit the rail and stuff. Just to get the two turns out of the way it's big."

Right: Life Is Good heads back to the barn after the race. Baffert added, "I always feel that the second race is most important, you're going up against winners. I think Mike did a great job just sort of cruising around there and it was just the kind of race we were looking for. They ran pretty fast, these are two good horses. It is so exciting he passed the two turn test." 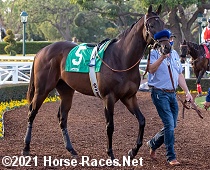 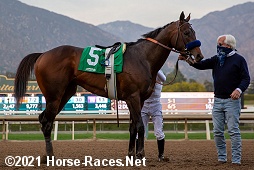 Left: Life Is Good in the paddock. Winning jockey Mike Smith said, "It was his first time around two turns. He got away just a little slow, but he got up and of course he's naturally just so quick, he was just up underneath himself. Just as we were heading toward home he was doing things all by himself so easy out there. He didn't know what he was doing going twice around, and he just got the lead and was looking out at the infield on the big screen he could see himself, and he got to looking, but I was watching as well so I saw the horse coming on the outside."

Right: Life Is Good gets unsaddled with trainer Bob Baffert. Smith added, "I didn't want to panic, I just showed it to him a little bit. What I liked really was after the race, when I stood up and the horse got next to me he jumped back in the bridle and I mean I had to pull him up. He's just very, very talented. We don't know yet how talented. We haven't gotten close yet." 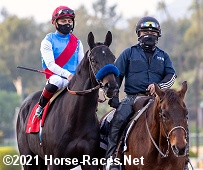 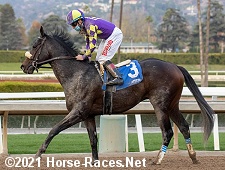 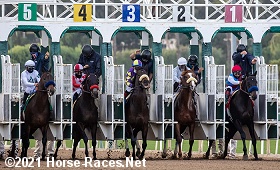 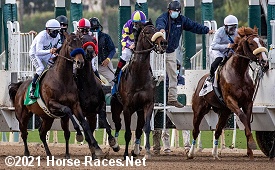 The horses break from the gate for the Sham (left) and quickly turn things into a bumping contest (right). Uncle Boogie (red shadow roll) was bumped from both sides at the start and was never a factor.