The feature race on Saturday at Monmouth Park was the $160,000 Salvator Mile (G3) for older horses going 1 mile around two turns on the main track. Conditions were unusually cool for the Jersey Shore in mid June, with overcast skies and temperatures in the mid 60's. 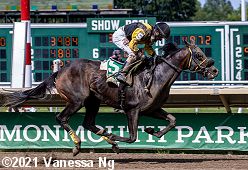 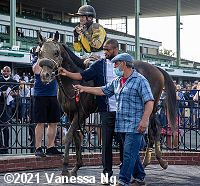 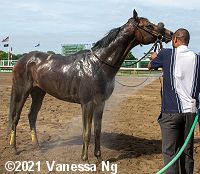 Left: Informative in the winner's circle. Winning trainer Uriah St. Lewis said, "I expected this because this horse has been training so good. The last race he ran at Pimlico (second in a $35,000 optional claimer on May 15) he got blocked, checked and stopped and ran a huge number. I said to myself 'If he can run that number again he can win' – and he did. We were not intimidated by this field. That's why we entered him. We thought he could win it. He has been close in a lot of his races and a mile (the horse was 0-for-19 at the distance) is right up his alley."

Right: Informative gets hosed off after the race. Winning jockey Jose Ferrer said, "We were in last place in the backside yes, but I saw everything happening in front of me. I had a lot of horse underneath. I've ridden horses like this before that looked like they were hopeless and they just pick it up for you." 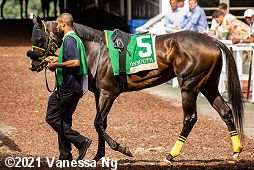 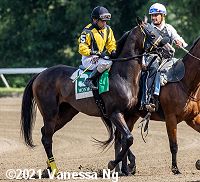 Left: Informative in the paddock. St. Lewis added, "When they went down the backside I thought I had no chance. But when we got to the top of the stretch and everything opened for him I said 'Our lucky day is coming.' All he had to do was finish strong and he finished strong. This feels good. I like that price, $161.60 to win. Everyone is happy."

Right: Informative in the post parade. Ferrer added, "Everything opened up for me in the stretch. It was wide open to come through. I knew I had saved ground coming into the lane and I was thinking let's see what this horse has now. Then I saw Paco Lopez (aboard Ny Traffic) drifting out and I said 'Man. I'm going to get him. I'm going to win this race.' The horse can't read the board so he didn't know (his odds). I've always said you don't have a chance if you stay in the jockeys' room and this is proof of that." 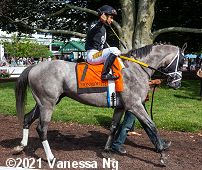 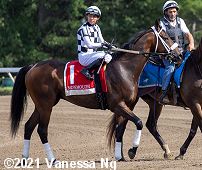 The horses break from the gate for the Salvatore Mile. 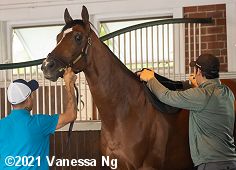 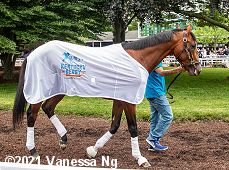 Mandaloun, second place finisher in the Kentucky Derby, schooled in the paddock during the sixth race in preparation for the Pegasus Stakes on Sunday.