The $750,000 Santa Anita Handicap (G1) is one of the premier races on the west coast, featuring top older horses going 1 1/4 miles on the main track in Arcadia, California. It was a picture perfect afternoon, with 26,901 fans at Santa Anita Park enjoying sunny skies and temperatures in the low 80's. 2011 winner Game On Dude was sent off as the 6-5 choice in the field of 9 exiting wins in the Native Diver (G3) and San Antonio (G2). In to challenge him was last year's winner Ron the Greek at 5-2, runaway winner of the Sunshine Millions Classic last out. 4-1 Called to Serve, winner of the Discovery Handicap (G3) and Broad Brush Stakes was the third choice. This was the first time that the last two winners of the "Big Cap" met up for a rubber match.

Jockey Mike Smith sent Game On Dude to the rail and to the lead immediately, and he set fractions of 23.64, 47.19, and 1:10.97 over the fast track while about 2 1/2 lengths in front of 30-1 Handsome Mike tracking him in second. Entering the stretch, Handsome Mike tired as 27-1 Clubhouse Ride moved up to take second, but Game On Dude was already drawing away. After a mile in 1:35.24, Game On Dude cruised to a stakes record 7 3/4 length margin of victory in 2:00.14. Clubhouse Ride held off late-running Called to Serve by a nose for second, while Ron the Greek was another 1 1/2 lengths back in third. 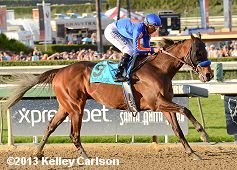 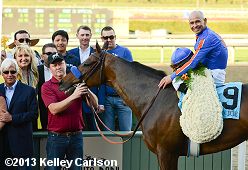 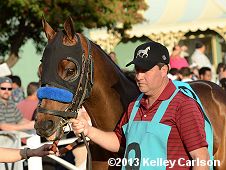 Left: Game On Dude in the winner's circle with trainer Bob Baffert on the left. Baffert said, "He's always been able to go 1 1/4. I think Mike really gets along with him well. He must have given him a breather along there somewhere, but the thing about ‘Dude,' he's got to go along at a fast clip. Mike didn't see anybody going, so he just took the lead. He was going to cruise right along there (anyway). If you go with him, you're not going to get anything. He likes competition, and he was still going pretty fast." Baffert may send him next to the Charles Town Classic. "It's a million (dollars) to the winner and we know he likes that track (second in 2011)."

Right: Game On Dude in the paddock. Jockey Mike Smith said, "He knocked it out of the park today, he really did, it was extremely impressive. He broke really well today. I basically waited a little to see what Handsome Mike was going to do (out of the gate) and when I saw that I had the jump on him, the advantage, I got on over as quick as I could just to impede him a little bit without bothering him in any way, and it worked out really well. He got into this great rhythm he has, he's got a real high cruising speed. He's learned how to breathe, he really has. If you sit real still on him, when he is switching leads, you can feel him do it. He takes in a whole lot of air, and once he does that, I feel like I'm loaded again, like I could do whatever I want at that point. He sometimes does it on the backstretch, sometimes on the turn. Today, it was on the turn. Whenever he saw horses run up on him, and get within a length of him, right in there he did it." 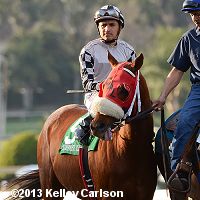 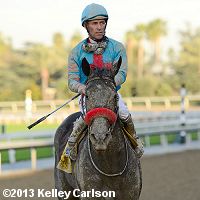 Left: Second place finisher Clubhouse Ride in the post parade. Jockey Rafael Bejarano said, "I had a good ride. I knew the favorite was going to be in the lead. My horse, he ran really, really strong at the end and he deserved to finish second."

Right: Third place finisher Called to Serve returns after the race. Jockey Gary Stevens said, "There was no beating (Game On Dude). I should have been an easy second. We got in tight at the 3/8 pole and he doesn't like it down inside. When I got him out, he re-broke for me. It took him a while to get his momentum going again. I'm disappointed we didn't finish second; I know (trainer) Nick (Canani) is too. The horse needs to be on the outside and I flat couldn't get him there until it was too late."


The co-feature on Saturday was the $300,000 Frank E. Kilroe Mile (G1) for older horses going 1 mile on the turf. Arcadia (G2) winner Suggestive Boy was sent off as the 3-2 favorite in the field of 8 over 5-2 Mr. Commons, unraced since fifth in the Breeders' Cup Mile (G1), and 5-1 third choice Silentio, second in the Arcadia after winning the Sir Beaufort (G2). 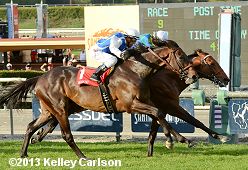 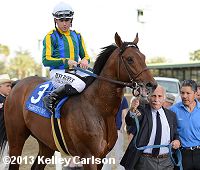 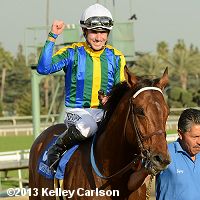 Left: Suggestive Boy in the winner's circle. Trainer Ron McAnally, celebrating his 700th career win at Santa Anita, said, "I've always liked Santa Anita. This and Del Mar are the 2 best tracks in the world. We've always felt that he was a good horse. When he ran first time out in the Grade 1 Shoemaker Mile, I didn't want to run him there, because you take one step at a time. Winning the Kilroe Mile, Jimmy (Kilroe) was a part of Santa Anita. That's very, very important. Jimmy always did a lot for me and hopefully I did a lot for him. He was the best. As a rule, he likes a good pace up front because he has good turn of foot turning for home. Turning for home today I really thought we had a good chance because he was in the clear and that's all it takes."

Right: Jockey Joe Talamo celebrates as Suggestive Boy heads to the winner's circle. Talamo said, "I've always wanted to win a big stake for Mr. McAnally. He did an unbelievable job with this horse, he's very fresh today, and I just had to point him in the right direction. (Silentio) was coming at me and I had to get after (Suggestive Boy) But you know, this horse is such a fighter, and he kept giving me more and more." 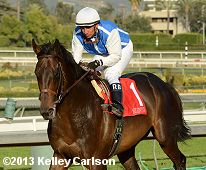 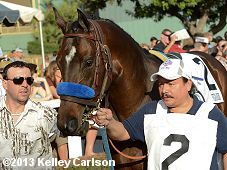 Left: Second place finisher Silentio returns after the race. Trainer Gary Mandella said, "It's going to take a hell of a horse to beat Suggestive Boy. If he stays that good all year, him and Wise Dan are probably the best turf milers around. At the 1/8 pole, I thought my horse was just kind of lengthening his stride, and maybe we'd get lucky and Joe would move too early. But watching these horses gallop out, in another 1/16, I still don't think my horse is going to get by."

Right: Third place finisher Fed Biz in the paddock. Jockey Mike Smith said, "He ran a very good race. He ran the kind of race that gives you some hope for the future on the grass. I just like the way he handled it. Those were some of the best milers in the country and he only beat me by 1 1/2, 2 lengths max. I kind of had to wait for room. I never had a clear, clear sailing, so room to improve."


The $250,000 Las Virgenes Stakes (G1) features 3-year-old fillies going 1 mile on the main track, and is worth 50 points to the winner in the Road to the Kentucky Oaks. Breeders' Cup Juvenile Fillies (G1) winner Beholder was sent off as the 4-5 favorite in the field of 8 off a second place finish in the Santa Ynez (G2). In to challenge her included 9-5 second choice Fiftyshadesofhay, winner of the Santa Ysabel (G3), and 13-1 third choice Scarlet Strike, third in the Santa Ysabel.

Jockey Garrett Gomez sent Beholder to the lead immediately and she set fractions of 23.78, 47.55, and 1:11.19 while about 2 lengths in front of Fiftyshadesofhay. In the stretch, Beholder began to extend her lead, finishing up 3 3/4 lengths clear in 1:36.14. It was another 1 1/2 lengths back to late-running Scarlet Strike third. 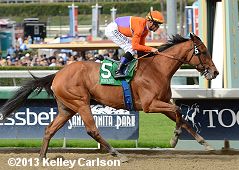 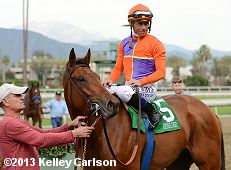 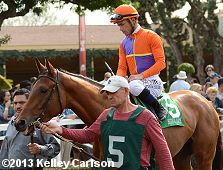 Left: Beholder in the winner's circle. Trainer Richard Mandella said, "When you've got one this good it's just a relief to get the job done. You hope you don't mess it up. She's very fast. To take her back and fight her wouldn't make any sense. Sprinting, when they go a half in 43, it's easy. But she needed to be where she was. Everything she did today was great. She's a great filly. We'll enjoy this today, but plans are for her to run next in the Santa Anita Oaks."

Right: Beholder in the paddock. Jockey Garrett Gomez said, "I was really surprised when she didn't run as well (in the Santa Ynez). But, there was an explanation (an ulcer was found in her throat after that race). Richard didn't want to use that as the main excuse but there was a little question mark there from the performance. It wasn't a horrible performance, but it wasn't what we expected. It was a whole different feeling today. She did everything beautiful, she traveled beautifully, when I asked her to quicken, she quickened. She's back!" 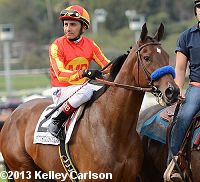 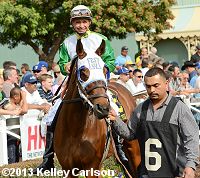 Left: Second place finishere Fiftyshadesofhay returns after the race. Jockey Rafael Bejarano said, "I tried to go to the lead, but the favorite just had so much speed. I just tried to keep my position because I knew she was going to take off in the stretch. She's a nice horse, and I did the best I could. She was too fast. As soon as we got into the stretch, (Beholder) took off really fast. She showed a good kick, my horse was still running, but it was not enough."

Right: Third place finisher Scarlet Strike in the paddock. Jockey Mike Smith said, "I had a great trip. No excuses. I was hoping for a little more pace up front, but other than that, she ran extremely well." 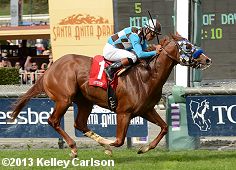 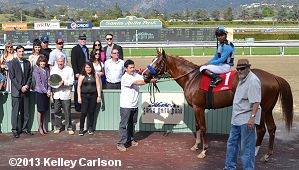 Kicking off the stakes action on Saturday was the $75,000 Baffle Stakes for three-year-olds sprinting 6 1/2 furlongs on the downhill turf course. 9-2 third choice Rosengold and jockey Martin Garcia battled for the lead with 12-1 Native Treasure and 12-1 Will True Up through fractions of 22.05 and 44.20, then opened up 2 1/2 length lead in mid-stretch. Will True Up attempted to close but Rosengold held him off by 1 length in 1:12.20. It was another 1 1/4 length back to 11-1 Horizon Sky third, while 5-2 favorite Procurement was fifth.