The major California prep race for the Triple Crown is the $750,000 Runhappy Santa Anita Derby (G1) for 3-year-olds going 1 1/8 miles over the Santa Anita main track just 4 weeks before the Run for the Roses, and worth 100 points to the winner as part of the Kentucky Derby Championship Series. Conditions were excellent for the 26,376 fans in attendance at the historic Arcadia oval, with sunny skies and temperatures in the high 80's. A field of just six went to post with Forbidden Kingdom sent off as the even-money choice off wins in the San Vicente (G2) and San Felipe (G2). In to challenge him 6-5 second choice Messier, winner of the Robert B. Lewis (G3) by 15 lengths, and 4-1 third choice Taiba off his 7 1/2 length debut win on March 5. Messier and Taiba were formerly trained by the now-suspended Bob Baffert and are making their first starts for new trainer Tim Yakteen, thus making them eligible to earn Derby points (and run in the Derby if qualified).

Jockey Juan Hernandez sent Forbidden Kingdom to the lead first time by and he set fractions of 23.23, 46.66, and 1:10.93 while pressed by Messier and stalked by Taiba. Turing for home Forbidden Kingdom tired badly as Messier easily inherited the lead through 1 mile in 1:36.97. However, Taiba, confidently ridden by Mike Smith and wide throughout, rallied by at the 1/16 pole to win by 2 1/4 lengths in 1:48.67. It was a long 10 lengths back to 27-1 Happy Jack third, while favorite Forbidden Kingdom checked in last beaten 14 1/2 lengths. 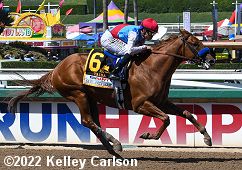 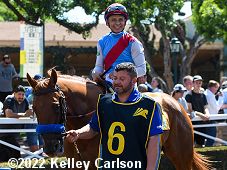 Left: Taiba in the winner's circle. Winning trainer Tim Yakteen (who trains the first 2 as well as 4th place finisher Armagnac) said, "You could have poured me out of a shot glass earlier, but these two horses represented me unbelievably in this race and I'm just absolutely thrilled, floored with the effort that Taiba put forth. That was a sensational race, he's just a super horse. I had three great riders, two Hall Of Famers, you don't need to tell them anything."

Right: Taiba in the paddock. Winning jockey Mike Smith said, "When one comes along like that, he showed he was really good.  He didn't really get away very well.  In the first turn, I didn't want to get in the way.  I wasn't in any hurry.  I felt the others would do the dirty work for me and it set up just fine.  He showed just how special he is.  He belongs with anyone. He just recovers really well.  I'm not getting any younger.  As I get older, I have felt that something special is going to happen.  This just may lead to that.  The sky's the limit." 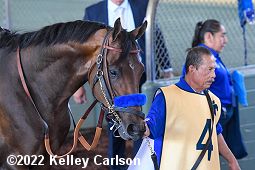 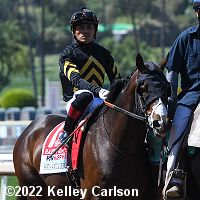 Left: Second place finisher Messier in the paddock before the race. Jockey John Velazquez said, "We didn't get the result we wanted, and there wasn't much I could do to get him up there. Mike was ahead and did the work." 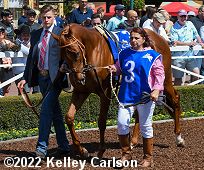 Last place finisher and beaten favorite Forbidden Kingdom in the paddock. The Richard Mandella trainee has a record of 3 wins, 1 second, and 1 third in 6 starts, earning $434,500 for owners MyRacehorse and Spendthrift Farm. After the race it was announced he has an epiglottis issue and will skip the Kentucky Derby. 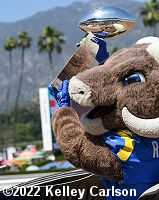 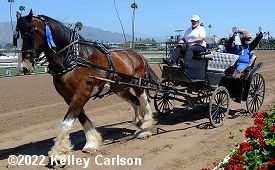 The Los Angeles Rams mascot was at Santa Anita to show off this year's Super Bowl trophy for the fans. Prior to the races, representatives of the Los Angeles Rams were on-hand to meet fans as part of the Rams Super Bowl Championship Lombardi Trophy Fan Experience near the Kingsbury Fountain in the West Paddock. 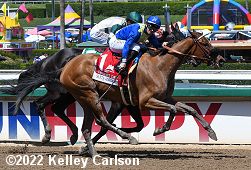 The $400,000 Santa Anita Oaks (G1) featured a short field of five 3-year-old fillies going 1 1/16 miles with the winner earning 100 points as part of the Kentucky Oaks Championship Series. Las Virgenes Stakes (G3) winner Adare Manor was sent off as the 7-10 favorite over two fillies at 7-2, Ain't Easy, winner of the Chandelier (G1) before finishing 3rd in the Santa Ysabel (G3), and Under the Stars, winner of the Santa Ynez (G2) before finishing second in the Santa Ysabel. Adare Manor and Under the Stars were formerly trained by the now-suspended Bob Baffert and are making their first starts for new trainer Tim Yakteen, thus making them eligible to earn Oaks points (and run in the Oaks if qualified). 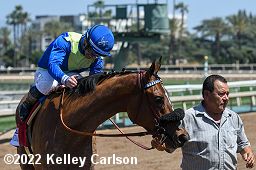 Left: Desert Dawn in the winner's circle. Winning trainer Phil D'Amato said, "She's an honest filly. I always thought once she'd get her scenario It'd work out for her, and I think the longer the better. Umberto's been breezing her and her last drill was probably her best drill to date, so it all worked out."

Right: Desert Dawn returns after the race. Winning jockey Umberto Rispoli said, "I have been working this horse.  I knew this filly was better than that last year.  I knew we needed that last race and I felt the last work was better than shown.  I just wanted to keep her outside and I knew the pace would set up really well for her.  We started to move at the 3/8th pole and she fought every step of the way.  She gave me the Santa Anita Oaks and now it is on to Kentucky!" 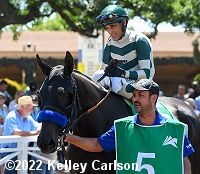 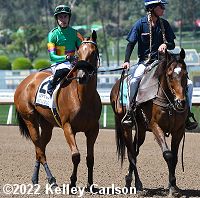 Left: Second place finisher and beaten favorite Adare Manor in the paddock before the race. Jockey John Velazquez said, "We are obviously disappointed in the result. She just didn't run her A-race. She broke slowly and was in a good position in the back stretch. But she just didn't run the way she usually does." 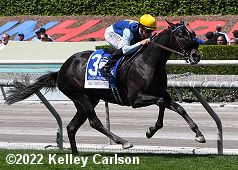 The $100,000 Providencia Stakes (G3) presented by the Thoroughbred Aftercare Alliance featured a field of six 3-year-old fillies going 1 1/8 miles on the turf. China Doll Stakes winner Lucky Girl was sent off as the 2-1 favorite over 5-2 second choice Sterling Crest, third in the China Doll, and 3-1 third choice Cairo Memories, 7th in the Santa Ysabel (G3) after just missing in the Starlet (G1).

Jockey Mike Smith sent Cairo Memories to the lead first time by through fractions of 24.08, 48.31, and 1:11.72 while pressed by Sterling Crest and stalked by Lucky Girl. Into the lane Cairo Memories opened up on the field through 1 mile in 1:35.61, and cruised to a 4 1/2 length win over Sterling Crest in 1:47.33. It was another 1 3/4 lengths back to 22-1 longest shot Gold Dragon Queen third, while Lucky Girl tired late to check in 5th beaten 9 lengths. 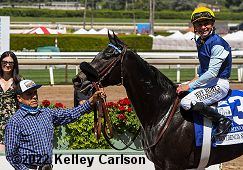 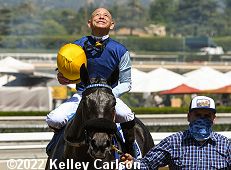 Left: Cairo Memories in the winner's circle. Winning trainer Robert Hess Jr. said, "She couldn't get a hold of the dirt and she's dropped too far back. On turf, as soon as she gets a hold of it, she's much much better, and at a mile and an eighth, I think everyone took back and she found herself out there. She had fun out there too. I think great horses make great jockeys look even better, so I think that's what we might have here."

Right: Mike Smith celebrates aboard Cairo Memories after the race. Winning jockey Mike smith said, "I wanted to go right to the front, but she didn't break good.  Once she got going, she showed how aggressive she can be and got a good enough break to get the lead.  I knew she was better than that last race.  She got so much dirt thrown in her face, she didn't want to run.  I think she is a different horse on the grass and she showed it today." 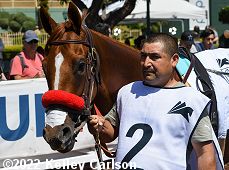 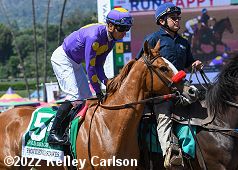 Left: Second place finisher Sterling Crest in the paddock. Jockey Umberto Rispoli said, "She ran a pretty aggressive race. I had to relax her a bit. Mike in the front had control of the race and was pretty much coasting. I think she would do better in a mile race instead of a mile and one eighth." 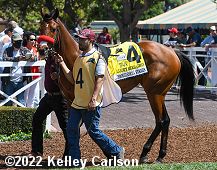 Fifth place finisher and beaten favorite Lucky Girl in the paddock. The Richard Baltas trainee has a record of 2 wins, 0 seconds, and 1 third in 7 starts, earning $115,663 for owner Panic Stable 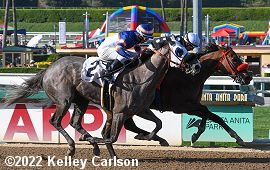 Closing out the Saturday stakes septet was the $150,000 Evening Jewel Stakes featuring a field of 9 California bred or sired 3-year-old fillies sprinting 6 1/2 furlongs on the main track. Connie Swingle was sent off as the 8-5 favorite over 5-2 second choice Big Novel and 9-2 third choice Professors' Pride.

Jockey Ricardo Gonzalez sent 77-1 longest shot Power Surge to the lead out of the chute and she set fractions of 21.82 and 44.51 while pressed by 9-1 Everlys Girl and stalked by favorite Connie Swingle. In the stretch Power Surge continued to lead through 3/4 in 1:10.03. Connie Swingle moved up to challenge her but Power Surge held her off by a head for the huge upset in 1:16.87. It was a long 7 1/2 lengths back to late-running Big Novel third.

Power Surge in the winner's circle. Mark Rheinford, assistant to winning trainer Blaine Wright said, "Blaine believed in her.  He said she got in a lot of trouble and never really got a chance in her last race up north.  She really responded today.  She came down here on Wednesday and I got to gallop her and school her and she was ready to go." Winning jockey Ricardo Gonzalez said, "She was so game. As soon as the other horse got next to her, she pinned her ears and tried so hard all the way down the lane."