The major California prep race for the Triple Crown is the $750,000 Santa Anita Derby (G1) for 3-year-olds going 1 1/8 miles over the Santa Anita main track just 4 weeks before the Run for the Roses, and worth 100 Road to the Kentucky Derby points. Conditions were excellent at the historic Arcadia oval, with 33,005 fans enjoying sunny skies and temperatures in the low 70's. A field of 8 went to post on Saturday, with Robert Lewis (G2) winner and San Felipe (G2) runner-up Flashback sent off as the 11-10 favorite. In to challenge him included 9-2 second choice Super Ninety Nine, winner of the Southwest (G3) before fifth in the Rebel (G2), and 5-1 third choice Tiz a Minister, third in the San Felipe last out.

Jockey Martin Garcia sent Super Ninety Nine to the lead first time by and he set fractions of 22.72, 46.48, and 1:10.47 while pressed by 13-2 fifth choice Goldencents to his outside. Entering the lane, Super Ninety Nine tired allowing Goldencents to inherit the lead through 1 mile in 1:35.72. Flashback, fifth early, came through between horses for his rally but was left with too much ground to recover as Goldencents cruised past the post 1 1/4 lengths in front in 1:48.76 over the fast track. It was a long 8 1/2 lengths back to Super Ninety Nine third.

Co-owner Glen Sorgenstein said, "It's awesome. I came out here as a little kid, my dad brought me out here 20 times to the Santa Anita Derby and I never thought I would win it. He's looking from above. Thank you so much!" 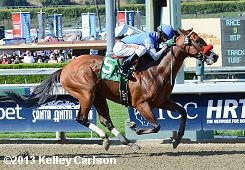 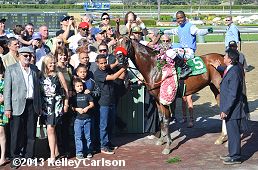 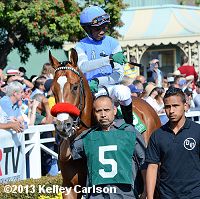 Left: Goldencents in the winner's circle. Jockey Kevin Krigger said, "I just took my hands off his neck to keep him relaxed and he stayed relaxed down the backstretch. He pulled a little bit but I didn't want him to get closer than a half length, I didn't want to get in a dog fight. He stayed relaxed and when we went into the far turn I said 'Let's go!' and he said 'How far?' and he kept running. It's going to mean everything to me, to be able to go to the Derby, to be able to make a run for the Roses, every jock dreams about this. I have never sat on any other three-year-old that makes me feel the way he does. He's fast, he does it easy, and he relaxes for me."

Right: Goldencents in the walking ring before the race. Trainer Doug O'Neill said, "These are the races you want to be a part of. Knock on wood, this horse has been such a cool horse. He's got a great combination of speed and stamina, and such a great mind on him too. I don't think those big crowds and all the people at the Derby will be a factor for him, so I'm pumped. With the 1 1/4 miles coming up, you have to have tactical speed, which he does. And, you have to have a real strong head on his shoulders, which he does but the biggest key to these races is to stay injury free. These races can tax a horse so I think if he can stay injury free, he's got a good chance to win it." 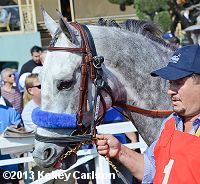 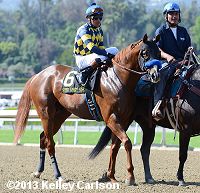 Left: Second place finisher and beaten favorite Flashback in the paddock. Jockey Garrett Gomez said, "At about the middle of the turn I was able to edge my way out and I thought I was just going to run by them. He actually just didn't pick up the way I was expecting him to and I had to start grinding on him a little bit. He picked up, just not enough. When I turned for home Goldencents quickened just a little bit and I couldn't go with him. Late in the race my horse never threw the towel in, he kept grinding away."

Right: Third place finisher Super Ninety Nine in the post parade. Trainer Bob Baffert (who also trains Flashback) said, "We were all in a good position turning for home. When we got to the outside (Goldencents) just quickened on him. The winner ran a really good race. They ran pretty fast times. Super Ninety Nine was in a good spot. He probably doesn't want to go that far. Flashback, he ran a good race. Goldencents, he's a good horse. He's going to be really tough. We're going to wait and see how (Flashback) comes out of it. He was still running at the end. He's still a young horse and we'll wait for the dust to settle. He had every chance to win today and couldn't get to that horse." 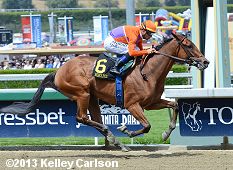 The $300,000 Santa Anita Oaks (G1) featured a field of six 3-year-old fillies going 1 1/16 miles with the winner earning 100 Road to the Kentucky Oaks points. Breeders' Cup Juvenile Fillies (G1) and Las Virgenes (G1) winner Beholder was sent off as the 3-10 favorite over 7-2 second choice Fiftyshadesofhay, winner of the Santa Ysabel (G3) before second in the Las Virgenes, and 9-1 third choice Spellbound, winner of two straight and making her stakes debut. 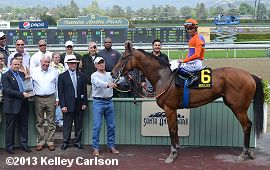 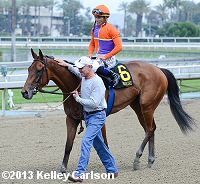 Left: Beholder in the winner's circle. Owner B. Wayne Hughes said, "I thought she ran her usual race. She went to the front. I think the Kentucky Oaks might be tougher than the Derby this year. We're looking forward to the Oaks. We can't go to the Derby. They don't let us in anymore." Trainer Richard Mandella added, "You expect (a result like this), but with horse racing, you don't want to expect it too much. It'll break your heart. She just did everything right, handled herself well; she's a very good filly. I didn't even notice (the fractions), I was very happy with everything. The Kentucky Oaks is what we'll look at. She's got the heart of a warrior."

Right: Beholder in the post parade. Jockey Garrett Gomez said, "She left the gate like a shot. I went ahead and made the decision to clear most of them. I gave (the field) a jump or two to see what they were going to do, and it looked like no one really wanted to go so I went ahead and crossed over, and was going to dictate it from there. I knew she was going to have to work a little harder today, just from the simple fact that Baffert let my horse get an easy lead in the Las Virgenes. I knew (Fiftyshadesofhay) would be up on top of me somewhere along the way today, which she was, early. She kind of tried to keep up with me today so I think that probably cost her from running on." 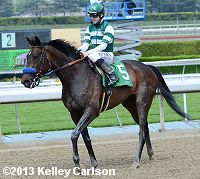 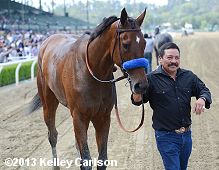 Left: Second place finisher Iotapa returns after the race. The 16-1 outsider raced in 4th early under jockey Joe Talamo, then rallied to get second beaten 2 3/4 lengths. the John Sadler trainee improved her record to 2 wins and a second in 3 starts, earning $112,200 for owner Hronis Racing LLC.

Right: Third place finisher Fiftyshadesofhay heads back to the barn after the race. Jockey Rafael Bejarano said, "(Beholder) was much the best today. I tried to keep my position but I just couldn't catch the winner. My horse came running at the end but it wasn't enough." 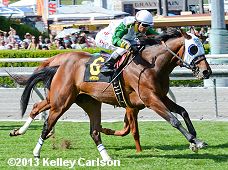 The $150,000 Providencia Stakes (G3) featured three-year-old fillies going 1 1/8 miles on the turf. Scarlet Strike was the 2-1 favorite in the field of 10 off third place finishes in the Santa Ysabel (G3) and Las Virgenes (G1). In to challenge her included 4-1 second choice Birdlover, off her win in the China Doll Stakes, and 6-1 third choice Flashy Ways, fourth in the China Doll after a close third in the Miesque (G3). 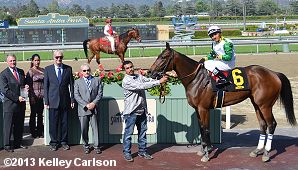 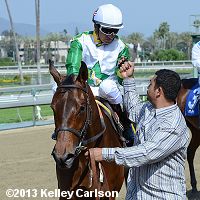 Left: Scarlet Strike in the winner's circle. Trainer Jerry Hollendorfer said, "A terrific race for this filly. I'm very proud of her. Rafael has a real knack for being in the right place at the right time and I think that's the reason why he's doing so well. We have a very good rapport with him and his agent. You couldn't get a better ride than that."

Right: Scarlet Strike returns after the race. Jockey Rafael Bejarano said, "I had to move a little early because the position I was in was going to make it a little hard to win. At the 3/8 pole I found my position right behind the leader so I just followed her and kept on running. I still had a lot of horse, and I knew I did, so that's why I moved a little early to find a better position." 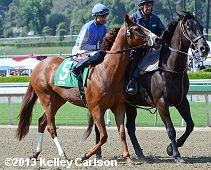 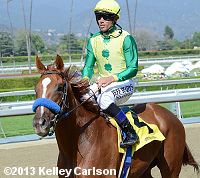 Left: Second place finisher Birdlover in the post parade. Leandro Mora, assistant to trainer Doug O'Neill said, "I was screaming up there. That was the perfect trip, we just got beat by one of the best ones. No regrets here. She's starting to adapt to these distances much better, it's easier, less pressure on her. She will be better at the longer distances, she's not a big filly, but she loves to run." 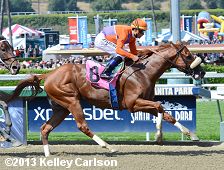 The $150,000 Potrero Grande Stakes (G2) featured a field of six older horses sprinting 6 1/2 furlongs on the main track. Malibu (G1) winner Jimmy Creed was sent off as the 6-5 favorite over 2-1 second choice Comma to the Top, winner of the Tom Fool Handicap (G3), and 7-2 third choice Unbridled's Note, runner-up in the Breeders' Cup Turf Sprint (G1) and winner of the Hernandez Handicap last out. 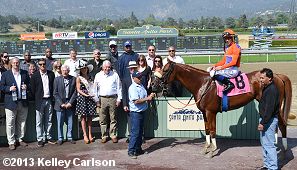 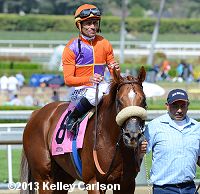 Left: Jimmy Creed in the winner's circle. Owner B. Wayne Hughes said, "The race went exactly as expected, the horse is a good horse, and I think we're going to try the Met Mile." Trainer Richard Mandella added, "He had a perfect trip. He had a great post on the outside this time and he broke good. It looked like it was meant to be. The Churchill Downs Stakes is another possibility. He missed the Strub due to a cough so we pointed to this and we'll see if it can carry us to the Met Mile."

Right: Jimmy Creed returns after the race. Jockey Garrett Gomez said, "I was able to set the bit up in his mouth and he traveled well all the way around. He actually made the lead earlier I wanted but when I told him 'let's go' he put his head down and his ears down and did what he was supposed to do. I actually had the race in my hands the whole time, it was an easier race. He can get lazy when he makes the lead so I have to keep him focused. Even today, when he saw the cameras as we crossed the finish he shied away from them a bit. He's a young horse, and he's only getting better, he has a bright future." 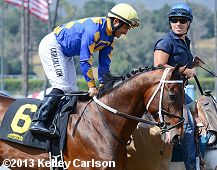 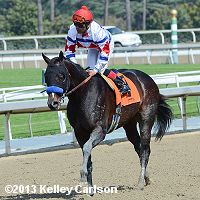 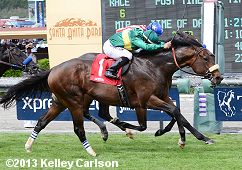 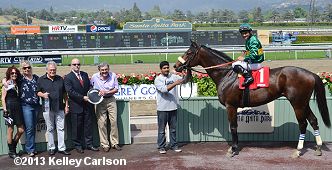 The John Shirreffs trainee improved his record to 2 wins, 3 seconds, and 1 third in 7 starts, earning $143,220 for owner Woodford Racing LLC.