Santa Anita's main dirt track has been closed since Tuesday, March 5, and the training track is only open for gallops, which led several trainers to ship horses to Los Alamitos to get in timed works. The main track at Santa Anita is scheduled to reopen for joggers and gallopers on Monday. Santa Anita's main track is expected to reopen to horses breezing for the purpose of receiving official workout times in the coming days. Pending further testing and analysis of morning training, Santa Anita is expected to reopen for racing in the coming weeks.

"Over the past four days, we've been able to do a great deal in terms of amending the soil and inspecting it," said California-based trackman Dennis Moore, who has been charged with heading a group of track maintenance personnel that includes third-party experts investigating Santa Anita's main track. Moore, who has 46 years of experience maintaining tracks in California and around the world, has been conducting extensive visual inspections of the one mile oval, as well as analyzing soil samples and test data generated by Dr. Mick Peterson, a third party consultant who serves as the director of the University of Kentucky's Agricultural Equine Program and is a professor of Biosystems and Agricultural Engineering.

Peterson's primary focus has been conducting testing that simulates the force and speed generated by the leading forelimb of a Thoroughbred running at full speed. Utilizing what's called an Orono Biomechanical Surface Tester, Peterson has gathered data that quantifies firmness, cushioning, grip and consistency from locations throughout the one mile surface. "We've reviewed Mick's research and it clearly indicates our cushion is right where it needs to be," said Moore. "We also acknowledge that things can happen even under perfect circumstances, but from everything we've been able to learn, this track is in outstanding condition and it's ready for training."

Santa Anita's one mile main track will reopen for limited training Monday morning at 5am. Training will be restricted to joggers and gallopers on Monday with 3 renovation breaks scheduled from 6am. to 6:30am, from 7:15am to 7:45am, and from 8:30am to 9am. "Over the past four days, we've been able to do a great deal in terms of amending the soil and inspecting it," said California-based trackman Dennis Moore, who has been charged with heading a group of track maintenance personnel that includes third-party experts investigating Santa Anita's main track. This group also includes representatives of the California Horse Racing Board.

"I think the most important thing with this track right now is that we closely monitor compaction levels," said Moore. "With all the rain, and this is the case in any wet winter, the 'fines,' silt and sand, can change very quickly and that affects the clays as well. Compaction, as well as dilution, of silt and sand, are all factors in the overall composition of the soil. More specifically, it's been very helpful that we have not had any significant rain since this past Wednesday. We've been able to harrow, roto-till and aerate the soil throughout each day in order to get a uniform track profile and that's helped Mick in his efforts. With all of this, the objective is to get the ideal composition throughout our six inch cushion." 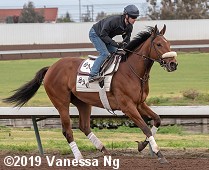 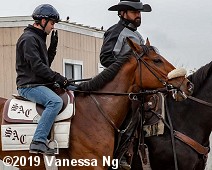 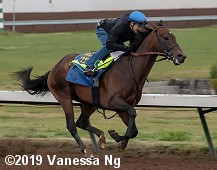 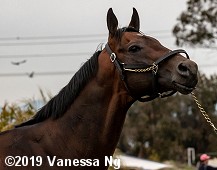 McKinzie worked out Sunday going 6 furlongs in 1:11.80. The Malibu (G1) winner finished second in the San Pasqual (G2) last out, and trainer Bob Baffert did not announce his next start. 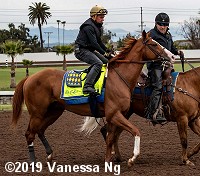 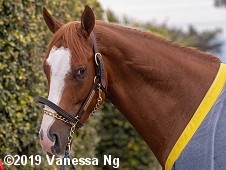 Improbable worked out Sunday going 5 furlongs in 59.20. Trainer Bob Baffert said, "Improbable went out there, he left the half-mile pole, and we just let him run a little bit there. I want to sharpen him up. He couldn't have looked any better today. He was all full of himself, and he went around there like it was nothing. The Los Alamitos track was just perfect. He bounced over it. He loves this place. His best race has been here, and he got over it really well. I couldn't be happier. He looked strong the whole way, and he didn't want to pull up, he was really enjoying himself. That's what you want to see. You want to see horses that look healthy and are enjoying themselves and what they're doing." His next start should be the Rebel Stakes at Oaklawn. 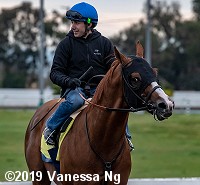 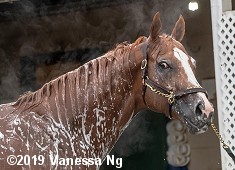 Dabster worked Sunday in company with Ike going 6 furlongs in 1:10.60, fastest of the day. He will go next in the Dubai World Cup. 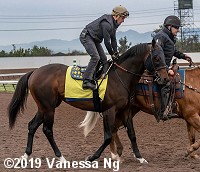 Ike worked 6 furlongs on Sunday in company with Dabster going 1:10.60, fastest of the day. Trainer Bob Baffert said, "Everything went really smooth, and Los Alamitos couldn't have been kinder. They opened their doors to us, and the track was in pristine shape. The horses were loving it." 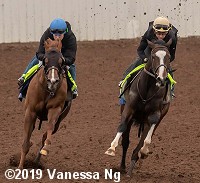 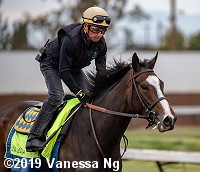 Flor de La Mar (inside) worked on Sunday in company with Mucho Gusto going 5 furlongs in 57.80, second fastest of the day. The 3-year-old filly won her debut on January 20 but disappointed in 5th in her last start in an allowance on March 2, both at Santa Anita. 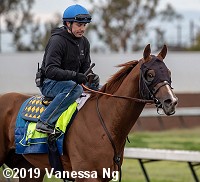 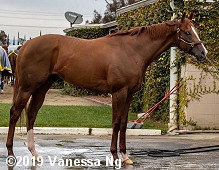 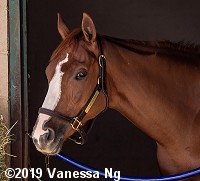 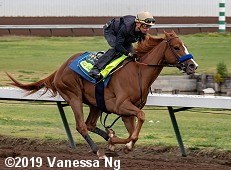 Chasing Yesterday worked Sunday. Trainer Bob Baffert said, "I'm not sure where she's going to run yet. We're still trying to figure things out for them, but at least this week we've got that covered." 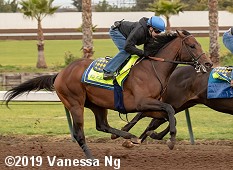 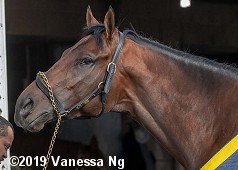 Game Winner worked 5 furlongs in company with Dr. Dorr in 59.80 on Sunday. Trainer Bob Baffert said, "I always work Game Winner with company because it keeps him focused. If he's by himself, he loses focus. He's a different kind of horse. He likes competition and to go with somebody. He just cruised. He actually went about 3/4 in 1:13, but on the bridle. We didn't let him do too much. One thing about him is that he can run all day. I'm not worried about him. He's ready to roll." His next start should be the Rebel Stakes at Oaklawn. 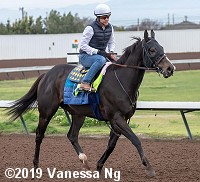 Dr. Dorr worked in partner with Game Winner going 5 furlongs in 59.80 on Sunday. He is unraced since finishing 5th in the Pacific Classic (G1) at Del Mar. 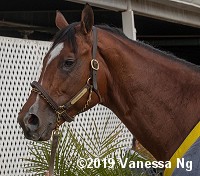 Dessman worked 6 furlongs on Sunday going 1:11.40, third fastest of the day. After winning his debut he finished second in the San Vicente (G2). 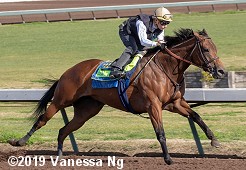 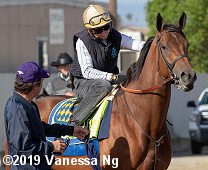 Marley's Freedom had the second fastest 6 furlong work on Saturday at Los Alamitos going 1:11.0. The Bob Baffert trainee is coming off a win in the Santa Monica Stakes (G2) last out. 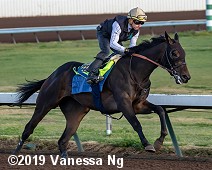 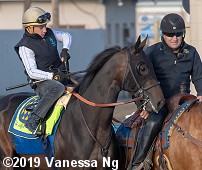 Mother Mother had a bullet work on Saturday at Los Alamitos going 4 furlongs in 46.20. The Bob Baffert trainee is coming off a 4th place finish in the Las Virgenes Stakes (G2) last out. 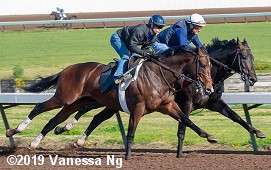 Omaha Beach had a bullet work on Saturday at Los Alamitos going 6 furlongs in 1:10.60. The Richard Mandella trainee broke his maiden in February at Santa Anita and is expected to start next in the Rebel Stakes at Oaklawn.