There were 3 stakes races at Saratoga on Sunday afternoon, before a crowd of 22,190 under overcast skies and temperatures around 80.

The highlight race on the card was the $250,000 Ruffian Invitational Handicap (G1) for older fillies and mares going 1 1/8 miles on the main track, and is part of the Breeders' Cup Challenge "Win and You're In" program, earning the winner a spot in the Ladies Classic. A field of 6 went to post, with La Troienne (G2) winner Princess Violet sent off as the 3-5 favorite after finishing second in the Ogden Phipps Handicap (G1) last out. In to challenge her included 2-1 second choice Wedding Toast off her win in the Lighthouse Stakes at Monmouth, and 9-2 third choice Tasty Temptation, winner of four straight including the Hill 'N' Dale at Woodbine last out.

Wedding Toast and Unrivalled Belle bumped at the start, and then jockey John Velazquez sent Wedding Toast to the front. She set fractions of 23.42, 46.96, and 1:10.47 over the fast track while saving ground down on the rail, with Princess Violet pressing her just to her outside a length behind. Into the stretch, Princess Violet moved up to challenge but Wedding Toast turned her away, opening up a 2 length lead in mid-stretch through a mile in 1:34.90, and finished 1 3/4 lengths in front in 1:48.14. It was a long 9 3/4 lengths back to late-running 30-1 longest shot Classofsixtythree third.

Right: Wedding Toast heads back to the barn after the race.


The $150,000 Peter Pan Stakes (G2) featured older horses going 1 1/16 miles on the Mellon turf course. Madefromlucky, winner of the Elkwood at Monmouth before disappointing in fourth in the King Edward (G2) at Woodbine, was sent off as the 3-2 favorite in the field of 7 over 7-2 second choice Whatsthescript, third in the Battlefield at Monmouth last out, and 9-2 third choice Conquest Curlinate, second in both the Opening Verse and the Firecracker Handicap (G2) at Churchill Downs.

Madefromlucky stumbled at the start but was quickest away, sent to the early lead by jockey Javier Castellano. He set fractions of 23.65, 47.01, and 1:10.05 while 1 1/2 lengths in front of 5-1 fourth choice Pinckney Hill and Conquest Curlinate who stalked in second and third respectively. Entering the lane, Pinckney Hill tired and dropped from contention, allowing Madefromlucky to open up a 2 1/2 length advantage at the 1/8 pole. Conquest Curlinate gradually gained on the pacesetter late but to no avail as Madefromlucky cruised under the line 1 1/4 lengths in front in 1:39.09. It was just a nose back to late-running 20-1 Two Weeks Off third. 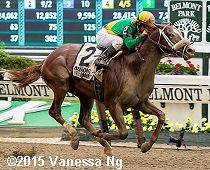 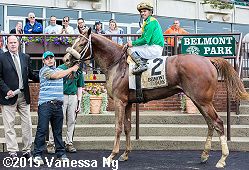 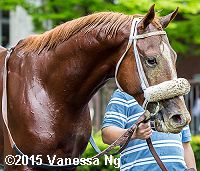 Left: Madefromlucky in the winner's circle.

Right: Madefromlucky heads back to the barn. 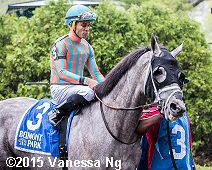 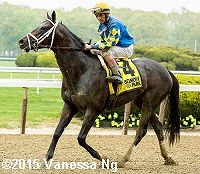