The opening Saturday of the Fall Championship Meet at Belmont Park featured two grade 1 events for distaffers. Overnight rains rendered the main track muddy and the turf soft, with the races contested under overcast skies and temperatures in the 60's, before just 5,224 spectators despite free admission all weekend.

The first stakes of the day was the $300,000 Ruffian Handicap (G1), a 1 1/16 mile trip around one turn of the main track. A field of just 6 (with 5 betting interests) went to post, with the two-horse Godolphin/Darley entry of Seventh Street and Skylighter sent off as the 3-10 favorite. Seventh Street exits a win in the Go For Wand Handicap last out, while Skylighter was 7th in the De La Rose, both at Saratoga. In to challenge them included 9-2 second choice Swift Temper, second in the Personal Ensign Stakes after winning the Delaware Handicap, and 6-1 third choice Luna Vega, winner of the Molly Pitcher at Monmouth last out.

12-1 Be Fair battled for the lead with Seventh Street down the backstretch through opening fractions of 23.03 and 45.58 while as many as 2 lengths in front of Swift Temper stalking them in third. On the turn, Seventh Street poked her head in front to take over through 3/4 in 1:09.71, while Be Fair tired and faded to eventually finish fifth. Swift Temper came out three wide into the stretch, passing Seventh Street at the 3/16 pole and drawing clear late to win by 1 3/4 lengths in 1:40.59 over the muddy track. It was a long 8 3/4 lengths back from Seventh Street to Luna Vega third. 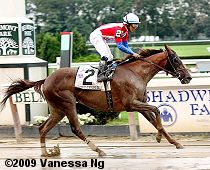 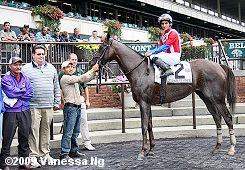 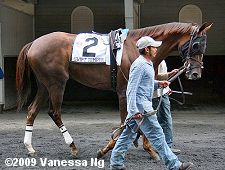 Left: Swift Temper in the winner's circle with trainer Dale Romans in the striped shirt. Romans said, "I think outside of the top two or three (older fillies and mares), she's as good as anybody. She's really gotten good this summer. I didn't like (bringing her back in 13 days) but she came out of the last race (second to Icon Project in the Personal Ensign) better than any race I've had her for. Her first day on the racetrack she was fresh and training well, acting like she hadn't run. And going back and watching the replays, she only really ran the last 1/4 mile in that race. I was a little more concerned about the shortening up of the distance, if she'd be fresh enough to be close like she was, but it worked out well."

Right: Swift Temper in the paddock before the race. 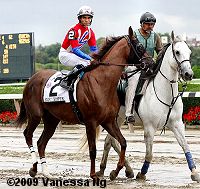 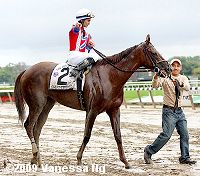 Right: Swift Temper circles after the race. Her jockey Alan Garcia said, "My filly broke okay and I saw (Be Fair) go to the lead. I said, 'let me be behind and see what I have left.' I thought maybe I could make a surprise on the outside and intimidate (Seventh Street). Maybe my filly did intimidate her a little bit and (Swift Temper) took advantage and won the race." 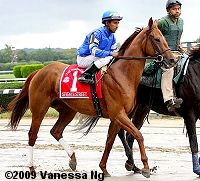 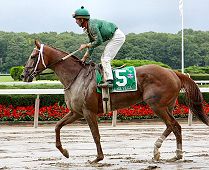 Left: Second place finisher and beaten favorite Seventh Street in the post parade. Rick Mettee, assistant to trainer Saeed bin Suroor said, "She was second-best today. They were going quick enough out there and (Swift Temper) was always traveling a little better than (Seventh Street). Still, 1:40 3/5 over that track is pretty good." Her jockey Rajiv Maragh added, "My filly broke good. I was real happy going down the backstretch, she was running a fair pace around there and I thought she would win from there, but the other filly just wore her down in the end. Visually, it looked like she had no excuses in the race. She had a pretty clear trip and the best chance of winning, but it happens. You can't win every day, right?"

Right: Third place finisher Luna Vega returns after the race. The 6-1 third choice trailed the field early under jockey Shaun Bridgmohan, closed on the leaders on the rail on the turn, then came out in the stretch to pass tiring horses to get third beaten 10 1/2 lengths. The Steve Asmussen-trained daughter of Malibu Moon improved her record to 4 wins, 3 seconds, and 2 thirds in 15 starts, earning $257,692 for owner Millennium Farms.


Two hours later, a field of 8 three-year-old fillies went to post in the $300,000 Garden City Stakes (G1) at 1 1/8 miles on the inner turf course. Gozzip Girl was sent off as the 2-5 favorite off two straight wins, in the Sands Point at Belmont and the American Oaks at Hollywood. In to challenge her included 6-1 second choice Pull Dancer, winner of an allowance at Saratoga after finishing a close second in the Alywow Stakes at Woodbine, and 8-1 third choice Shared Account, winner of the Lake Placid after finishing a close second in the Virginia Oaks.

Shared Account was hustled to the lead first time past the finish by jockey Ramon Dominguez, with 11-1 Keertana stalking her in second. Gozzip Girl was down on the rail close to the pace in the first 1/4 mile but she was bumped badly on the clubhouse turn and stumbled, almost unseating jockey Kent Desormeaux, causing her to lose momentum and get shuffled back to sixth. Shared Account set early fractions of 26.24, 52.36, and 1:17.83 over the soft going. Entering the stretch, Shared Account continued to lead, but 13-1 Miss World, seventh early, came out 4 wide and closed down the center of the course to pass the tiring pacesetters inside the 1/8 pole. Miss World drew away to win by 1 3/4 lengths at the line in 1:53.55. It was 2 lengths back to Keertana third, and another 1 1/2 lengths back to favorite Gozzip Girl fourth. 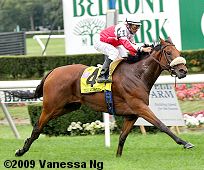 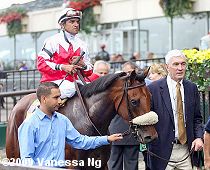 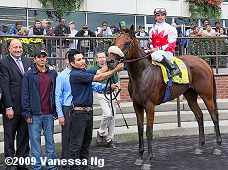 Right: Miss World in the winner's circle. with trainer Christophe Clement on the left. Clement said, "It took me a while to understand the filly. I ran her too short and on dirt last year, she's obviously a turf filly. Because she trained well, I thought she had more speed than she had and, in fact, she stays. Today was the first time we stretched her and obviously she ran well. It was actually a tough trip for her, too. The favorite got really badly squeezed inside, but mine also got squeezed between two horses on the outside. I don't think she had a great trip, it's just she was the best horse. We got lucky and she enjoyed the ground and we finished in front." 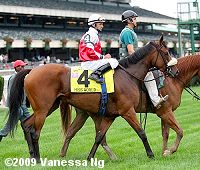 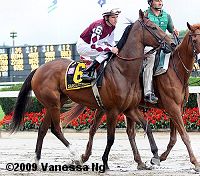 Left: Miss World behind the starting gate before the race. Her jockey Cornelio Velasquez said, "She broke well. The trainer told me to cover up and I covered up in behind horses. The last three-sixteenths when I asked her, I had a lot of horse. She loved the track very soft and she ran well the last part of the race."

Right: Second place finisher Shared Account in the post parade. The 8-1 third choice led most of the way under new jockey Ramon Dominguez until yielding in the final 1/16 mile. The Graham Motion-trained daughter of Pleasantly Perfect improved her record to 4 wins, 2 seconds, and 1 third in 9 starts, earning $250,560 for owner Sagamore Farm. 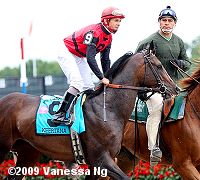 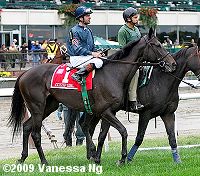 Left: Third place finisher Keertana in the post parade. The 11-1 shot pressed the pacesetter on the outside for 7 furlongs, drew even at the top of the lane, but weakened late to finish third beaten 3 3/4 lengths. The Thomas Proctor trained daughter of Johar improved her record to 4 wins, 3 seconds, and 2 thirds in 11 starts, earning $303,962 for owner-breeder Barbara Hunter.

Right: Fourth place finisher and beaten favorite Gozzip Girl heads on to the turf course before the race. Her jockey Kent Desormeaux said, "The first jump, they were already 3 in front. I thought, 'Let me find a way out,' and they came back to me. They were going so slow, I was strangling her trying not to run over them. It was amazing how she stayed on her feet - she's such an athlete." Her trainer Tom Albertrani said, "She appeared to come back all right. We'll see how she is cooling out and in the morning." On Sunday, Albertrani said she was fine and will continue to be pointed to the Queen Elizabeth II Challenge Cup at Keeneland next.