The $150,000 Red Smith Handicap (G2) at 1 3/8 miles on the turf is traditionally the last stakes race on the turf in New York, however, this year’s edition had to be moved to the main track due to heavy rains on Wednesday. As a result, all but 5 of the originally drawn 16 starters were scratched, the distance was cut back to 1 1/4 miles, and the race was downgraded to Grade 3 pending a review by the Graded Stakes Committee. Not surprisingly, the two shortest odds horses in the field were entered as "main track only", with Angliana sent off as the 8-5 favorite off his 2-race win streak in optional claimer company. The 2-1 second choice was Naughty New Yorker, winner of the Noble Nashua and the General McArthur, before finishing sixth in the Empire Classic last out.


Naughty New Yorker was allowed an uncontested lead for the first six furlongs through slow fractions of 26.15, 51.95, and 1:16.56 while as many as 3 1/2 lengths clear of Angliana stalking the pace in second. Entering the stretch, Angliana moved up alongside the pacesetter through a mile in 1:40.96, but Naughty New Yorker had plenty left in reserve for the stretch run. Jockey Jean-Luc Samyn asked him for run and got it, as the 2-1 shot pulled away from Angliana to win by 1 3/4 lengths in a time of 2:04.52 for the 1 1/4 miles over a fast track. It was a long 5 lengths back from Angliana to 4-1 third choice Crown Point in third. 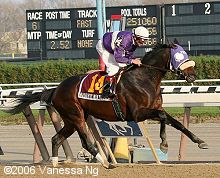 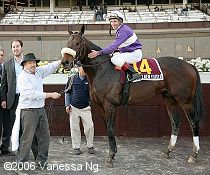 Naughty New Yorker in the winner's circle. Winning trainer Pat Kelly said, "We were all set to run next week in the Stuyvesant. We'll take the bigger purse. I (nominated) him to the (Cigar) Mile, just in case Discreet Cat gets a headache or something. He was running easy today and not fighting. It's nice to win an open stakes. Hopefully, he'll keep going for a while and win some more. I wouldn't run him back in the Stuyvesant. I'd rather keep an eye on the other race, because we've got the Queens County coming up, too." 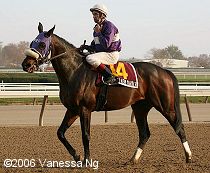 Naughty New Yorker returns after the race. Winning jockey Jean-Luc Samyn said, "I'm just happy to be reunited with my big horse and on top of that be back in the winner's circle. I lost him when I got hurt in Saratoga. For at Kelly to put him in this race 'main-track-only' worked out well. He's got plenty of speed and in the first sixteenth, he takes his time, but then after that he goes." 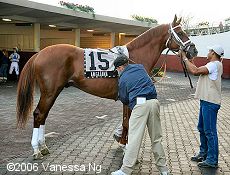 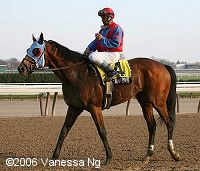