Fair Grounds Race Course in New Orleans hosted 6 stakes races on Saturday afternoon for Louisiana Derby Preview Day, including one of the major Triple Crown prep races: the $300,000 Risen Star Stakes (G2), the major local prep for the Louisiana Derby. A field of 11 (9 betting interests) went to post in this 1 1/16 mile main track feature, with Remsen Stakes (G2) third place finisher El Padrino sent off as the 4-5 favorite off an allowance win at Gulfstream last out. In to challenge him included the two horse entry of Mark Valeski and Mr. Bowling at 3-1, and Lecomte (G3) third place finisher Shared Property at 5-1.

Jockey James Graham sent 79-1 longest shot Hero of Order to a clear lead first time past the stands and he set fractions of 24.44, 48.72, and 1:13.15 while stalked by Mark Valeski 1 1/2 lengths back and to his outside. Hero of Order led into the stretch but tired at the 3/16 pole, allowing Mark Valeski to inherit a short lead with a furlong to go. El Padrino, who raced behind them in 3rd early, moved up to challenge. El Padrino and Mark Valeski dueled to the line, but El Padrino prevailed by a nose in 1:42.96 over the fast track. It wass a long 5 1/2 lengths back to 10-1 Z Dager third. Rosie Napravnik aboard Mark Valeski claimed foul against Javier Castellano aboard El Padrino for interference in the stretch but the claim was disallowed by the stewards. 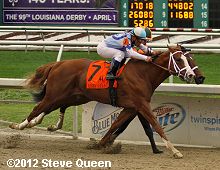 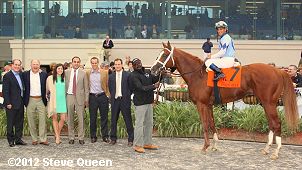 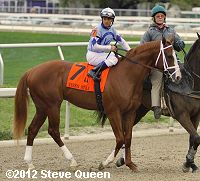 Left: El Padrino in the winner's circle. His trainer Todd Pletcher said, "We're certainly happy enough with the race today that that will be one of our first options," he said. "You hope it's the kind of race that he'll improve forward and become battle-tested a little bit and he's getting a little bit more professional all the time and, hopefully, learning how to win."

Right: El Padrino in the post parade. Jockey Javier Castellano said, "I was riding head-to-head with her and hitting my horse right-handed and she was hitting left-handed. You know, I thought it not a big deal. Before the wire, we were real tight. We never had big contact, though, and I think it was a good race and a very exciting race." 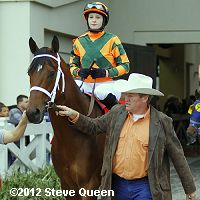 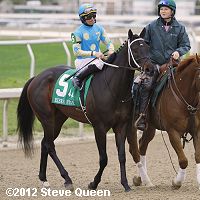 Left: Second place finisher Mark Valeski is led out to the track by trainer Larry Jones before the race. Jones said, "No reason not to (go to the Louisiana Derby). I was very proud of Mark. He ran big." Jockey Rosie Napravnik added, "He put in a game effort. Other than the brushing down the lane, I feel like if we were on the outside we probably would've won it. (El Padrino) bumped me just slightly down the lane a few times and was more leaning on me the whole way than anything else."

Right: Third place finisher Z Dager in the post parade. Trainer Steve Asmussen said, "It was better. They flew home. I think competition had a little bit to do with it today. He ran good; he ran solid. Shane gave him a dream trip and he ran well. You just keep moving forward and this keeps him in the game. I'd like to proceed to the Louisiana Derby with him off of that and we'll see what we can do."


The distaff counterpart to the Risen Star is the $200,000 Rachel Alexandra Stakes (G3) (formerly called the Silverbulletday) for 3-year-old fillies also going 1 1/16 miles on the main track. Believe You Can was sent off as the 3-2 favorite in the field of 6 over 2-1 Table Three Ten and 3-1 Summer Applause. 10-1 Avie's Sense was loose on the lead early, clicking off fractions of 24.16, 47.54, and 1:12.01 while as many as 3 lengths ahead of 5-1 Inny Minnie in second. Avie's Sense continued to lead to the 1/8 pole, but Summer Applause, 4th early, closed late on the outside to win by a length in 1:43.30. It was another 2 1/2 lengths back to Inny Minnie third, while favorite Believe You Can checked in fourth. 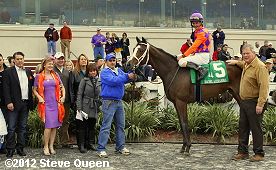 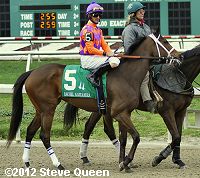 Left: Summer Applause in the winner's circle. Trainer Bret Calhoun said, "She's going the right direction. She's maturing mentally and physically all the time, getting good at the right time, and I think she's developed the kind of style that will keep her going. We are going to enjoy the moment. We want to get the right spacing for her. Obviously, the ultimate goal is the Kentucky Oaks and we want to figure out the best way to get her there."

Right: Summer Applause in the post parade. Jockey Robby Albarado said, "She rated kindly on the backside. We thought we'd be third or fourth and we were. I was just trying to be a good passenger. I got clear turning for home and she ran home nice. She's grown up rapidly in the last couple of weeks." 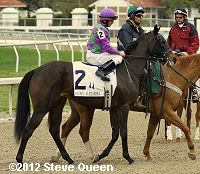 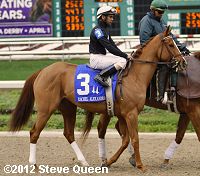 Right: Second place finisher Avie's Sense in the post parade. Trainer Josie Carroll said, "She's a pretty inexperienced filly. We tried to get an allowance race to go after her maiden win and it didn't fill. That maybe hurt her a little bit, but I know how good (Summer Applause) is so I'm very happy. She's graded stakes-placed off of her maiden win so we're happy with that."

Left: Third place finisher Inny Minnie in the post parade. The 5-1 fourth choice pressed the pace under jockey Rosie Napravnik, but did not respond when asked and finished third beaten 4 1/2 lengths. The Steve Margolis trainee improved her record to 1 win, 3 seconds, and 2 thirds in 6 starts, earning $182,500 for owner Jake Ballis. 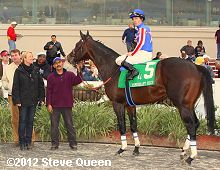 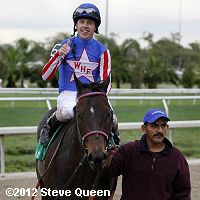 Left: Jockey Jesse Campbell celebrates as Nates Mineshaft heads to the winner's circle. Campbell said, "This horse has gotten so good. He's improved so much in such a short time. He used to be a little rank. He lets me ride him now and the horse is just full of confidence."

Right: Nates Mineshaft in the winner's circle. Trainer Austin Smith said, "If you saw the last race, he was worth the opportunity to try him in here. He just dominated that bunch. It wasn't anything like this bunch but he is 4 for 4 on the racetrack and we were here and didn't have to ship anywhere so we took a shot." 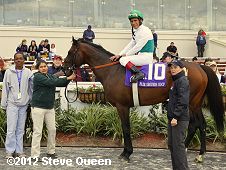 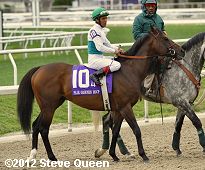 Left: Smart Bid in the winner's circle. Trainer Graham Motion said, "He really does love Fair Grounds and he is just such a game horse. I was a little concerned because I thought (Edgar) waited a little bit longer than he normally does to ask him to run; normally he asks him quite early. But he obviously knew what he was doing and it just worked out great. Maybe we'll have to come back for the next one (the Muniz on April 1)."

Right: Smart Bid in the post parade. Jockey Edgar Prado said, "When I got close (to Mr. Vegas) I thought we were just going to blow by but that horse kept on fighting. I'm glad that I got it." 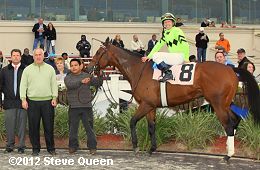 Winning trainer Steve Margolis said, "He's been a great horse for us. Always gives us his all. Like you said, had some tough beats but always ran good against really tough competition. We are real thrilled to get him back on the winning track today. There's the race on Derby Day going 5/8 and there's a race at Keeneland, the Shakertown. Don't know if we'll do both. We'll just have to wait and see. It will be one or the other though." 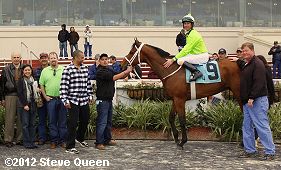 Winning jockey Corey Lanerie said, "My horse broke really sharp. Put me right where I wanted to be going around the first turn I was right behind Freddie One Bite. I thought he'd be my target so I tried to stalk him. The whole race I was travelling really nice. I was really happy with my position and when I called on him he just accelerated." Trainer Wes Hawley added, "The first time we ran him we were a little disappointed that we were taken down. This last time we won. Then, of course, we felt like we were undefeated so why not take a shot here?"