Fair Grounds Race Course in New Orleans hosted 6 stakes races on Saturday afternoon for Louisiana Derby Preview Day, including one of the major Triple Crown prep races: the $300,000 Risen Star Stakes (G2) at the Fair Grounds in New Orleans. A field of 10 went to post on Saturday in this 1 1/16 mile main track feature, with Rogue Romance sent off as the 2-1 favorite, unraced since finishing a distant third in the Breeders' Cup Juvenile. In to challenge him included 5-2 second choice Machen undefeated in 2 starts and making his stakes debut, and 7-2 third choice Mucho Macho Man, fourth in the Holy Bull at Gulfstream last out.

12-1 Decisive Moment battled for the lead with Mucho Macho Man for the first 5 furlongs through fractions of 24.67 and 49.24, with 7-1 Santiva stalking them third. Rogue Romance was unhurried back in 7th down the backstretch. Turning for home, Decisive Moment tired allowing Mucho Macho Man to open a 1 length lead on Santiva in mid-stretch. Santiva gave chase but Mucho Macho Man turned him away, extending his lead through the final furlong to win by 1 1/2 lengths in 1:43.98 over the fast main track. It was another 1 1/4 lengths back to late-running Rogue Romance third. 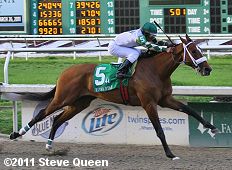 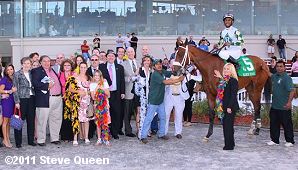 Mucho Macho Man in the winner's circle. His trainer Kathy Ritvo said, "We could (return for the Louisiana Derby). I'm just going to go back and see how he comes back and then we'll make our plans but he likes the track and I like it here! (Shipping in) was (a concern) but it was perfect. Everyone made us feel comfortable here and it was perfect. We're going to leave on Monday morning. I'm just excited because I've got my health back and I'm ready to go. And the horse is great, you couldn't ask for a better horse. He goes 2 miles like he's out to jog. He's just going to get better the further the distances get. It's a great accomplishment and he's improving and he's just got to stay going two turns."

His jockey Rajiv Maragh said, "My horse cooperated and settled in well behind the leaders and once he settled I expected him to make a big finish and he sure did. In the post parade he did everything right that you would ask from a horse. He settled but he was pretty focused so he was giving me all the right signals. I had been on him already in the morning so I am a little bit familiar with the horse. I've seen him run many times so it wasn't hard to get acquainted with him." 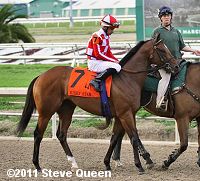 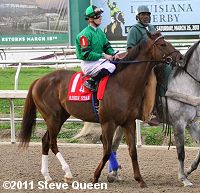 Left: Second place finisher Santiva in the post parade. His jockey Mike Smith said, "I thought he ran dynamite. Me and the winner drew away from the field, which is pretty impressive. That's tough to do down this long lane. I had to be. He was a little too fresh and if I came up next to the other horses he was going to keep pulling so I kind of got him away just to get him to drop it and he did. And then I eased back down. It was either that or go to the lead and I didn't want to do that today. (Mucho Macho Man) is certainly headed to the Derby and next time we're going to have a race under our belt."

Right: Third place finisher and beaten favorite Rogue Romance in the post parade. His trainer Ken McPeek said, "He ran good. They had him in a bit of a box there with nowhere to go and then, I don't know, it was a good solid race. The horse ran good and he overcame some obstacles to run as well as he did. We're happy. We're going to keep all of our options open. We don't have anything set in stone. He drank about a bucket of water coming off this race and we're looking at this as one step of many and he'll be fine. We'll look at the horse and check all of our options. It just depends on the horse and the time he needs so we'll see."


The distaff counterpart to the Risen Star is the $150,000 Rachel Alexandra Stakes (G3) (formerly called the Silverbulletday) for 3-year-old fillies also going 1 1/16 miles on the main track. Kathmanblu was sent off as the 3-5 favorite in the field of 6 over 4-1 Inglorious and 5-1 Gran Lioness. Jockey Jamie Theriot sent Gran Lioness to the front first time past the stands and she set slow fractions of 24.83, 49.27, and 1:14.30 while as many as 2 lengths in front of Bouquet Booth stalking in second. Entering the stretch, Gran Lioness continued to lead but Kathmanblu, fourth early and wide around both turns, closed on the pacesetter to take over the lead inside the 1/8 pole, drawing off to win by 1 1/4 lengths over Inglorious in 1:45.13. It was another 3/4 length back to Gran Lioness third. 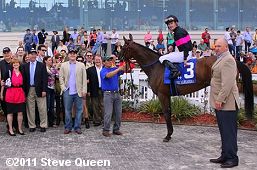 Kathmanblu in the winner's circle. Her trainer Ken McPeek said, "She's all class. She always has been. I think she is a lot better than she ran today. We were a little conservative with her with her workouts coming into the race. There's a lot of time between now and the Kentucky Oaks and that is obviously the bigger goal. She overcame everything. She got a little stirred up with the delay in the previous race. I guess they had trouble with the gate and my staff was bringing her over, she saw the running of the previous race and was really hard to handle in the paddock. She wasn't her usual self but she got it done. We have a choice between the Fair Grounds Oaks, the Gulfstream Oaks, or possibly the Ashland. We will take her back to Miami and Gulfstream. Let her settle in and take our time. We got no pressure at this point. Hopefully she will dictate where we go."

Her jockey Julien Leparoux said, "She is very good, you know.  She relaxed very nice in the first turn and she got it done. I got a clean trip and that was important." 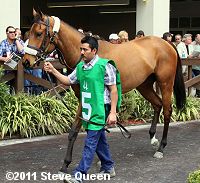 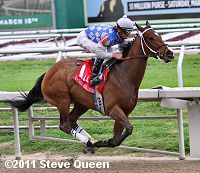 Right: Second place finisher Inglorious in the paddock before the race. Her jockey Chantal Sutherland said, "I'm really pleased. She's kind of funny with her break, that's just her. She missed a step but she picked herself up really well in the beginning. When I came down the lane, I feel like with that race underneath her Kathmanblu is not that far off. That's a really nice filly and I feel like we're competitive with her. I'm really excited for her. She didn't mind the kickback, she's a really nice,  classy filly."

Left: Third place finisher Gran Lioness leads first time by. Her trainer Bret Calhoun said, "She ran her race, we got the fractions we wanted, we got a clear lead, we had everything going our way, we just couldn't hold off a better horse going that far. Maybe it would have been different going a shorter distance, a flat mile or something like that, but today we just got outrun by a better horse, couldn't have asked for a better trip. I still think she's going to win multiple stakes around two turns, probably up to 1 1/16 with the right kind."


A field of 6 older horses contested the $125,000 Mineshaft Handicap (G3) over 1 1/16 miles on the main track. Mission Impazible was sent off as the 3-2 favorite over 9-5 Apart and 5-2 Demarcation. 16-1 Z Humor took over the lead entering the backstretch and set fractions of 46.75 and 1:11.76 while stalking Mission Impazible the whole way. Entering the stretch, Z Humor tired allowing Mission Impazible to inherit a short lead at the 1/8 pole. However Demarcation, who was unhurried early, closed with a rush 5 wide late to catch Mission Impazible in the final strides for the head victory in 1:43.45. It was another 2 1/2 lengths back to Apart third. 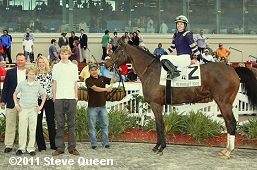 Demarcation in the winner's circle. His trainer Paul McGee said, "He is such a consistent horse. Every time he fires he runs his race every time. He ran really big in the Clark Handicap against a stellar field. Just freshened him up a bit and he showed up again today. He is a sound horse. Easy to gallop in the morning and easy to be around him in the barn. He's a class act that has won on turf, Poly and dirt. The timing is perfect for him to make the New Orleans Handicap."

His jockey Anna Napravnik said, "Paul said to let him fall away and relax back there. I didn't expect a pace that we ended up having but I could tell that they were flying up front so I wasn't really worried about it. He kicked home hard and ran very well. (Mission Impazible) did scare me a little bit at the end. He was fighting for the win but my horse was very game as well and I had plenty of horse left." 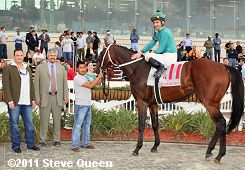 Expansion in the winner's circle. His trainer Steve Asmussen said, "The horse has been in California. Scott (Blasi, assistant) has done a great job with him out there. He worked super on the turf. Just thinking that the turf course didn't suit him out there, they weren't catching anybody. Gerard gave him a great trip today. He was in a perfect spot with a slow pace and we were very fortunate to win. The turf course here, a lot of the races there's not a lot of pace because of how well they close. He was very fortunate to be an ideal spot especially with them going that slow."

His jockey Gerard Melancon said, "I thought it was a really good effort. I knew I was closer than I needed to be and that told me right there that they were going absolutely too slow but he was within himself and I had a really good, clean trip."

Winning trainer Steve Margolis said, "He is really coming into himself this year. As we were joking being 6-years-old and all. Just a neat old horse. Gives it his all.  5 1/2 furlongs is really a great distance for him.  These races are usually not won by big margins anyway, so he did what he had to do and we'll give him a little rest now and probably look at something at Keeneland in the spring."

Winning jockey Julien Leparoux said, "There was a lot of pace in there. They went very fast the first half. I got her to relax and she came flying at the end, so that was good." Trainer Ken McPeek added, "She's been a top filly for a long time. We really wanted to get a stakes win under her belt.  She's been second in several Grade 1's and it was her turn."