Fair Grounds Race Course in New Orleans hosted 6 stakes races on Saturday afternoon for Louisiana Derby Preview Day. Racing conditions were ideal, with temperatures in the mid 60's, a slight breeze, and sunny skies. The headline race of the card is the $300,000 Risen Star Stakes (G2), the major local prep for the Louisiana Derby and ultimately the Triple Crown series. A field of 12 three-year-olds went to post in this 1 1/16 mile main track feature, with Drosselmeyer sent off as the 2-1 favorite in his stakes debut, exiting wins in a maiden at Churchill and an allowance at Gulfstream. In to challenge him included 5-2 second choice Discreetly Mine, fourth in the Spectacular Bid last out after finishing second in both the Futurity and the Champagne, and Lecomte winner Ron the Greek at 7-2.

Jockey Javier Castellano sent Discreetly Mine to the front soon after the start, opening up a 1 1/2 length lead on the clubhouse turn through easy fractions of 24.60, 48.75, and 1:13.44. 8-1 Tempted to Tapit stalked him the whole way. Favorite Drosselmeyer sat in midpack fifth early. Entering the stretch, Discreetly Mine began to pull away from the field, opening up a 2 length advantage over Tempted to Tapit at the 1/8 pole. Discreetly Mine cruised under the line 1 1/2 lengths in front in a time of 1:44.88 over the fast main track. It was just a neck back from Tempted to Tapit to 54-1 longshot Northern Giant third, while Drosselmeyer checked in fourth. 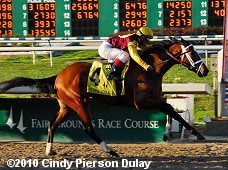 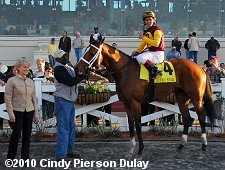 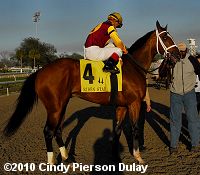 Left: Discreetly Mine in the winner's circle. Ginny DePasquale, assistant to winning trainer Todd Pletcher, said, "This horse gives 110-percent every time he runs. We're very pleased with the outcome of this race."

Right: Discreetly Mine returns after the race. Winning jockey Javier Castellano, celebrating his first Risen Star win, said, "I expected him to be in the lead. He broke well out of the gate and he looked happy galloping along. I'm very satisfied with the way the race developed; this course tends to favor those that come from behind. We got a position, relaxed, made a move on the backstretch and just continued to the wire. Today he hooked up with some really good horses and ran a really good race." 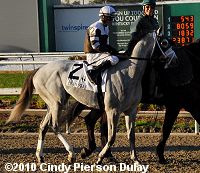 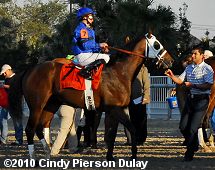 Left: Second place finisher Tempted to Tapit in the post parade. His jockey David Cohen said, "My horse didn't break too fast, which is kind of his style. I was behind horses in the first time and then got him outside and he seemed to relax very well. We were going a pretty easy pace and he ran good. He finished very strong and held of those other challengers for second."

Right: Third place finisher Northern Giant returns to be unsaddled after the race. The 54-1 longshot stalked the pace in third 2 lengths off the pace wide around both turns under jockey John Jacinto, but could not improve position late, finishing third beaten 1 3/4 lengths. The D. Wayne Lukas trained son of Giant's Causeway improved his record to 1 win, 2 seconds, and 1 third in 7 starts, earning $67,808 for owner Westrock Stables LLC. 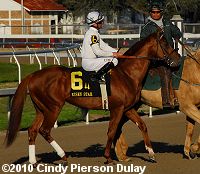 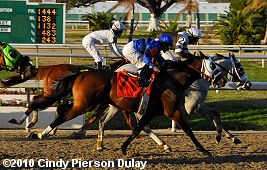 Fourth place finisher and beaten favorite Drosselmeyer in the post parade. His jockey Kent Desormeaux said,"It was just a slow pace. He was trying hard at the end and we just couldn't catch up. It was very encouraging the way he galloped out. He has a good turn of foot and I'm very pleased."

Right: Here are the second (Tempted to Tapit), third (Northern Giant), and fourth (Drosselmeyer) finishers just after the finish line. As you can see it was quite close between the three.


The distaff counterpart to the Risen Star is the $150,000 Silverbulletsay Stakes (G3) for 3-year-old fillies also going 1 1/16 miles on the main track. Frizette winner Devil May Care was sent off as the 4-5 favorite in the field of 6, exiting an 11th place finish in the Breeders' Cup Juvenile Fillies. In to challenge her included 3-1 second choice Quiet Temper, 5th in the Tiffany Lass last out, and 9-2 third choice Bella Medaglia, second in the Tiffany Lass.

Jockey Robby Albarado sent Quiet Temper to the front and she set a pace of 23.91, 47.50, and 1:11.75 with 9-1 Age of Humor stalking her in second the whole way. Entering the stretch, Quiet Temper opened up a 2 length lead, but 8-1 Jody Slew, who was last through the first 6 furlongs, closed down the center of the course to get up by a nose in 1:45.80. It was a long 10 lengths back from Quiet Temper to Age of Humor third. Favorite Devil May Care was fractious in the gate, stalked the pace in third early, and faded late to finish 5th beaten 13 1/4 lengths. 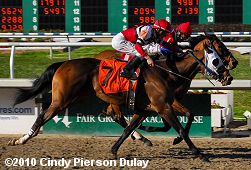 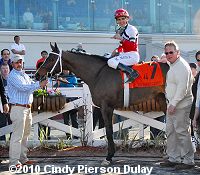 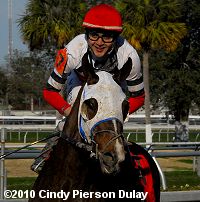 Right: Jody Slew in the winner's circle with trainer Bret Calhoun at her hip. Calhoun said, "I was really surprised my filly was that far back; as sharp as she's been in the mornings she's been just the opposite in the afternoons. I was afraid she might be more keen today but it ended up working out great. She didn't really get into the race until she got that horse in her sights. She was just kind of wide out there down the lane, running, but not like she was bearing down, but she got that horse in her sights and she found another gear."

Co-owner Dan Morgan said, "We're not used to winning exciting photos like that. We're usually second-best. You have to take heart medicine to watch her races." Co-owner Bill Martin added, "When she sees a horse in front of her, she goes. She likes to run them down. If she has to do it that way we're happy to leave her alone."

Left: Jockey Miguel Mena celebrates as Jody Slew returns after the race. Mena said, "I knew the pace was fast but at the 1/4 pole I was 20 lengths behind. I just kept driving and I really didn't think I had won at the end. I gave myself, oh, a 20% (chance of winning the photo). I didn't know if I got there; I was just waiting. I couldn't believe it. She's showing a lot of talent, but I don t think she's running her best yet. She's still green." 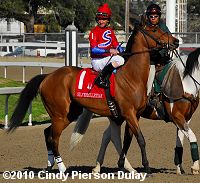 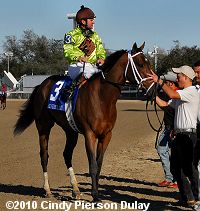 Right: Third place finisher Age of Humor returns after the race. The 9-1 shot stalked the pace in second the whole way under jockey Kent Desormeaux, but was no match for the first two in the late stages, finishing third beaten 10 lengths. The Mike Maker trained daughter of Distorted Humor improved her record to 2 wins, 1 second, and 1 third in 4 starts, earning $80,800 for owner Twin Creeks Racing Stable LLC. 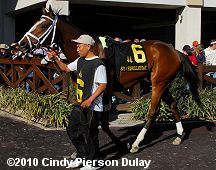 Fifth place finisher and beaten favorite Devil May Care in the paddock before the race. Her jockey Javier Castellano said, "I expected her to run better today. She might have been a little bit nervous coming off the layoff. I don't think she really liked the track the way she handled it today. We were in a perfect spot, but turning for home, when I asked her, she didn't respond. I worked her at Palm Meadows and I really liked the way she worked that day."