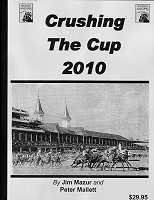 For nineteen years, professional handicappers Jim Mazur and Peter Mallett have produced Crushing The Cup, the flagship product of Progressive Handicapping Inc. In it, they compile all sorts of statistics from past runnings of the Breeders' Cup in order to come up with a winning profile for each of the World Championship races. No stone is left unturned as they examine track biases of the host track, prep races and running styles used by past winners, number of days since last start, and much more. The book is a real eye-opener for a casual bettor or fan since it gives such a participant so many different angles to work with to find that elusive "crush" on Cup days, but would definitely be useful to horseplayers at all levels of betting.

Unlike some handicapping publications on the market, Mazur and Mallett don't simply brag about their successes and not admit their failures. The entire first chapter is a narrative of last year's event, the second of 2 years at the Oak Tree meeting at Santa Anita, listing in detail what their picks had been and how they came up with them, what bets were placed based on those picks, and how much money was won or lost through the day as a result. Mallett explains how he met us on Wednesday morning to inspect the Pro-Ride surface, finding it had changed significantly from the previous year, losing the "bounce" it had in 2008. They admit to eliminating California Flag in the Turf Sprint, dismissing him as a "pretender", but overall they turned a profit over the weekend. We applaud them for this "full disclosure" given that this lends much more credibility to their publication than a series of what appears to be red-boarded "winning" bets like you might see elsewhere. No betting strategy is perfect and the "Crushers" are honest enough not to claim that theirs is.

The Breeders' Cup moving to a different track each year presents problems when trying to come up with a winning bet. Thankfully, with the Championships returning to Churchill Downs for a record seventh time, there is plenty of past history from which to draw some angles. Mazur and Mallett spend an entire chapter on the host track itself, discussing what the facility looks like and the track's biases at each of the Cup's race distances. This chapter is useful not only to those betting on the Cup races themselves, but also to fans visiting Louisville's "Kentucky Coffin" for the first time looking for an added edge when betting on the races the rest of the meet. Mazur writes, "There is no place we'd rather be for a Breeders' Cup."

For the rest of the book, each of the 14 World Championship races is featured in its own chapter. Each begins with a chart listing the past winners of the race, the winning trainer and jockey, the running style used, age (where applicable), post position, win payoff, and exacta payoff. In a quick glance you can already see some trends unfolding. Some races feature more winning favorites, some see more than a fair share of late ralliers (or speedsters) winning, some see most of its winners coming from a certain prep race. For exotics players, Mazur and Mallett also examine angles which point out horses most likely to finish second, third, or fourth. Each chapter concludes with the Daily Racing Form past performances of the last few Cup winners of the subject race, again giving the reader a chance to look for trends that may reappear this year. Additional statistics and tables, which used to be included in the printed book but have been omitted for space considerations, are available in a free appendix on their website, using the access code on Page 60.

To accompany Crushing the Cup, Mazur and Mallett release The Crushing Zone about 2 weeks before Championship day. This newsletter-sized publication sorts the pre-entrants for each race into the three categories of Contenders, Gray Zone, and Pretenders, based on the factors detailed in Crushing the Cup. Internet users can access this document from their website through a password supplied when you purchase the Zone, or you can have it shipped Priority Mail, and online the Zone is updated daily through Friday based on any last minute changes such as late scratches, good or bad morning workouts, or weather.

Crushing The Cup 2010 is an excellent publication for anybody wanting to bet the tough Breeders' Cup races on November 5-6 or for newer horseplayers wanting to learn more about the use of angles and biases when selecting their horses, on Cup day and otherwise. Mazur and Mallett have done their homework through seventeen years of experience, and the fruit of their labor is yours for just $29.95. From their Breeders' Cup experience they have expanded their operations and also publish similar statistical analyses for the Triple Crown and for the various major circuits in North America.

Crushing The Cup 2010 has a cover price of $29.95 and is available from Progressive Handicapping Inc. There are several package deals available which include combinations of some or all of their Breeders' Cup products.