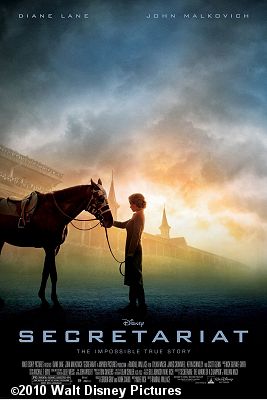 After the success of Seabiscuit back in 2003, we expected a series of horse racing related movies to follow soon after and Dreamer, Racing Stripes, and Hidalgo did follow within a relatively short period of time. Still there was one horse whose story needed to be told in movie form waiting to be done: Secretariat. Finally, 7 years later, Walt Disney Pictures has turned that dream into reality with a feel-good, family movie that can be enjoyed by both racing fans and the general public. Like Seabiscuit, there won't be many surprises for racing fans as the story is well known, especially through William Nack's book "Secretariat: The Making of a Champion", which was the inspiration for the movie.

Without question, the acting of Diane Lane, portraying owner Penny Chenery Tweedy, and John Malkovich, playing the part of eccentric trainer Lucien Laurin, carried this film. Penny was the Denver housewife quickly thrust into the role of a millionaire racehorse owner, after the death of her father Christopher Chenery who founded the famed Meadow Stable in Virginia. She had to lead a double life, flying back and forth between Colorado and the racetracks and farms of the east coast, while raising her 4 children. Lucien served as the "comic relief" in the film, whose casual, lackadaisical ways balanced out Penny's serious, ambitious manner. He was trying to retire from training, but after a visit by Penny during a frustrating session at the golf driving range, by far the funniest scene in the movie, he went back to the track. 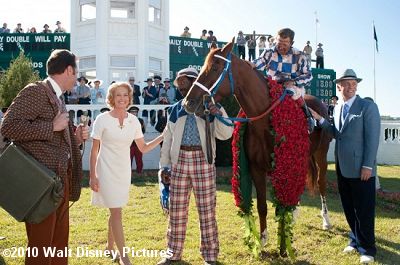 The theme of "girl power", popular nowadays in horse racing and in the media, is played up in this movie. Penny finds herself a woman taking on a male-dominated world, having to stare down everybody from the loud-mouthed owner of Secretariat's rival Sham who dismisses her as "just a housewife", boorish hecklers in the stands at the races, pushy reporters who questioned her horse's ability, the powerful Ogden Phipps, one of the richest men in America, and closer to home, her unsupportive husband who pressured her to sell her father's money-losing farm and horses rather than complete the mission of owning the first Triple Crown winner in 25 years.

The racing scenes, as expected were designed to get the audience excited, and at the screening we attended, some people actually clapped during Secretariat's wins in the Derby and Belmont (the Preakness was "glossed over" in the form of her children watching it on television). However, it was in these scenes that racing fans might find themselves distracted as this was where we found most of the inaccuracies. Keeneland Race Course stood in for Belmont Park, and for those who have visited both facilities they are like night and day. Given that Belmont Park has gone relatively unchanged since 1973, we wonder why the Belmont Stakes scenes could not be filmed there for the sake of accuracy. Keeneland with "Belmont Park" signage just looked wrong to us. One scene had the jockey's room apparently located at the end of a barn shedrow with horses looking out of the stalls! Generally the jockey's room is under the stands or near the paddock, not on the backstretch where barns would be located. Using CGI or some other post-processing techniques, Disney was able to simulate the old Churchill Downs grandstand as it looked in those days, but they also used the outdoor saddling stalls and walking ring, which were not built until 1986. Also, while the horse actors bore a physical resemblance to Secretariat, they were not big enough to make him look impressive next to the other horses. For instance, Sham often seemed to be bigger than Secretariat in the race sequences which was the opposite of reality. While some of the inaccuracies may bother serious racing fans, they should not affect the enjoyment of the movie for more casual fans of racing or those who do not follow the sport since they won't really know the difference.

Disney has produced an enjoyable, entertaining family movie for the fall season. Fans of racing history should enjoy this version of the Secretariat story, and like Seabiscuit 7 years ago, hopefully it will increase public interest in racing.

Other Secretariat books and videos:

Secretariat's Meadow: The Land, The Family, The Legend - by Kate Chenery Tweedy and Leeanne Ladin