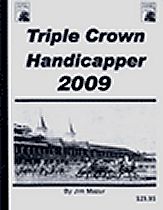 
For over two decades, Jim Mazur's Progressive Handicapping has earned a reputation as the source for winning angles for the Triple Crown and the Breeders' Cup. With large fields and large betting pools full of recreational money, big payoffs are the order of the day. Every bettor's ultimate goal is to find the right longshot to bet on to make for a profitable day at the races. Triple Crown Handicapper is the tool to help you find that longshot in the Kentucky Derby, Kentucky Oaks, Preakness Stakes, and Belmont Stakes.

Mazur's handicapping is based on contrarian methods by way of "knocks", statistically derived negative angles. The theory is that horses with the fewest knocks are the likely contenders to win the race. These knocks draw from many factors, including races at two, races at three, stakes wins, workouts and layoffs prior to the race, pedigree, high Beyers, etc. For example, the vast majority of Derby winners rally from off the pace, but in recent years the trend has shifted towards the stalkers. Mazur splits up the Rally category from earlier editions into Mid-Pack Stalkers and Deep Rally, and generally the deep rallier needs a very hot pace up front to close into. The book is a real eye-opener for a casual bettor/fan since it gives such a participant so many different angles to work with to find that elusive "crush" on the big day.

Mazur devotes the entire first chapter on the previous year's edition and how it fared. He explains, "We'll tell you what WE played. Now, this is NOT a forum for us to gloat about our successes. As you will see, we slip and fall numerous times en route to the windows!" Mazur not only gives you a realistic expectation of success, but also shows that he puts his money where his mouth is by including pictures of some of the betting tickets he purchased, win or lose. This is in distinct contrast to many other handicapping books which conveniently include examples where the techniques worked, but conveniently omit when it didn't, in typical "redboarding" fashion.

Each of the events is given its own chapter, since each race is played differently, which further demonstrates how difficult a feat a Triple Crown sweep is. Mazur includes numerous charts describing the basis for the various knocks he employs in his handicapping method. The first chart in each chapter lists the last 23 winners, trainer, jockey, post position, win payout, and running time. Immediately after the chart is a short paragraph summarizing how the favorites fared, demonstrating in a hurry that there is often a false favorite so overlays are readily found elsewhere. Mazur also includes a separate chapter covering the Derby second-place finishers, an invaluable weapon for use in the exacta, trifecta, and superfecta pools.

Mazur created the "Mazur Index" for each race, a quick-and-dirty handicapping method to sort out contenders and pretenders based on Beyers and wins. Also included in each chapter are the Daily Racing Form past performances of the last 17 winners and the last 14 Derby runners-up, so you can see where the knocks can be found and know what to look for this year. Glancing over the Derby winners, you can already see the powerful Beyer par angle in action as all but Giacomo and Lil E. Tee ran a triple digit figure in his career.

To accompany The Triple Crown Handicapper, Mazur releases The Derby Zone one week before Derby day, likewise the Preakness Zone and Belmont Zone over the same timeframe. These publications, also available online and updated daily on the website, sorts each race's pre-entrants into the three categories of Contenders, Gray Zone, and Pretenders, based on the factors detailed in Triple Crown Handicapper, and calculates the Mazur Indices, with the final update taking into account the post position draw and any late workouts. He also publishes a Triple Crown Undercard Handicapper book covering the many stakes races on the undercards, great for use when constructing Pick 3, 4, and 6 tickets.

You may also want to check out Triple Crown Undercard Handicapper 2007, the 2009 version should be much the same.