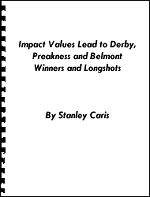 
It is a well-known fact that the Kentucky Derby is the world's most over-analyzed race. No other race is placed under the proverbial microscope to this extent other than the Run for the Roses. Handicapping angles that horseplayers would never even consider for every other race throughout the year, suddenly are brought to the forefront and used to determine wagering decisions on a large field of up to twenty 3-year-olds going 1 1/4 miles for the first time in their careers, before 150,000 or more screaming spectators at Churchill Downs.

Stanley Caris of American Turf Monthly has spent years collecting these various angles, and instead of suggesting simply to "play" or "avoid" horses satisfying a given angle, he took the next crucial step and quantified the validity of each of those obscure angles. Caris calculated the Impact Value of each angle, a figure which dictates how much more often an angle will score as compared to how often it would based on chance alone. For example, an angle with an impact value of 1.50 wins 50% more than chance alone would dictate. The most extreme case is an impact value of zero, meaning that angle never wins. One example of this is that no millionaire horse (as in, had over $1 million in earnings before starting at the Derby) has won the Roses. This angle probably correlates with the Breeders' Cup Juvenile winner jinx.

Most racing fans know of a few of the Derby angles, such as the Dosage Index and the magic number of 4.00, but there are dozens more that Caris has found through over 500 hours of research and the fruit of his labor is in this convenient publication for bettors to use to cash in huge. The angles draw from pedigree and past performance sources, not all of which are readily accessible to all fans, so deeper research beyond the program pages and Daily Racing Form may be required.

Caris not only found angles for the Derby, he expanded his project and gave the same treatment to the Preakness and the Belmont. The Triple Crown races often have longshot winners come in at huge prices, and some of the more obscure angles Caris has compiled may lead you to a big payday. Caris' research led him to score the cold trifecta in the 2003 Derby, with longshot Funny Cide defeating favorite Empire Maker and Peace Rules, as well as a winning ticket in 2002 with War Emblem, who was the lone qualifier that year for one of the angles given.

Professional and recreational horseplayers at all levels of experience and bankroll will be fascinated by the thorough detail of Caris' work and the many obscure handicapping angles that they may never have heard of before. Caris does an excellent job explaining the basis of the angle in easy-to-understand terms, and accompanies his explanation with a chart showing lists of the previous years' winners and which of them qualified under that angle. For each race, Caris includes his checklist of which angles work best to point at a winner and assigns each angle a point value. You merely tally up the total points for each horse and the horse with the most points is the selection. In the Derby, this method was successful in 1998 with Real Quiet, 2001 with Monarchos, and 2003 with Funny Cide, all of which were longshots.

This is clearly a publication for racing fans who will be wagering on the Kentucky Derby, Preakness, and Belmont Stakes, but casual fans who want to learn a few lessons on pedigree and handicapping can benefit from it as well.

Impact Values Lead to Derby, Preakness and Belmont Winners and Longshots can be purchased directly from the publisher, American Turf Monthly, for $39.95. Included with each order are Stanley Caris' longshot selections and value plays for all three classic races, conveniently emailed or faxed to you once entries have been drawn. This is a great value that could well pay for itself on the first Saturday in May.