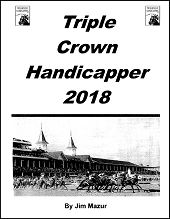 
Since the early 1990's, Jim Mazur's Progressive Handicapping Inc, has earned its reputation as the source for winning angles in both the Triple Crown and Breeders' Cup World Championships. With large fields of up to 20 in the Derby, and recreational bettors inflating the pools both on-track and around the world via simulcasts, large payoffs especially in the exotics become the norm rather than the exception. The horseplayer's ultimate goal is to find the right longshot to bet on to make for a profitable day at the races. Triple Crown Handicapper may be the extra edge you need to find that longshot this very wide-open Triple Crown season, where unlike in 2015 there is no standout like American Pharoah being touted as capable of the sweep.

The usual method handicappers use is to look for the probable winners. However, Mazur takes the opposite approach, looking for the probable losers instead, a contrarian approach that has served him well. Using statistics from the past 40 or so runnings, he has come up with several negative angles, called "knocks", and then assigns these to the field; the theory being, the more knocks on a horse, the less his chance to win. Knocks can draw from many factors, including number of starts, Beyer speed figures, days since last raced, pedigrees, and running style. For example, horses that rally from off the pace in the Derby are most likely to hit the board due to the often suicidal early fractions that soften up the front-runners and stalkers, leading them to fade when they "hit the wall" at the top of the long Churchill stretch (one of the longest dirt stretches in North America). But this is never guaranteed; if somehow the pace comes up slow or moderate, that wall doesn't happen and a midpack horse can go on to win. The book is a real eye-opener for a casual bettor/fan since it gives such a participant so many different angles to work with to find that elusive "crush" on the big day.

After several years tweaking the layout, Mazur has kept the 2018 edition set up much like 2017. He starts with a "Stroll Down Memory Lane" where he discusses some selected Triple Crown races from the past 20 years and their significance in the development of his system. He demonstrates the power of his contrarian stance, trying to dig deeper to avoid the obvious factors that most bettors will use, and hopefully come up with a longshot, not necessarily to win but even to hit the board to boost the exotic payouts. He first put the contrarian theory to the test in 1995 and was richly rewarded by ending a 20-year Derby losing streak at the betting windows.

Each of the events is given its own chapter, since each race is played differently, demonstrating a major reason why it is so difficult to sweep the Triple Crown; what works in the Churchill Downs "coffin" (long sides, short ends) at 1 1/4 miles might not work over the massive 1 1/2 miles of Belmont Park with its huge turns. Mazur includes numerous charts describing the basis for the various knocks he employs in his handicapping method. The first chart in each chapter lists the last 32 winners (from Ferdinand to Always Dreaming), trainer, jockey, post position, win payout, and running time followed by a short paragraph summarizing how the favorites fared. False favorites are inevitable with the higher proportion of "recreational money" in these pools. Although the favorite has won the last 5 Derbies, longshots often fill out the vertical exotics, so Mazur also includes a special section covering the second place finishers, very useful for constructing exacta, trifecta, superfecta, and high-5 tickets. A more recent innovation is the "Mazur Index" used to highlight overlaid contenders and weed out the underlaid "wise guy" horses, with the factors used changing depending on the race. After covering each race, he then gives a narrative of what happened during last year's edition, outlining selections given (and how he came up with them), bets made, and overall profit/loss on the card. This narrative also includes bets on the undercard, statistics of which are covered in the Triple Crown Undercard Handicapper.

Also included in each chapter are the Daily Racing Form past performances of the last 26 winners and the last 18 Derby runners-up, so you can see where the knocks can be found and know what to look for this year. Earlier editions of the book had extensive charts and tables covering stats for running style, jockey/trainer records, workout details, etc. but these are now given in an online appendix accessible at PHstats.com Looking at these, perhaps you may find a pattern of your own that he didn't cover.