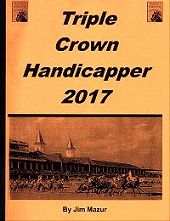 
For over a quarter century, Jim Mazur's Progressive Handicapping has earned a reputation as the source for winning angles for the Triple Crown and the Breeders' Cup. With large fields and recreational bettors inflating the pools on-track, from simulcast sites, and from home, one can expect larger than usual payoffs especially in the exotic pools. The horseplayer's ultimate goal is to find the right longshot to bet on to make for a profitable day at the races. Triple Crown Handicapper may be the extra edge you need to find that longshot this Triple Crown season, one where at time of writing there is no standout like American Pharoah being touted as capable of the sweep.

The way to find those longer odds winners is to think "out of the box" and not follow the crowd; to that end Mazur is a contrarian. Rather than look for what wins, he looks for what loses. Using statistically derived negative angles he assigns "knocks" to each horse in the field, with the theory that the more knocks against a horse, the less likely he'll win. Knocks draw from many factors, including number of starts, Beyer speed figures, days since last raced, pedigrees, and running style. For example, horses that rally from off the pace are most likely to hit the board due to the often suicidal early fractions. The book is a real eye-opener for a casual bettor/fan since it gives such a participant so many different angles to work with to find that elusive "crush" on the big day.

For the second time in 3 years the book's layout has been modified. Once again Mazur starts with a "Stroll Down Memory Lane" where he discusses some selected Triple Crown races from the past 20 years and their significance in the development of his system. He demonstrates the power of his contrarian stance, trying to dig deeper to avoid the obvious factors that most bettors will use, and hopefully come up with a longshot, not necessarily to win but even to hit the board to boost the exotic payouts. He points out how, in the first edition of Triple Crown Handicapper he ended a 20-year Derby losing streak by nailing the exacta in the 1995 Derby.

Each of the events is given its own chapter, since each race is played differently, demonstrating a major reason why it is so difficult to sweep the Triple Crown; what works in the friendly confines of Churchill Downs at 10 furlongs might not work over Big Sandy Belmont Park over 12. Mazur includes numerous charts describing the basis for the various knocks he employs in his handicapping method. The first chart in each chapter lists the last 31 winners, trainer, jockey, post position, win payout, and running time. Immediately after the chart is a short paragraph summarizing how the favorites fared. As explained above, false favorites are inevitable with the higher proportion of "recreational money" in these pools. Mazur also includes a special section covering the runners-up in the Derby, very useful for constructing exacta, trifecta, superfecta, and high-5 tickets. Earlier editions of the book had extensive charts and tables covering stats for running style, jockey/trainer records, workout details, etc. but these are now given in an online appendix accessible at PHstats.com. After covering each race, he then gives a narrative of what happened during last year's edition, outlining selections given (and how he came up with them), bets made, and overall profit/loss on the card. This narrative also includes bets on the undercard, statistics of which are covered in the Triple Crown Undercard Handicapper.

A more recent innovation is the "Mazur Index" used to highlight overlaid contenders and weed out the underlaid "wise guy" horses, with the factors used changing depending on the race. Also included in each chapter are the Daily Racing Form past performances of the last 25 winners and the last 17 Derby runners-up, so you can see where the knocks can be found and know what to look for this year. Perhaps you may find a pattern of your own that he didn't cover. One change seen on those pages is the demise of the 100+ Beyer requirement to win the Derby. Despite the last 3 winners satisfying the old rule, 2014 winner California Chrome ended a streak of 5 that didn't, so that par has been revised down to 98.