The feature race on Thanksgiving Thursday at Del Mar was the $100,000 Red Carpet Handicap (G3), a 1 3/8 mile trip around three turns of the Jimmy Durante Turf Course for older fillies and mares. The race had been run as the Beverly Hills Handicap at the now-demolished Hollywood Park. Conditions were excellent at the seaside oval with sunny skies and temperatures in the mid 60's and firm going. Orglandes was sent off as the 11-10 favorite in the field of 10, shipping in from New York off her allowance win at Belmont Park on October 9. In to challenge her included 9-2 second choice California Kook, 5th in the Queen Elizabeth II Cup (G1) after finishing 4th in the Del Mar Derby (G2), and 5-1 third choice Blame Debbie, winner of 3 straight including the Dowager (G2) at Keeneland.

Jockey Victor Espinoza sent 49-1 longest shot Aunt Lubie loose on the lead for the first lap of the course through fractions of 24.91, 49.06, 1:14.71 , and 1:40.08 while pressed by 16-1 Going to Vegas and stalked by Blame Debbie. Entering the stretch for the final time Aunt Lubie tired allowing Going to Vegas to inherit the lead through 1 1/4 miles in 2:04.46. Orglandes, 6th early under Irad Ortiz Jr., came out for room, bumped Blame Debbie into Quick at the 1/16 pole but continued on to win by 1/2 a length over Going to Vegas in 2:15.85. It was another length back to 8-1 Quick third. There was a stewards' inquiry into the bumping incident, however the stewards ruled that it did not cost either Blame Debbie or Quick a chance at a better placing so the result was allowed to stand. 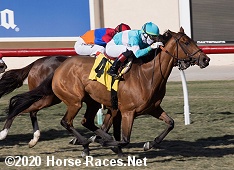 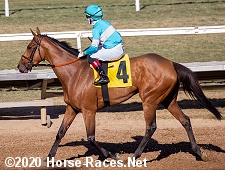 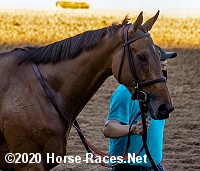 Left: Orglandes returns after the race. Jose Hernandez, assistant to winning trainer Chad Brown said, "I wasn't really worried (about the inquiry). There was a little bump but nothing serious. Chad talked to the jockey in the morning. He said just to break and play off of it. It's a mile and three-eighths, a long race, so the jockey can do what he feels. The pace was good and he was in a really good position and then made a strong finish."

Right: Orglandes heads back to the barn after the race. 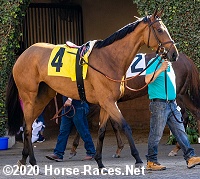 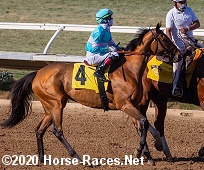 Left: Orglandes in the paddock before the race.

Right: Orglandes in the post parade. Winning jockey Irad Ortid Jr. said, "I had no special instructions. Just ride her. I liked where I was throughout the race. We thought this would be a better distance for her. The last time (winning allowance race at Belmont Park on October 9) it was too short for her (nine furlongs). She got 'racy' on me. But this distance is much better for her. She did well with it." 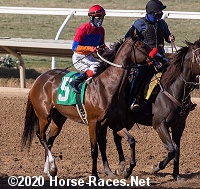 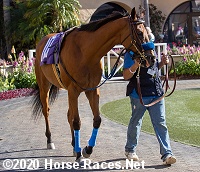 Right: Third place finisher Quick in the paddock before the race. The John Sadler trainee improved her record to 3 wins, 5 seconds, and 3 thirds in 15 starts, earning $110,335 for owner Hronis Racing.