On Saturday, a field of 9 three-year-olds went 1 1/16 miles in the $300,000 Rebel Stakes (G2) at Oaklawn Park, the major local prep for the Arkansas Derby and an important race for graded stakes earnings to make the Kentucky Derby field. The Factor was sent off as the 7-5 favorite off two straight wins, a maiden and the San Vicente Stakes (G2) at Santa Anita. In to challenge him included 9-5 second choice Sway Away, second in the San Vicente (G2), and 7-2 third choice J P's Gusto, second in the Southwest (G3) last out. Unfortunately, Alternation had to be scratched after he flipped in the starting gate causing a superficial cut in his left foreleg.

Jockey Martin Garcia sent The Factor to the front first time past the stands and he was allowed an uncontested lead of 2 1/2 lengths while setting fractions of 23.33, 46.77, and 1:10.98 over the fast track, with 35-1 Saratoga Red and 7-1 Archarcharch stalking him second and third respectively. Entering the stretch, Saratoga Red tired while 25-1 The Factor, 7th early, started his rally 5 wide. However The Factor easily pulled away to win by 6 1/4 lengths in 1:42.19. It was just a neck back to Archarcharch third. 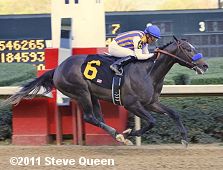 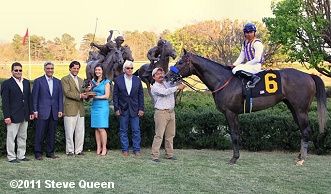 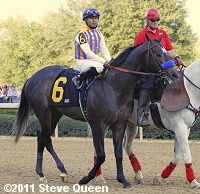 Left: The Factor in the winner's circle. Winning trainer Bob Baffert said, "It was pretty amazing what he did today. This was a more demanding track than Santa Anita and he probably got more out of this than any race so far. Right now I'd say we would probably come back (for the Arkansas Derby). He clearly could have gone 1 1/8 today."

Right: The Factor in the post parade. Winning jockey Martin Garcia said, "He is really that fast. He surprises a lot of people. He doesn't look like he's going as fast as he is. He just keeps going. Today was his first time going that distance and look what he did. Nobody was going to catch him today." 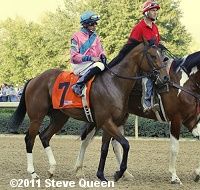 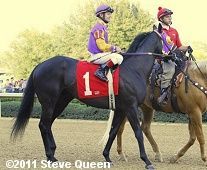 Left: Second place finisher Caleb's Posse in the post parade. His trainer Donnie Von Hemel said, "I'm proud as punch of Caleb. I was afraid that the winner could get out there and put up a 46 and change on the front end. That's what he did and he just proved too tough to catch, but I'm proud as I can be of him."

Right: Third place finisher Archarcharch in the post parade. The 7-1 fourth choice stalked the pace in 3rd saving ground under jockey Jon Court, but could not improve late to finish 3rd beaten 6 1/2 lengths. The William Fires trainee improved his record to 2 wins, 1 second, and 1 third in 5 starts, earning $232,744 for owners Robert and Loval Yagos. 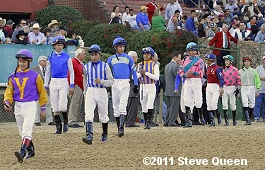 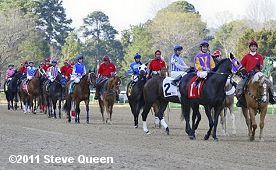 Left: The jockeys head over to the infield saddling area before the Rebel.


Immediately before the Rebel, a field of 7 older fillies and mares went 1 1/16 miles in the $150,000 Azeri Stakes (G3), the major local prep for the Apple Blossom Handicap. Blind Luck was the 6-5 favorite off four straight 2nd place finishes including the La Canada (G2) last out. Also in the field included 8-5 second choice Havre de Grace, unraced since finishing third in the Breeders' Cup Ladies Classic (G1), and 5-1 Spacy Tracy, winner of three straight including the Top Flight (G2) in November. 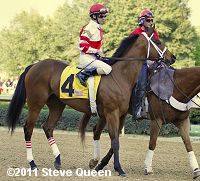 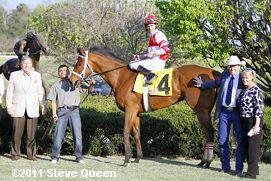 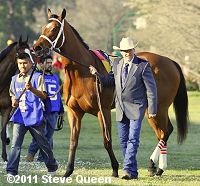 Left: Havre de Grace in the winner's circle with trainer Larry Jones at her hip. Jones said, "She did everything we expected her to. She had trained very well. It was awesome. I wasn't planning on going out and equaling the stakes record, but that was a bonus that she did it fast. She's an incredible mare."

Right: Havre de Grace in the paddock before the race. Winning jockey Ramon Dominguez said, "When I asked her to run she just picked it up nicely and really, turning for home, she was striding out beautiful and galloped out strong." 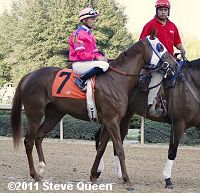 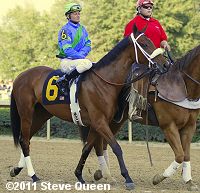 Left: Second place finisher Blind Luck in the post parade. Her trainer Jerry Hollendorfer said, "I didn't expect the pace to back up if they gave them an easy lead. She ran well."