There were two graded stakes run at Oaklawn Park on Saturday afternoon. Conditions were excellent at the historic Hot Springs oval, with 19,886 on hand under cloudy skies and temperatures in the low 70's.

The first stakes race was the $150,000 Honeybee Stakes (G3) for three-year-old fillies going 1 1/16 miles worth 50 points to the winner in the "Road to the Kentucky Oaks". Flashy Gray was sent off as the 2-5 favorite in the field of 8, making her stakes debut off consecutive allowance wins. In to challenge her included 5-1 second choice Rose to Gold, second in the Martha Washington after winning the Delta Princess (G3), and 8-1 third choice Sister Ginger, winner of the Martha Washington. 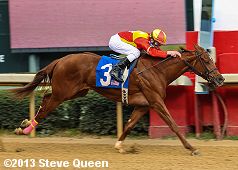 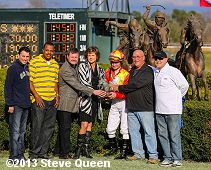 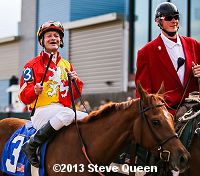 Left: The trophy presentation for the Honeybee Stakes. Winning trainer Sal Santoro said, "Hiring Borel was a no brainer and I just know this filly so well. I've had her from the beginning and I know what she needs. All our plans paid off today. Calvin and I met this morning and came up with a strategy, but in the end, I told him ‘Just ride your race.' We'll know more in the morning, but we may go on back to Florida and train up to the Kentucky Oaks."

Right: Rose to Gold returns after the race. Jockey Calvin Borel said, "We had planned on sitting right off the pace, but she broke so sharp. She has a lot of wind. She took it to them. (Flashy Gray) is a nice filly. I had seen her races. Mike (Smith) tried to come to me at the 3/8 pole, but my filly pulled away. I knew we would be double tough. She came home strong." 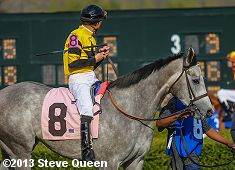 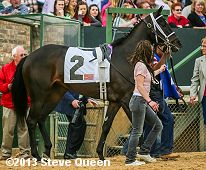 Left: Second place finisher and beaten favorite Flashy Gray in the paddock. Jockey Mike Smith said, "She ran great. It was her first time around two turns and the winner already had a lot of bottom. That made the difference. You'll hear a lot from her."

Right: Third place finisher American Sugar heads out to the track before the race. Jockey Alex Birzer said, "She dropped back farther than I wanted, but once she relaxed, she got it together." 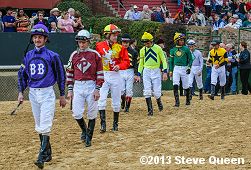 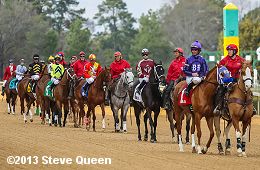 Left: The jockeys for the Honeybee head over to the infield saddling area.

The $150,000 Razorback Handicap (G3) features older horses going 1 1/16 miles as the major local prep for the Oaklawn Handicap. Alternation was sent off as the 2-1 favorite in the field of 10, unraced since 6th in the Hawthorne Gold Cup (G2) in October. In to challenge him included 7-2 second choice San Pablo, second in the Essex Handicap after winning the Queens County, and 4-1 third choice Atigun, third in an allowance after finishing third in the Breeders' Cup Marathon (G2). 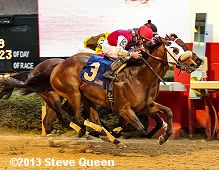 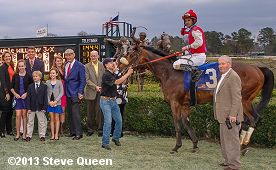 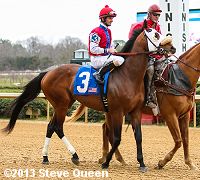 Left: Cyber Secret in the winner's circle. Winning trainer Lynn Whiting said, "He had been chasing horses and wouldn't have anything left for the end. We knew he'd be in a stalking position and we wanted him to be covered up. At the half mile pole he was in the clear and it was his race to win or lose from that point. He was able to grind them down. It was a good win, but I've never had a bad one. I'd think he'd deserve a chance in a race like the Oaklawn Handicap."

Right: Cyber Secret in the post parade. Jockey Robby Albarado said, "He's a horse that's maturing. He's going to be a horse to be reckoned with the rest of the year. He's a fighter. He proved that last time. He's continuing to improve." 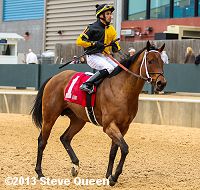 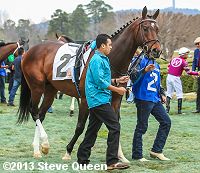 Right: Third place finisher Atigun in the paddock before the race. Phil Bauer, assistant to trainer Ken McPeek said, "He ran great. He seemed to relax good. I'm thrilled. It was an improvement off his last race. I think 1 1/8 is his best distance and hopefully this will set him up well for the (Oaklawn Handicap)." 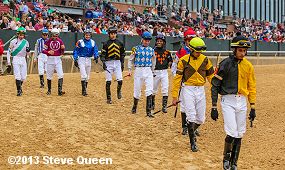 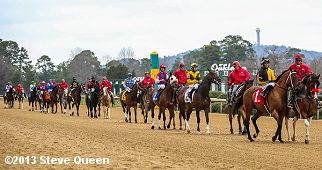 Left: The jockeys for the Razorback head over to the infield saddling area.