There were two graded stakes run at Oaklawn Park on Saturday afternoon. The 24,111 fans in attendance, the largest crowd so far in 2011 at the historic Hot Springs oval, enjoyed sunny skies and temperatures in the lower 70's. The first stakes race was the $125,000 Honeybee Stakes (G3) for three-year-old fillies going 1 1/16 miles, a prep for the Fantasy Stakes and ultimately the Kentucky Oaks. Joyful Victory was sent off as the 3-2 favorite in the field of 7, winless since her debut and unraced since finishing a distant fifth in the Breeders' Cup Juvenile Fillies. In to challenge her included 5-2 second choice Dixie City, winner of the Demoiselle at Aqueduct last out, and 3-1 Rigoletta, fifth in the La Habra at Santa Anita after winning the Oak Leaf at Hollywood.

Jockey Michael Baze sent Rigoletta to the lead first time past the stands and she set fractions of 22.67 and 45.91 while being pressed by 30-1 longest shot Norma's Dream to her outside for the first 5/8 mile. On the far turn, Joyful Victory, who raced in 5th early, moved up to poke her head in front through 3/4 in 1:11.28. 10-1 Holy Heavens, 6th early, put in a late move into the stretch but Joyful Victory was pulling away, finishing up under wraps 8 3/4 lengths ahead in 1:44.83 over the fast track. It was another 3 lengths back to Dixie City third. 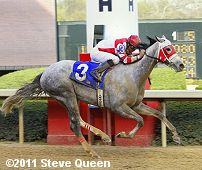 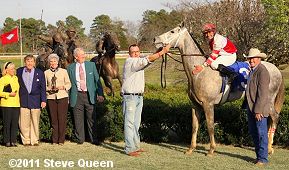 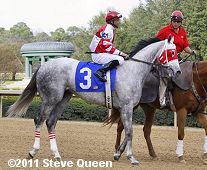 Left: Joyful Victory in the winner's circle with trainer Larry Jones at her hip. Jones said, "It was a great race for her and a tremendous race for a first one back. I think she got a little tired there at the end, but that's good. She should get a lot out of this and it should set us up great for the Fantasy next and set us up for the Kentucky Oaks hopefully after that."

Right: Joyful Victory in the post parade. Winning jockey Mike Smith said, "It set up almost too good to tell you the truth. I knew I was going to have to hit the front too soon. Mr. Jones told me he put the blinkers on because when she's by herself she's liable to do something. He told me to stay aware of that and of course I hit the front pretty early.  I hit her twice just to make sure, but she was home by then. She's very talented, and it's good to know she handles this track so well because it is so much like Churchill Downs and I know the ultimate goal for them would be the Oaks." 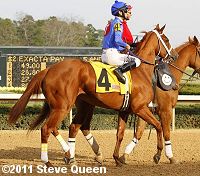 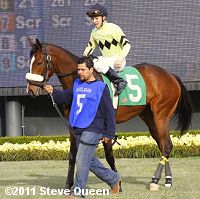 Left: Second place finisher Holy Heavens in the post parade. The 10-1 shot raced in 6th early 10 lengths off the pace under jockey Israel Ocampo, came out wide for the drive and was second best. The Benard Chatters trainee improved her record to 2 wins, 2 seconds, and 1 third in 8 starts, earning $111,440 for owner-breeders K.K. and V.D. Jayaraman.

Right: Third place finisher Dixie City in the paddock before the race. The 5-2 second choice settled in 4th 3 lengths off the pace under jockey Jeremy Rose, came out wide into the stretch but lacked a significant response to finish third beaten 11 3/4 lengths. The Tony Dutrow trainee improved her record to 3 wins, 0 seconds, and 3 thirds in 6 starts, earning $215,680 for the estate of late owner-breeder Edward P. Evans.

The $125,000 Razorback Handicap (G3) features older horses going 1 1/16 miles as the major local prep for the Oaklawn Handicap. Winslow Homer was sent off as the 9-5 favorite in the field of 7, unraced since winning the Curlin Stakes at Saratoga last August. In to challenge him included 5-2 second choice Win Willy, second in the Essex Handicap after winning the Fifth Season Stakes, and 3-1 third choice Thiskyhasnolimit, shipping in from California off a fourth place effort in the San Fernando Stakes at Santa Anita.

11-1 Kate's Main Man was sent to the lead by jockey Calvin Borel and he set fractions of 23.98, 48.00, and 1:12.32 while saving ground around both turns. 7-2 second choice It Happened Again pressed the pace a length back in second, just to the outside. Entering the stretch, It Happened Again took over the lead. Thiskyhasnolimit, 4th early, put in a late rally but It Happened Again easily held him off by 1/2 a length, getting the win in 1:43.58. It was another 1 1/4 lengths back to late-running Win Willy third, while favorite Winslow Homer raced in 6th throughout and failed to improve position. 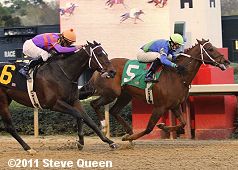 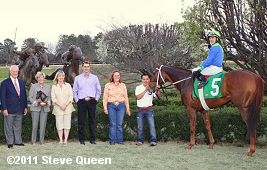 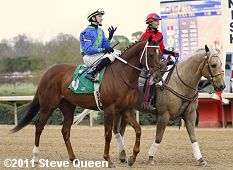 Left: It Happened Again in the winner's circle. Devron Leingang, assistant to trainer Steve Asmussen said, "The best thing about it is that he was a horse my girlfriend and I claimed for Maggi and Steve for $20,000 at Woodbine. It was a mutual thing between us all. We had been watching him up there and decided to take a chance on him. To see him turn into a stakes winner like this is really, really great."

Right: It Happened Again in the post parade. Winning jockey Michael Baze said, "The way we were able to sit just off that pace worked out perfectly. He's such a nice horse. When I've asked for it, he's given it to me. He's one of those horses that fights, he keeps digging in." Winning owner Maggi Moss said, "I'm just hysterical right now. God, that was great. I need to start showing up for these things. I wish we could keep him stabled at Oaklawn all year. He loves the place. I won't (enter him in the Oaklawn Handicap). He's getting a break. He's had three straight races. He's getting lots of carrots and apples and a break." 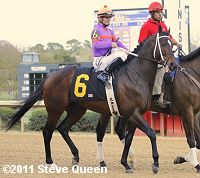 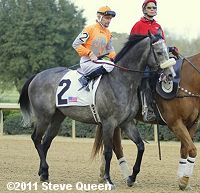 Left: Second place finisher Thiskyhasnolimit in the post parade. The 3-1 third choice raced in 4th 3 lengths off the pace under jockey Jamie Theriot, then slowly gained on the winner late. The Steve Asmussen trainee improved his record to 4 wins, 4 seconds, and 1 third in 15 starts, earning $581,532 for owners Cathy and Bob Zollars and Mark Wagner.

Right: Third place finisher Win Willy in the post parade. The 5-2 second choice was slow away and raced 5th 4 lengths off the pace under jockey Cliff Berry, came out 5 wide into the lane to pass tiring horses finishing 3rd beaten 1 3/4 lengths. The McLean Robertson trainee improved his record to 6 wins, 4 seconds, and 2 thirds in 17 starts, earning $611,960 for owner Jer-Mar Stables. 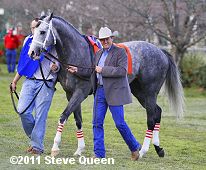 Sixth place finisher and beaten favorite Winslow Homer in the paddock before the race with trainer Larry Jones. The 9-5 favorite raced in 6th early under jockey Mike Smith 4 lengths off the pace, but failed to fire when asked and finished 6th beaten 5 1/4 lengths. The Larry Jones trainee has a record of 4 wins, 0 seconds and 2 thirds in 7 starts, earning $224,075 for owner Fox Hill Farm.