Queen's Plate Day is one of the biggest racedays of the year at Woodbine, attracting the biggest crowd of the year. Those who filled the grandstand and the apron on Sunday afternoon were treated to five additional stakes races on the undercard, both run over the E.P. Taylor Turf Course which is outside of the main Polytrack oval. After a hot dry week in Toronto, Sunday was dark and overcast with intermittent showers and temperatures in the mid 70's. 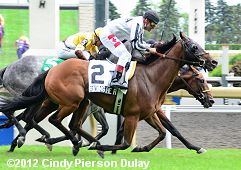 The richest race on the undercard is the $250,000 King Edward Stakes (G2) presented by TVG. At 1 mile on the turf for older horses, is a very early prep for the Woodbine Mile (G1). A field of 6 went to post, with Hothersal sent off as the 2-1 favorite off a third place finish in the Eclipse (G3), over 5-2 Trend and 3-1 Hollinger. 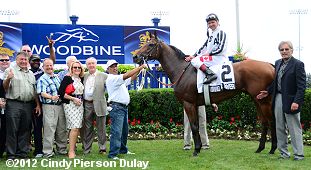 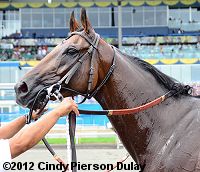 Left: Riding the River in the winner's circle. Winner trainer Dave Cotey said, "We were hopping in the bar. Todd (Kabel) gave him an awesome ride. He sat back, and made his run. I love him for it. We needed that. The horse deserves a win. He always tries. He runs his guts out every time."

Right: Riding the River heads back to the barn. 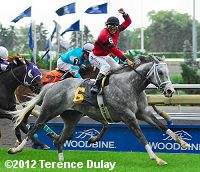 The first graded stakes on the card was the $200,000 Highlander Stakes (G2) presented by Pizzaville for older horses sprinting 6 furlongs on the turf, a very early prep for the Nearctic Stakes (G2). Surfrider, an allowance winner at Belmont last out after finishing 5th in the Shakertown (G3) at Keeneland, was sent off as the 9-5 favorite in the field of 9 over 2-1 Fiddlers Patriot and 9-2 Gypsy Ring. 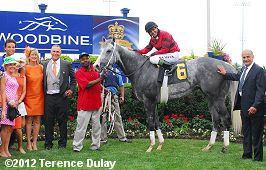 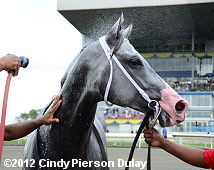 Left: Smokey Fire in the winner's circle. Winning jockey Eurico Rosa da Silva said, "He was running very focused. He kicked in and he was running strong. He was in great shape."

Right: Smokey Fire heads gets hosed off after the race. Trainer Sid Attard added, "When he was so far back, I was worried. I didn't want to see him get stuck in traffic. He ran a great race." 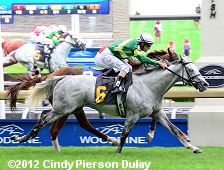 The longest race on Plate day is the $150,000 Singspiel Stakes (G3) for older horses going 1 1/2 miles on the turf, an early prep for the Pattison Canadian International (G1). Louisville Handicap (G3) winner Simmard was sent off as the 9-10 favorite in the field of 7 over last year's winner Musketier at 3-1 and Big Red Mike at 7-1. 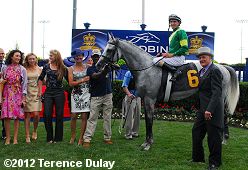 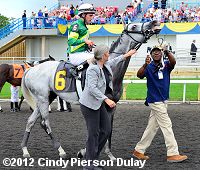 Left: Musketier in the winner's circle with trainer Roger Attfield at his hip. Attfield, who trained the first two finishers, said, "I was cheering for both of them. Musketier is a wonderful old horse. He's still a battler. I'm proud of both. I love them."

Right: Musketier returns after the race. Jockey Ramon Dominguez said, "He had a great turn of foot. He was in top form today. When he angled out, he had a great kick. The other horse wasn't giving up." 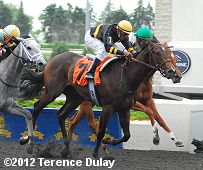 Kicking off the stakes action on Sunday was the $150,000 My Dear Stakes for 2-year-old fillies sprinting 5 furlongs on Polytrack. Just Got In, winner of her debut last out, was sent off as the 4-5 favorite in the field of 7 over 3-1 Ju Ju Eyeballs and 7-2 Lake Dancer. Jockey Chris Griffith sent Just Got In to the lead and she set fractions of 21.78 and 45.10 while pressed by Ju Ju Eyeballs. In the stretch, Ju Ju Eyeballs tired, as Just Got In held off late-running Lake Dancer to win by a neck in 59.11 It was another 1/2 length back to 44-1 Evangeline's Hope third.
Results Chart 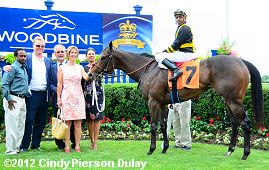 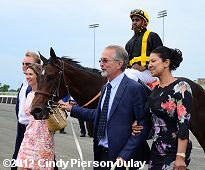 Left: Just Got In in the winner's circle. Winning trainer Ricky Griffith said, "Her first race was like a breeze. She never got a test. She won by herself in hand. She's got some class."

Right: Just Got In heads to the winner's circle. Jockey Chris Griffith, brother of the trainer added, "To be honest, it felt like we were going too fast. I was trying to get my filly to relax and slow down a little bit. But she wouldn't have any part of it, so we just had to go on with it. Luckily, she held on. She was very tired but she kept fighting right to the wire." 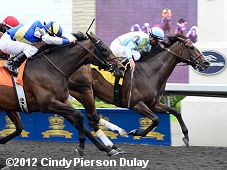 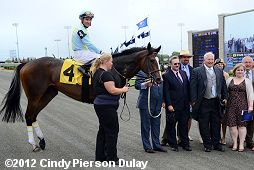 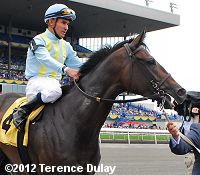 Left: Stars to Shine refused to go in the winner's circle, so instead they posed on the harness track.

Right: Stars to Shine heads to the winner's circle (but never entered). Winning trainer Mark Frostad said, "He's (jockey Alex Solis) sat on her a few times now and he did a great job with her."