Queen's Plate Day is one of the biggest racedays of the year at Woodbine, attracting the biggest crowd of the year. Those who filled the grandstand and the apron on Sunday afternoon were treated to two other stakes races on the undercard, both run over the E.P. Taylor Turf Course which is outside of the main Polytrack oval. After a rather wet week in Toronto, the sun came out on Plate day and dried the turf course enough to be rated "firm". 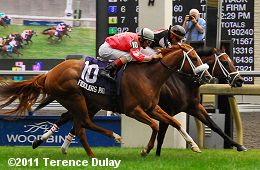 The first stakes race on the card was the $200,000 Highlander Stakes (G2), a 6 furlong sprint on the turf for older horses. Fiddlers Patriot was sent off as the 3-1 favorite in the field of 10 off allowance wins at Belmont and Monmouth, over 9-2 second choice Nordic Truce, an allowance winner at Gulfstream last out, and 5-1 third choice Stormy Lord, winner of the Connaught Cup (G3).

Jockey Jono Jones sent 9-1 Essence Hit Man to the lead down the backstretch and around the turn through fractions of 22.14 and 44.89 while as many as 1 1/2 lengths in front of 7-1 Signature Red stalking him second. In mid-stretch, Signature Red moved up to take the lead through 5/8 in 56.52, and was all out to hold off favorite Fiddlers Patriot late to win by a nose in 1:09.00 over the firm course. It was another 1 1/4 lengths back to 16-1 Heros Reward third. Sheldon Russell and Dale Capuano, the jockey and trainer of Heros Reward, claimed foul against the winner but this was disallowed by the stewards.
Results Chart 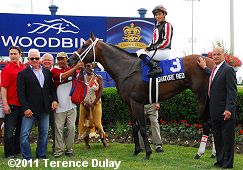 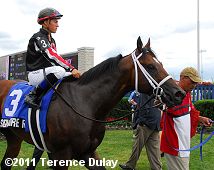 Left: Signature Red in the winner's circle. His trainer Sid Attard said, "This horse is much, much better on the grass. He’s a turf horse, really. With his class, he always runs good on the Poly, but he doesn't run as good on the turf. The owner said (to the jockey), I want you to be right up there, right up there. I said (to the jockey), listen to him, listen to the owner, whatever he says, you do."

Right: Signature Red after the race. 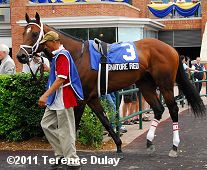 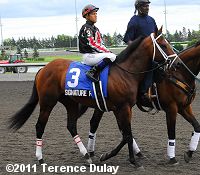 Left: Signature Red in the paddock before the race. He also won this event last year, and had not won since that race. 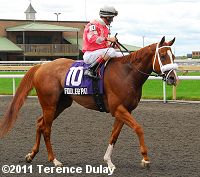 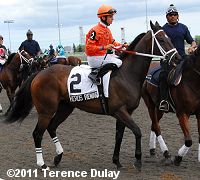 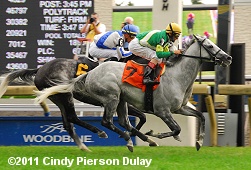 Immediately after the arrival of the vice-regal Lt. Gov. David Onley, a field of 7 older horses contested the $150,000 Singspiel Stakes (G3) at 1 1/2 miles, one complete lap of the E.P. Taylor Turf Course. Pan American Stakes (G3) winner Rahy's Attorney was sent off as the 2-1 favorite off an allowance win last out, over 5-2 second choice and 2009 winner Musketier, off his 5th place effort in the Louisville Handicap (G3), and 3-1 third choice Grassy, second in the Three Coins Up at Belmont. 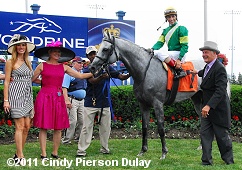 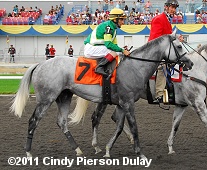 Left: Musketier in the winner's circle. Trainer Roger Attfield said, "Johnny couldn’t get him covered up, I could see that. Johnny is a very smart rider and he knows how long this stretch is here. He moved a little bit earlier than he wanted to, but he took hold of him a little bit longer so he had some left for the last bit. He did a great job and he’s a lovely old horse."

Right: Musketier returns after the race. His jockey John Velazquez said, "I carried out a little bit going into that first turn. (Grassy) dropped in so I followed him and saved some ground. I got to the 1/2 mile pole and got some momentum going. It took some urging to get him going. I was a little bit early to get after him, but I got at him at the 1/16 pole and won.” 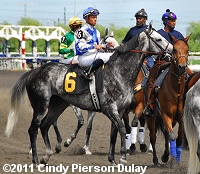 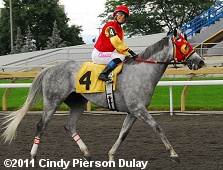 Left: Second place finisher Grassy in the post parade. The 3-1 third choice stalked he pace under jockey Garrett Gomez, gained the lead at the 3/16 pole but failed to hold off the winner. The Christophe Clement trainee improved his record to 4 wins, 3 seconds, and 2 thirds in 13 starts, earning $310,050 for owner-breeders Claiborne Farm and Adele B. Dilschneider.

Right: Third place finisher Windward Islands returns after the race. The 6-1 shot stalked the pace on the rail under Chantal Sutherland third, but could not improve late finishing 3rd beaten 1 1/4 lengths. the Mark Frostad trainee improved to 5 wins, 4 seconds, and 4 thirds in 22 starts, earning $689,393 for owner Sam-Son Farms.